For-profit schools...for some, too late 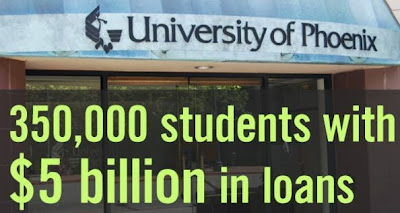 "For-profit schools, accused of preying on low-income students, are trying to lift their standards but it may be too little too late."

REUTERS
The changes that schools have made -- like scrapping open admissions and offering free orientation periods -- will not deter the U.S. Education Department from tightening regulations that could cost some schools federal dollars. And they will not head off even tougher legislation promised by Sen. Tom Harkin, according to sources knowledgeable about the two processes.

For-profit schools, many of which advertise on television, offer culinary, medical assistant and other non-degree programs as well as college educations. For-profit post-secondary schools were expected to generate $29.2 billion in revenue in 2010, according to the research and consulting firm Eduventures.

But the sector's reputation has been hurt by a government investigation that found deceptive marketing practices and by congressional hearings that featured low-income students who went deep into debt to finance school only to end up jobless.

Anticipating regulatory changes, Apollo Group Inc (APOL.O), the sector's largest company, created a free three-week program at its University of Phoenix, to give students a taste of school. Former Phoenix students had a 12.9 percent default rate in the 2008 fiscal year.

Corinthian Colleges (COCO.O), where former students of one of its schools had a 2008 default rate of 35.2 percent, no longer accepts students without high school degrees at some of its Everest schools or WyoTech. "We had been decreasing that enrollment already, but we decided to do it all at once," said Corinthian spokesman Kent Jenkins.

The companies' share prices have taken a hit during the months-long battle over the new rules. An S&P education index .15GSPEDUS high for the year has been 145.54 and its low is 76.37.

Trace Urdan, a Signal Hill analyst, said he expected few share price changes when some final rules are announced around November 1. "Based on what we know about the rules, everybody has either exited the sector, they're hanging tough or they're short," he said.

"It's painful to go through this," said analyst Jeffrey Silber of BMO Capital Markets, who specializes in the sector. "From a political perspective, it's definitely the right thing to do," he added, calling the steps "a start."

There may be more bad news for the sector next year. Democratic staffers in Congress -- where lawmakers are mulling a bill to rein in the industry -- took an extremely skeptical view of Corinthian's decision to exclude students without high school diplomas.

Policymakers view the schools' policy shifts "with skepticism because the timing is curious," said a congressional staffer, noting the upcoming new regulations.

Harkin, an Iowa Democrat, is expected to introduce legislation next year that would be tougher than the regulations, said the staffers. Neither was authorized to be quoted for attribution.

Even a month of orientation "is not as effective as they want people to think" because students only realize they are at risk of flunking after four or five months, the staffer said.

Recruitment tactics are under scrutiny. Five for-profit schools are under separate investigation in Florida for unfair and deceptive recruiting.

Kaplan, owned by Washington Post Co (WPO.N), now allows students to withdraw after a few weeks free of charge and has suspended incentives for recruiters, said Ron Iori, a spokesman for the company.

Lincoln Educational Services (LINC.O) said it was raising its minimum test scores for admission. Former students of the Lincoln College of Technology in Texas had a 2008 default rate of 26.3 percent.

The Education Department has issued a proposed rule saying that the federal government would cease lending to programs if more than 65 percent of former students failed to repay loans. A final rule has been delayed but is to be issued in 2011.

In about a week, the Education Department will issue the final version of a larger package of rules that would require for-profit schools to eliminate all incentives for admissions recruiters and require them to release data to students about graduation and job placement rates.

Russell Kitchner, a lobbyist for the for-profit American Public Education (APEI.O) which specializes in training military personnel, was one of several officials at for-profit schools who was disturbed by student default rates at other schools that topped 20 and 30 percent. One of APEI's schools has a default rate of 5.2 percent.

"There are two factors that bother me about those rates. It's institutions that bring students in, grab a few bucks and have somebody else waiting for that seat. That's bad business," he said.

"There are some for-profit schools that need to go away," he said. "You can quote me on that."
Posted by Mercury at 7:16 AM