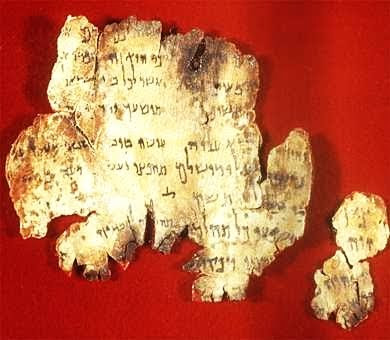 The project aims to use space-age technology to create the clearest images possible of the ancient documents.

DiscoveryNews
The Dead Sea scrolls, containing some of the oldest-known surviving biblical texts, are to go online as part of a collaboration between Israeli antiquities authorities and Google, developers said on Tuesday.

The $3.5-million project by the Israeli Antiquities Authority and the internet giant's local R&D division aims to use space-age technology to produce the clearest renderings yet of the ancient scrolls and make them available free of charge to the public.

"This is the most important discovery of the 20th century, and we will be sharing it with the most advanced technology of the next century," IAA project director Pnina Shor told reporters in Jerusalem.

The IAA will begin by using multi-spectral imaging technology developed by the US National Aeronautics and Space Administration to produce high-resolution images of the sometimes-faded texts that may reveal new letters and words.

They will then partner with Google to place the images online in a searchable database complemented by translation and other scholarly tools.

"Imagine a world where everybody with an internet connection is able to access the most important works of human history," Google's Israel R&D director Yossi Mattias said at the same press conference.

He said the project would build on similar efforts by Google to put the public domain material of several European libraries online.

Shor said the first images should be posted online in the next few months, with the project completed within five years.

"From the minute all of this will go online there will be no need to expose the scrolls anymore, and anyone in his office or (on) his couch will be able to see it," she said.

The 900 biblical and other manuscripts, comprising some 30,000 fragments, were discovered between 1947 and 1956 in the Qumran caves above the Dead Sea and photographed in their entirety with infra-red technology in the 1950s.

The parchment and papyrus scrolls contain Hebrew, Greek and Aramaic writing, and include several of the earliest-known texts from the Bible, including the oldest surviving copy of the Ten Commandments.

The oldest of the documents dates to the third century B.C. and the most recent to about 70 A.D., when Roman troops destroyed the Second Jewish Temple in Jerusalem.

The artifacts are housed at the Israel Museum in Jerusalem, where the larger pieces are shown at the dimly lit Shrine of the Book on a rotational basis in order to minimize damage from exposure.

When not on show, they are kept in a dark, climate-controlled storeroom in conditions similar to those in the Qumran caves, where the humidity, temperature and darkness preserved the scrolls for two millennia.
Posted by Mercury at 10:34 AM