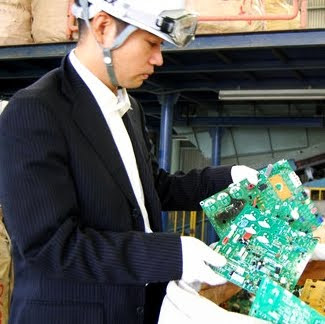 The New York Times
Two decades after global competition drove the mines in this corner of Japan to extinction, Kosaka is again abuzz with talk of new riches.

The treasures are not copper or coal. They are rare-earth elements and other minerals that are crucial to many Japanese technologies and have so far come almost exclusively from China, the global leader in rare earth mining.

Recent problems with Chinese supplies of rare earths have sent Japanese traders and companies in search of alternative sources, creating opportunities for Kosaka.

This town’s hopes for a mining comeback lie not underground, but in what Japan refers to as urban mining — recycling the valuable metals and minerals from the country’s huge stockpiles of used electronics like cellphones and computers.

The shipping ban was still in effect on Monday evening in Japan, an industry official said, though a trickle of shipments seemed to be seeping out as a result of uneven enforcement of the ban by customs officers at various ports. China has allowed exports of Chinese-made rare earth magnets and other rare earth products to Japan, but not semi-processed rare earth ores that would enable Japanese companies to make products.

The cutoff has caused hand-wringing at Japanese manufacturers, from giants like Toyota to tiny electronics makers, because the raw materials are crucial to products as diverse as hybrid electric cars, wind turbines and computer display screens.

Late last week, Japan’s trade minister, Akihiro Ohata, said he would ask the government to include a “rare earth strategy” in its supplementary budget for this year.

In Kosaka, Dowa Holdings, the company that mined here for over a century, has built a recycling plant whose 200-foot-tall furnace renders old electronics parts into a molten stew from which valuable metals and other minerals can be extracted. The salvaged parts come from around Japan and overseas, including the United States.

Besides gold, Dowa’s subsidiary, Kosaka Smelting and Refining, has so far successfully reclaimed rare metals like indium, used in liquid-crystal display screens, and antimony, used in silicon wafers for semiconductors.

The company is trying to develop ways to reclaim the harder-to-mine minerals included among the rare earths — like neodymium, a vital element in industrial batteries used in electric motors, and dysprosium, used in laser materials.

Although Japan is poor in natural resources, the National Institute for Materials Science, a government-affiliated research group, says that used electronics in Japan hold an estimated 300,000 tons of rare earths. Though that amount is tiny compared to reserves in China, which mines 93 percent of the world’s rare earth minerals, tapping these urban mines could help reduce Japan’s dependence on its neighbor, analysts say.

The global rare earth market is small by mining standards — just $1.5 billion last year, although its value is rising as prices have surged in response to Chinese restrictions on exports.

Concern over China’s hoarding of rare earths has also been spreading to the United States. Although China has not specifically blocked shipments to any place but Japan, it had already tightened its overall export quotas of the minerals, announcing in July that it would reduce them by 72 percent for the rest of the year.

Last Wednesday in Washington, the House of Representatives approved a bill authorizing research to address the supply of rare earths, saying the minerals were critical to energy, military and manufacturing technologies.

Japanese companies generally avoid discussing their mineral holdings. But experts say that some manufacturers have been stockpiling rare earths, building inventories ranging from a few months’ to a year’s worth. Last Friday, Mr. Ohata, the trade minister, said the government was considering starting a stockpile of rare earths as a buffer against trade interruptions.

Heightened interest in alternative sources has also been an impetus to plans to reopen or establish new rare earth mines in a handful of countries around the world, including South Africa, Australia and Canada, along with the United States, where Molycorp intends to expand a mine in Mountain Pass, Calif. The Japanese trading company Sojitz is negotiating the rights to a rare earth mine in Vietnam, while the industrial conglomerate Sumitomo plans to work with Kazakhstan’s government to recover rare earth elements from uranium ore residues.

Japan is also pushing for new manufacturing processes that do not require rare earths. Last week, the government-affiliated New Energy and Industrial Technology Development Organization, or N.E.D.O., announced that it had developed a motor for hybrid vehicles that used cheap and readily available ferrite magnets, instead of the rare earth magnets typically required.

Hitachi Metals, meanwhile, is working on a magnet that minimizes the use of rare earths by employing copper alloys.

“Japanese companies have become painfully aware of the risks of relying so greatly on China for strategic metals,” said Akio Shibata, chief representative at the Marubeni Research Institute in Tokyo.

He said Japanese industry might benefit from researching alternatives to rare earths and developing recycling methods, noting how the oil shocks of the 1970s helped eventually make Japan a leader in fuel-efficiency technologies.

Various players have tried to recycle rare earths and metals in Japan. Last year, Hitachi began to experiment to extract rare earths from magnets in old computer hard drives, though the company said the project was not expected to go into operation until 2013.

But it is Dowa, the company that has mined in Kosaka since 1884, that has emerged as the field’s early leader. And it could not come a moment too soon for this town of 6,000, which is littered with the remnants of its old ore mines: tunnels overgrown with weeds, old railroad tracks, and an abandoned bathhouse where miners once sponged off the grime from their long days underground.

The mines operated up to 1990, until a surging yen and international competition drove operations out of business. Now, portions of the old red-brick ore processing factories serve as part of Dowa’s recycling plant, which started fully operating two years ago.

“It is important for Japan to actively tap its urban mines,” said Kohmei Harada, a managing director at the National Institute of Materials Science, and an enthusiastic supporter of recycling efforts like the one in Kosaka. Apart from rare metals and earths, Mr. Harada estimates that about 6,800 tons of gold, or the equivalent of about 16 percent of the total reserves in the world’s gold mines, lie in used electronics in Japan.

“Japan’s economy has grown by gathering resources from around the world, and those resources are still with us, in one form or another,” he said.

But this form of recycling is an expensive and technically difficult process that is still being perfected.

At Dowa’s plant, computer chips and other vital parts from electronics are hacked into two-centimeter squares. This feedstock then must be smelted in a furnace that reaches 1,400 degrees Celsius before various minerals can be extracted. The factory processes 300 tons of materials a day, and each ton yields only about 150 grams of rare metals.

Though Dowa does not disclose the finances of its Kosaka recycling operations, the company says that after a year of operating at a low capacity, the factory now turns a profit. Over all, net income at Dowa Holdings, which deals in industrial metals and electronic materials, almost tripled in the quarter ended June 30, to 6.52 billion yen, or $78.2 million, as global industrial production rebounded.

As Dowa has turned its attention to rare earths, a priority is developing ways to render neodymium, which is used in powerful magnets. Its extraction has proved costly. Neodymium is found only in tiny quantities in parts used in the speakers of cellphones, for example, making it a challenge to collect meaningful amounts, said Utaro Sekiya, the manager of Dowa’s recycling plant.

Finding enough electronics parts to recycle has also grown more difficult for Dowa, which procures used gadgets from around the world. A growing number of countries, including the United States, are recognizing the value of holding onto old electronics. And China already bans the export of used computer motherboards and other discarded electronics parts.

“It’s about time Japan started paying more attention to recycling rare earths,” Mr. Sekiya said. “If we can become a leader in this field,” he said, “perhaps China will be the one coming to us to buy our technology.”
Posted by Mercury at 3:32 PM