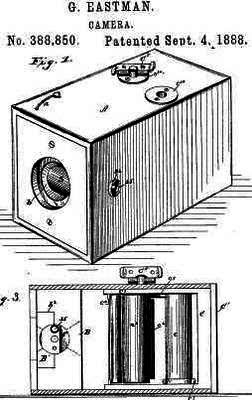 A significant patent was granted to David Houston on this day 129 years ago--photographic roll film.

Ben Nemenoff
Although not a photographer himself and virtually unknown today, David Houston made some of the most significant contributions to the field of photography. An aspiring inventor who was a farmer by trade, he held patents for inventing the first holders for flexible roll film and for designs of some of the earliest folding and panoramic cameras. In fact, between 1881 and 1902, twenty-one different cameras or camera parts were registered by Houston with the U.S. Patent Office. Most of these items were eventually mass produced, in some variant of his original designs, by the Eastman Kodak Company in Rochester, New York.

Houston was born on June 14, 1841 in Glasgow, Scotland to Peter and Margaret Houston. That same year, the Houston family emigrated to the United States, living briefly in New York City before settling in Albany, New York. In 1847, the family moved again, this time to the central Wisconsin village of Cambria.

In 1880, at the age of 39, Houston moved west to the Dakota Territory and purchased 480 acres near the town of Hunter in what would one day become North Dakota. Over the course of his life, he would acquire a total of 4,000 acres and become one of the most profitable farmers in the region.

It is unclear when he started to try his hand at invention, but on June 11, 1881, he filed his first request for a patent. The invention was a roll film holder. Flexible roll film had not yet been invented, but Houston anticipated that one day it would be. (Photographers were still making negatives on a glass plate coated with a photosensitive emulsion.) His holder consisted of two cylindrical reels, one on each side of the camera between the lens and the back door of the body. The reel on the photographer’s right would be empty; the one on the left would contain a roll of unexposed film. The photographer would wind part of the film behind the lens using a winder on the right reel. Once the photograph had been made, the exposed film would be wound into the right reel, pulling behind it a new piece of unexposed film. (This principle is still widely used today.) The patent (number 248,179) was granted to Houston on October 11, 1881.

True to Houston’s vision, the Eastman Dry Plate and Film Company patented the first paper roll film in 1884. (It was nicknamed “stripping film” because of the paper backing that was “stripped off” during processing.) In 1887, Reverend Hannibal Goodwin of Newark, New Jersey invented a roll film with a transparent backing that was considerably more flexible. The Eastman Company acquired this in 1889.

Houston eventually licensed his invention for $700 to William H. Walker of Rochester, New York. Walker agreed to manufacture and market the camera across the country, but sold his rights to the Eastman Company a few days after acquiring them from Houston.

On December 28, 1886, Houston was granted a new patent for a revised version of his original invention. On May 14, 1889, he sold the rights to this patent to the Eastman Company for $50. Additionally, the company paid Houston $5,000 for the rights to his original patent.

(On a related matter, Houston’s niece Mina Fisher Hammer wrote in her book History of the Kodak that her uncle suggested the name “Kodak” to George Eastman. She claims that this was meant as a variation of “Nodak,” in reference to Houston’s adopted state. This may or may not be true, but it is important to note that Kodak was trademarked by George Eastman in 1888, before Houston sold his patents.)

The Eastman Dry Plate and Film Company changed its name to the Eastman Kodak Company and continued to purchase patent rights from Houston. These included folding, panoramic, and magazine cameras along with a self-loading magnesia flash lamp and a daylight-loading camera that used cartridge film. In 1912, after Houston’s death, his estate transferred his remaining patents to the Eastman Company.

Houston died in Hunter on May 6, 1906. He was survived by his wife Annie Laurie (Pencille) - a singer and musician - and their son David.
Posted by Mercury at 7:17 AM