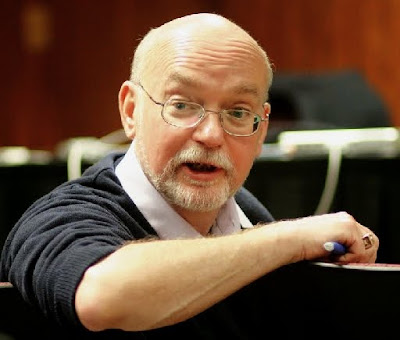 The New York Times
John Huchra, a man who loved telescopes and whose pioneering maps of a bubbly universe challenged notions of how the galaxies were born, died on Friday at his home in Lexington, Mass. He was 61.

The cause was a heart attack, his wife, Rebecca M. Henderson, said.

Dr. Huchra (pronounced HUCK-rah) was an enthusiastic observer, logging as many as 130 nights a year at telescopes around the world. He was gregarious as well, bringing home students for Thanksgiving and holding a leadership role or membership in virtually every important body related to astronomy, including the American Astronomical Society, of which he had been president.

“His passing has upset more of us than I remember for any other astronomer,” said Tod Lauer, an astronomer at the National Optical Astronomy Observatory in Tucson.

Dr. Huchra will be remembered as well for what looks for all the world like a child’s stick-figure drawing of a man, but in fact is a map showing how the galaxies are distributed through about 600 million light-years of space.

Astronomers had long presumed that if they looked out far enough beyond the Local Group of galaxies to which the Milky Way belongs, galaxies would be spread more or less evenly. Dr. Huchra’s map, produced in 1986 with Margaret J. Geller and Valérie de Lapparent, showed instead that the galaxies seemed to be confined to great sheets arcing around enormous dark and presumably empty voids millions of light-years across, clustering in dense knots where the sheets intersected.

“Margaret coined the analogy of the soap bubble universe, and it stuck,” Dr. Huchra wrote on a Web site for the Harvard-Smithsonian Center for Astrophysics, where he spent his career.

Since then, maps engulfing larger and larger swaths of a foamy-looking cosmos have become a staple of astronomy. “Today, all the big computer simulations show that a dark matter universe will clump up into a cosmic web of voids and filaments,” Robert Kirshner, a Harvard astronomer, said. “John’s work with Margaret showed the way to this common view.”

John Peter Huchra was born on Dec. 23, 1948, in Jersey City and grew up in Ridgefield Park, N.J., reading science fiction and popular cosmological books. His father was a railroad conductor and his mother a homemaker.

Dr. Huchra arrived in Cambridge in 1976 as a postdoctoral fellow at the newly created Harvard-Smithsonian Center for Astrophysics and never really left.

He made his first splash in 1978, when he, Marc Aaronson of the University of Arizona and Jeremy Mould, now at the University of Melbourne in Australia, announced that the universe was expanding twice as fast and was therefore only half as old — about nine billion years — as most astronomers had thought.

The work, using the brightness and rotation speeds of spiral galaxies as a cosmic distance marker, propelled the young astronomers into the middle of a bitter, longstanding debate among older astronomers who could not agree within a factor of 2 about the size and age of the universe.

“There are only a handful of people in this game, and they all hate each other,” Dr. Huchra once told an interviewer. “Nobody likes to be proved wrong.”

Paul Schecter of M.I.T. said of the three, “They broke the logjam and came up with something new.” They went on to play a key role in a project that used the Hubble Space Telescope to measure the expansion rate of the universe.

Meanwhile Dr. Huchra had also joined an effort led by Marc Davis, then at the Center for Astrophysics and now at the University of California, Berkeley, to map the nearby universe. In an expanding universe, the relative distances of galaxies could be obtained from the speeds with which they were rushing away from us. The speeds are known as redshift velocities, for their effect on a galaxy’s spectrum.

Dr. Huchra, drawing on experience working on Palomar Mountain during his Caltech days, was the only group member who had measured a galaxy redshift, so he did most of the observing for the project, on a 60-inch telescope on Mount Hopkins in Arizona. The work involved running upstairs and downstairs every few minutes between a recording device in the observatory’s basement and its dome to turn the telescope to find the next galaxy.

The first Harvard-Smithsonian survey, completed in 1981, mapped 2,400 galaxies. The second one, directed by Dr. Huchra and Dr. Geller, was completed in 1995 and mapped 18,000. Besides the famous stick figure, the survey revealed a “Great Wall” of galaxies 600 million light-years long and 250 million light-years wide. It is one of the largest cosmic structures ever discovered.

Besides his wife, a professor at Harvard Business School whom he married in 1992, Dr. Huchra is survived by their son, Harry; his parents, Mieczyslaw Huchra and Helen Lewicki, of Ridgefield Park; and a sister, Christine Lehman, of Murrells Inlet, S.C.

Dr. Huchra was director of the Smithsonian’s Fred Lawrence Whipple Observatory on Mount Hopkins from 1994 to 1998 and interim director of the Center for Astrophysics in 2004. He became vice provost for research at Harvard and a tenured professor there in 2005, but stepped down from the provost job a year later after a heart attack.

One of his most enduring appointments, however, is in the sky. The Harvard-Smithsonian survey found a galaxy in the constellation Pegasus so perfectly aligned with a distant quasar that the galaxy’s gravitational field bends and splits the light from the quasar into four separate images around itself, forming what is called an Einstein Cross. Dr. Huchra discovered the formation while inspecting data from the survey in 1985.

It is now known as Huchra’s Lens.

An earlier version of this article inserted an incorrect date in a sentence about the discovery of Huchra’s Lens. Dr. Huchra made the discovery while inspecting data from a survey in 1985, not 1990.

John Huchra [Wikipedia]
Posted by Mercury at 6:52 AM