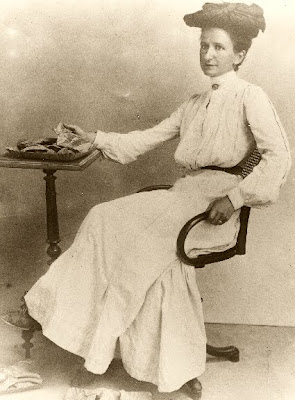 Harriet Boyd Hawes was the first archeologist to discover and excavate a Minoan settlement. She was born October 11, 1871 in Boston, Massachusetts, U.S.A. and graduated from Smith College in Northampton, Massachusetts in 1882 (1892?). After working as a teacher for four years, she started graduate work at the American School of Classical Studies in Athens, Greece. During her stay in Greece she also served as a volunteer nurse in Thessaly during the Greco-Turkish War. She asked her professors to be allowed to participate in the school's archeological fieldwork, but instead she was being encouraged to become an academic librarian. Frustrated by lack of support, she took the remainder of her fellowship and went on her own in search of archeological remains on the island of Crete. This was a very brave move, since Crete was just emerging from the war and was far from being safe.

In 1900, she returned to the United States and started teaching Greek and Greek archeology at Smith College. Between 1901 and 1904, while on leave of absence from Smith, she returned to Crete where she discovered and excavated a Minoan town at Gournia, dating to the Early Bronze Age, over 3,000 years ago. She was the first woman to direct a major field project, her crew consisted of over 100 workers. In 1902, she described her discovery during a national lecture tour and was the first woman to speak before the Archeological Institute of America. The report of her findings was published in 1908 by the American Exploration Society. She excavated many more Bronze and Iron Age settlements in the Aegean and became a recognized authority on the area. In 1910, Smith college bestowed on her an honorary degree.

In 1917, Hawes went to Corfu with supplies for soldiers wounded in World War I. After her return home, she continued her support for the war effort by giving fund-raising lectures on behalf of the Smith College Relief Unit. Between 1920 and her retirement in 1936, she lectured at Wellesley College, Wellesley, Massachusetts on pre-Christian art. 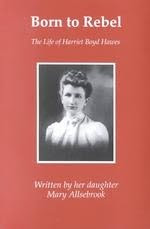 Born to Rebel: The Life of Harriet Boyd Hawes

Mary Allsebrook
Harriet Boyd was the first woman to lead an archaeological excavation in the Aegean. At a time when few women travelled on their own, she discovered, excavated and published an account of the Minoan town of Gournia in Crete. She was the first woman to lecture to the Archaeological Instituite of America - ten times in fourteen days in January 1902. While prominent as a lecturer and teacher, archaeology was only a part of her life: in 1897 she was nursing with the Red Cross in the Greco-Turkish war, in 1915 she was nursing Serbian typhoid victims on Corfu, and by 1917 she was in Northern France setting up a rehabilitation centre within sound of the front. While the past and its arts were her profession, the present and the future were her passionate interest - whether local social problems in her home town of Boston or international affairs which took her to lunch with Mrs Roosevelt at the White House. Mary Allsebrook's light-hearted and extremely readable account of her mother's extraordinary experiences shows Harriet Boyd to be truly one of America's pioneers. 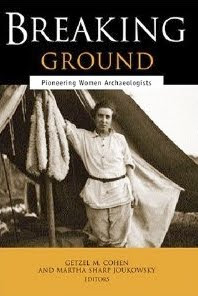 Getzel M. Cohen and Martha Sharp Joukowsky (Editors)
Breaking Ground examines the lives of twelve pioneer archaeologists -- women such as Jane Dieulafoy, Gertrude Bell, and Dorothy Garrod, for example -- in the early days of the discipline, tracing their paths from education in the classics to travel and exploration and ultimately to international recognition in the field. The intended readership for this book is broad: it will include those interested in the history of archaeology, European social history as well as gender studies. But the interest inherent in these biographies will reach well beyond defined disciplines and subdisciplines -- for the life of each one of these exciting and accomplished individuals is an adventure story in itself.