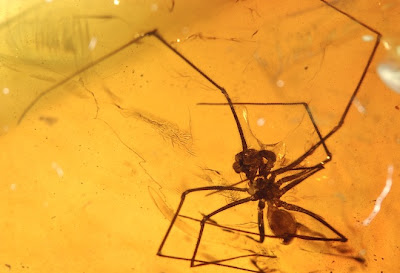 Science News
Researchers have discovered more than 700 new species of prehistoric insects in a 50-million-year-old amber deposit in India.

The 330 lb. deposit, dubbed Cambay amber, was unearthed in lignite mines in the Cambay Shale on the coast of India's Gujarat province. It is the oldest evidence of a tropical broadleaf rainforest in Asia, said the international team of researchers from Germany, India and the United States.

The bees, termites, spiders, and flies entombed in the newly excavated deposit challenge conventional wisdom that India was an isolated island-continent during the Early Eocene, 50-52 million years ago.

In fact, many of the new species are related to those from far-away corners of the world, indicating that despite its isolation in the ocean the region was much more biologically diverse than previously believed, the scientists said.

"We know India was isolated, but when and for precisely how long is unclear," said David Grimaldi, curator in the Division of Invertebrate Zoology at the American Museum of Natural History.

"The biological evidence in the amber deposit shows that there was some biotic connection."

Dr. Jes Rust, professor of Invertebrate Paleontology at the University of Bonn in Germany, said the discovery reveals clues about India’s ancient history.

"The insects trapped in the fossil resin cast a new light on the history of the sub-continent,” he said.

"The amber shows, similar to an old photo, what life looked like in India just before the collision with the Asian continent," said Rust, who led the team of researchers.

The deposits contain numerous insect bodies, some of which are extremely well preserved, despite their age.

"The amber has not been completely polymerized, allowing it to be dissolved easily.”

So far, the scientists have discovered more than 700 arthropods from 55 different genera – mostly insects, but also spiders, mites, and plant parts.

CLUES TO THE PAST

According to the predominant theory of the formation of the continents, there were originally just two “supercontinents” on Earth -- Laurasia in the north and Gondwana in the south.

When Gondwana split up into many smaller pieces some 160 million years ago, most of its parts stayed within the southern hemisphere. However, one large piece is believed to have "broken off", drifting on the ocean in isolation at a speed of roughly 20 centimeters per year towards the north. Eventually, 100-million-years later, this land mass collided with Asia, forming the modern day Indian subcontinent and creating the mighty Himalayan mountains.

Scientists have long believed that drifting along in such isolation would have contributed to a potentially unique plant and animal life unique to the region, something biologists call “endemism”. However, India’s primarily tropical climate has been unfavorable to the preservation of fossils, making it hard to confirm this hypothesis.

So far, the present discovery reveals little endemism. In fact, most of the newly discovered insects show links to modern bugs, as well as those that lived millions of years ago in different parts of the world.

Dr. Rust said this might be explained by land-bridge connections between India and other landmasses during the time the continent drifted across the ocean.

"It is possible for plants to drift hundreds of kilometers on open ocean currents, and in the case of insects, some can fly," Rust told BBC News.

"There are those that are only able to fly during mating, but they can fly at least a few kilometers.”

"Not many are able to cross open seaways, but [they can] drift with plant material. Then there are also very tiny insects and they sometimes simply get blown away, up to the jet stream."

The scientists said the resin that later became Cambay amber originated from an ancient tropical rainforest.

"The Indian amber is from the Lower Eocene and was likely produced by flowering hardwood trees called Dipterocarpaceae, [trees] that predominate in the forests of Southeast Asia today," said Paul Nascimbene of the American Museum of Natural History in New York.

The researchers used chemical fingerprinting to determine the origin of the amber, and analyzed the wood anatomy of fossilized branches and trunks at the site.

"Fossil wood samples were also recovered in association with the amber, [and they] showed that these samples preserved details of the wood's microstructure, pointing to dipterocarps as the probable source," Nascimbene told BBC News.

The researchers were also able to determine the age of the modern rainforest.

Until now, experts believed this type of tropical rainforest, found today all over the South-East Asia, first originated 20 to 25 million years ago. However, the recent discovery disputes that belief, and indicates the rainforest is at least 60 million years old.

"What we have here from India is the earliest fossil evidence of a modern type of tropical rainforest [of the Dipterocarpaceae family] in Asia," said David Grimaldi from the American Museum of Natural History.

"Before, we just had no idea to how ancient the dipterocarp forests that occur in South-East Asia today really are; there really was no indication,” he told BBC News.

Grimaldi said one challenge in determining the modern rainforest's age was the lack of fossil deposits, which are highly uncommon in tropical regions.

"Most of the fossil outcrops are in drier, very eroded areas of the northern hemisphere or southern parts of southern hemisphere, but not so much in the equatorial belt,” he said.

"Most of the fossil evidence from tropical South America indicated that rainforests were no later than Miocene, no more than 25 million years old.”

"And secondly, people for a century or more had always thought of the tropics as a place where species are evolving very rapidly.”

"And perhaps as a result they thought it was a very recent type of ecosystem,” he told BBC News.

"But in reality, they're like an ancient cauldron - they're very ancient ecosystems, at least ancient on land, at least twice [the age we previously thought]."

In addition to the rainforest's age and India's biogeography, the most surprising part of the amber discovery was the enormous number of perfectly preserved insect specimens, most of which have never been seen before.

The unique softness of the Indian amber allowed researchers to totally dissolve the amber using the solvents toluene and chloroform, and then extract the insects, plants and fungi.

"We have complete, three-dimensionally preserved specimens that are 52 million years old and you can handle them almost like living ones," said Rust.

"Of course they are very fragile, but it is still astonishing.”

"We have several examples where it is possible to get a complete specimen out. And of course this opens a new dimension in investigations of this material,” said Rust, adding that this amber deposit was the first important one ever discovered in India.

Although amber is widespread throughout the world, the best-known deposits are in the Baltic region, which contains 80% of the world's known amber, the Dominican Republic and Mexico.

"There are tons of amber [in this Indian deposit], and what is interesting about it is that it was produced in the tropics, the most highly diverse areas in respect to species diversity," said Rust.

"And the fossil record of the terrestrial tropics is not so good, because usually all the organic material gets rotten very quickly."

With tons of amber at their disposal, Rust said the researchers looked forward to uncovering many more mysteries of our ancient world.