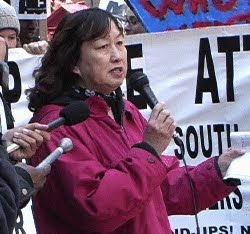 The New York Times
A former administrator at St. John’s University accused of embezzling about $1 million from the college in Queens has now been charged with far more lurid crimes: forcing students to clean, cook and act as her personal servants to keep their scholarships.

The ex-administrator, Cecilia Chang, who served as a dean and vice president at the university, was charged with forced labor and bribery, according to a complaint made public by federal prosecutors on Thursday.

As the dean of the Institute of Asian Studies at St. John’s, Ms. Chang had the authority to grant 15 scholarships a year. The recipients, most of whom were from overseas, were told they had to work 20 hours a week under her supervision.

The students thought they would be doing work related to the university. Instead, according to the prosecutors, she forced them to perform menial tasks at her home in Jamaica Estates, Queens.

One of the students had to drive Ms. Chang’s son to the airport at 3 a.m., the complaint says, and another had to deliver cash to her at Foxwoods Resort Casino in Connecticut.

And she made it clear that if the students did not perform their extracurricular duties, they would lose their scholarships, which were worth at least $5,000, the complaint says. The loss of the scholarships might have forced some of the students to drop out, it adds.

“In addition to the outrageous way she treated her students, in exchange for scholarships, she had them falsify documents,” Charles Kleinberg, an assistant United States attorney, said at Ms. Chang’s bail hearing in Federal District Court in Brooklyn.

Ms. Chang, 57, did not enter a plea or speak during the one-hour hearing, but she stood shaking her head as prosecutors argued that she was a flight risk because she holds a passport from Taiwan, which does not have an extradition treaty with the United States.

Her lawyers argued that by surrendering on Thursday morning, Ms. Chang demonstrated that she would not flee. They added that she was already wearing an electronic monitoring device as part of the bail conditions in the embezzlement case, a 205-count indictment filed by the Queens district attorney’s office in September.

In that case, Ms. Chang is accused of stealing about $1 million from St. John’s. Prosecutors say she used the money to pay for lingerie, casino trips and her son’s tuition.

After three decades at St. John’s, Ms. Chang was suspended when the embezzlement allegations came to light in January, and she was fired in June.

Magistrate Judge Joan M. Azrack set Ms. Chang’s bail at $1.5 million, to be secured by two homes belonging to friends, one in Hempstead, N.Y., and another in Yonkers. If convicted, Ms. Chang faces at least 10 years in prison, prosecutors said.

After the arraignment, Ron Rubenstein, one of Ms. Chang’s lawyers, said that the students’ duties, which never totaled more than 20 hours a week, were a normal part of the St. John’s work-study program.

Many of those tasks were to help with Taiwanese dignitaries visiting Ms. Chang’s house, where she frequently entertained out-of-town guests for fund-raising purposes, Mr. Rubenstein said.

“The fact that this is even a crime is shocking,” he said outside court. “Cooking a meal doesn’t sound at first blush like work-study, but wait till the trial. I’m not going to give you the defense now.”

According to the complaint, one student, identified only as CI1, “drove Chang to the hair salon, to restaurants and to the airport.”

“As a driver,” it adds, “CI1 was also responsible for taking out the garbage and shoveling snow at Chang’s residence.”

St. John’s officials said that the students who worked under Ms. Chang did not have to worry about losing their scholarships.

“If these allegations by federal authorities are true,” Dominic Scianna, a spokesman for St. John’s, said in a statement, “Ms. Chang’s treatment of some students and the environment she created are shocking and in complete violation of all this university stands for.”

A for-sale sign was posted outside Ms. Chang’s house on Thursday; an Internet listing puts the price at $2.89 million, or for rent at $5,800 a month.

"Today I'm speaking on behalf of all new Americans. "New Americans" is anybody in this country who are looked at as foreigners even though they are U.S. Citizens...to ask the U.S. government to treat them with justice...I am here to represent many of these new immigrants.

Protest in front of the INS building that took place from noon to 1pm at 444 Washington Street in San Francisco on June 13, 2003.
Posted by Mercury at 6:15 AM