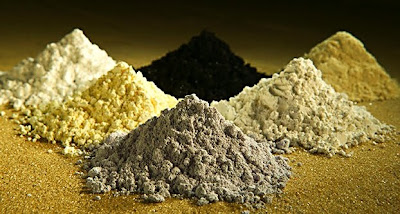 "Japan's rare earth minerals may run out by March: govt"

Japan's stockpile of rare earth minerals could dry up by March or April without fresh imports from China, which has stopped shipping them, a senior Japanese government official said Thursday.

physorg.com
Yoshikatsu Nakayama, vice-minister of the economy, trade and industry, said China was yet to normalise the Japan-bound exports of the minerals used in high-tech products, ranging from televisions to hybrid cars.

"With recycling, imports from sources other than China, and cooperation among (Japanese) companies, it (the existing stock) seems to last until March or April," he told Japanese reporters, according to Jiji Press.

China has not officially declared an export ban, but all of 31 Japanese companies handling rare earth minerals had reported disruption or stopping of shipments.

The Chinese government has denied officially ordering an export ban.

Japanese firms have asked for shipment of the products via a third country, such as South Korea, but Chinese firms have refused, fearing that authorities may find out, the Asahi said.

Since then, China has also reportedly stopped rare earth shipments to the United States in response to US investigation into alleged Chinese subsidies into its green technology sector.

China on Wednesday denied making any fresh cuts in rare earths export quotas, but insisted it reserved the right to restrict shipments.

The Chinese commerce ministry however did not specifically comment on reports that Beijing had halted shipments of the minerals to both Japanese and US firms as a retaliatory move.

The row over rare earths has led to calls in major economies to diversity away from China, fearing that Beijing will increasingly wield its economic clout for political reasons.


A political bargaining chip...China's stingy dispersal of rare earth elements?
Posted by Mercury at 5:26 AM