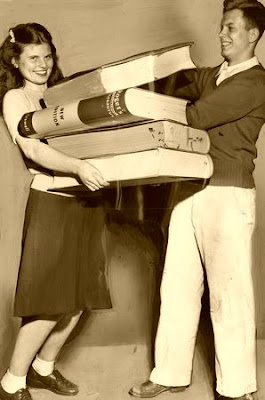 "They're in the business, fundamentally, of making money,"..."That's what drives their decisions — and that's not what libraries have been all about."
"Private company to take over Camarillo's public library"

The city hopes to spend less money and gain more control. The relatively rare move is not popular among librarians.

Los Angeles Times
Set amid subdivisions and strawberry fields, Camarillo's rambling public library is decorated with elaborate tile work, mosaics and Spanish-style light fixtures. It's an airy Mission-style homage to the town's rancho heritage — and it's soon to be run by a private for-profit company based in Maryland.

Hoping to spend less and exert more control, the city has withdrawn from Ventura County's library system and contracted with Library Systems and Services, the only U.S. company that operates public libraries. It's a move that gratifies local officials trying to cut costs but disturbs librarians like Roberta Stevens, president of the American Library Assn.

"They're in the business, fundamentally, of making money," she said. "That's what drives their decisions — and that's not what libraries have been all about."

"As a taxpayer," she said, "I don't comprehend the idea that someone would use tax dollars to run a library on the cheap and send the profits back to Maryland."

Officials of the company, known as LSSI, say they run more efficient libraries. Their pay and benefits are competitive, they say, but employees get 401(k)s with a company match instead of more expensive union-negotiated pensions.

The move toward private management of public libraries has picked up steam as local governments squeeze all they can from diminished budgets. Last August, the Santa Clarita City Council opted out of Los Angeles County's library system and into a contract with the Maryland company. Officials in Ventura also are talking about breaking away from the county's system.

In Camarillo, city officials cast themselves as victims of their own success. Their showplace library drew more patrons than the smaller one it replaced in 2007 but, as a result, the fees they paid to be part of the county's system increased. Unable to negotiate lower rates, Camarillo turned to the private company, which promised savings of about $700,000.

"We wanted better budget and operational control, a better say over what we were purchasing for the collections," said Bruce Feng, Camarillo's city manager. "And the savings can only help everyone."

Santa Clarita officials, too, felt they were giving a lot more to their county system than the county was delivering in library services. It was especially unfair, said assistant city manager Ken Striplin, because Santa Clarita residents pay a special library tax.

The switch will save the city $1.2 million, Striplin said, "the vast majority" of it from no longer having to contribute to library workers' county pensions.

Stevens, of the American Library Assn., was skeptical. "It's a great sales job," she said, "and cities are falling for it."

Frank Pezzanite, co-founder and chief executive of Library Systems and Services, has heard it all before. The company, which operates 67 branch libraries in 15 communities across the U.S., often triggers protests from employees worried about their jobs and residents concerned about cherished institutions. The company, Pezzanite once said, is sometimes seen as "the Darth Vader of the industry."

A librarian himself, Pezzanite didn't win any fans in the profession when the New York Times quoted him deriding librarians: "You can go to a library for 35 years and never have to do anything, and then have your retirement."

In an interview this week, he said he was quoted "out of context."

"Anyone who works in a library is an unsung hero in my book," he said.

When it takes over a library's operations, Pezzanite said, the company "believes in institutional memory" and tries to keep as many employees as possible.

To a patron, the change to the private company can make going to the library "much more pleasurable," said Bob Windrow, the company's vice president for sales.

"In some cases, we use greeters at the door," he said. And employees are instructed in the '10-foot rule' — saying hello and offering help if they're within 10 feet of a patron.

Employees, he said, are "empowered'' to buy another copy or two of bestsellers that generate a big demand. In many libraries, he said, they have to seek permission through a time-consuming bureaucracy.

Founded in 1981, the company started out doing various jobs for federal libraries. In 1997, it was hired to run the libraries in Riverside County, the first such arrangement in the U.S.

Last June, Riverside County released a report that amounted to a rave review for the company. During its tenure, the system's hours nearly doubled, book circulation soared and the number of facilities increased from 24 to 33. Literacy programs and outreach to Spanish-speaking customers thrived.

"For us, the model works," said Tonya Kennon, the county's chief librarian. "Even this past year, we didn't cut staff and we didn't cut hours."

Still, critics contend that company is lacking in transparency.

Pezzanite declined to pinpoint its anticipated profit in Camarillo, calling such information "proprietary." However, both he and city officials dispute the skeptics and say Camarillo will receive exhaustive reports about its library's operations.

Whether such information matters to most library users is an open question.

"The average person wouldn't know the difference," said Lisa Snell, a Riverside mother and director of education for the libertarian Reason Foundation. Mothers take their children to story times and residents sign up for book clubs. "To a consumer," she said, "the change has been seamless."
Posted by Mercury at 6:34 AM