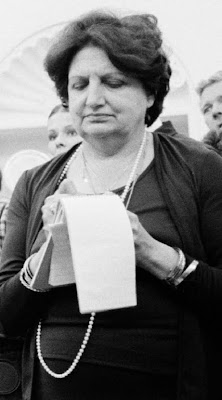 White House correspondent Helen Thomas may have been slightly politically incorrect but she has the courage to stick with her statement and defend her position. Have we become a nation overly sensitive? Were the meaning of her words taken too broadly and out of context? What is wrong with criticism? Is the nation Israel immune of comment?

"Helen Thomas stands by her controversial comments about Israel"

USA TODAY
Veteran White House correspondent Helen Thomas, in her first interview since she was forced to retire, stands by her controversial comments about Israel, but says no one can make such remarks "and survive."

The 90-year-old Thomas tells Scott Spears, a reporter for WMRN radio in Marion, Ohio, that her comments were "exactly what I thought," but that she soon realized that it would cost her job.

"I hit the third rail," she says in a sometimes emotional 35-minute interview that was broadcast today. "You cannot criticize Israel in this country and survive."

Listen to the full interview here.

Thomas resigned as a columnist for Hearst News Service in June after a rabbi and independent filmmaker videotaped her outside the White House calling on Israelis to get "out of Palestine."

Asked whether she is anti-Semitic, she responded "Baloney!" She said she wants to be remembered for "integrity and my honesty and my belief in good journalism" and would like to work again.

Spears said Thomas agreed to the interview because the two had developed a friendship during previous interviews.

Thomas describes Sarah Palin as "very conservative, reactionary, unbelievable." She says the former Alaska governor is ambitious enough to run for president, but adds, "That would be a tragedy, a national tragedy."
Posted by Mercury at 7:05 AM