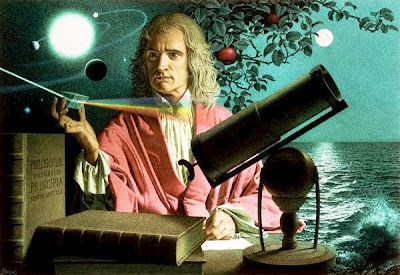 "Moonlighting as a Conjurer of Chemicals"

The New York Times
Sir Isaac Newton was a towering genius in the history of science, he knew he was a genius, and he didn’t like wasting his time. Born on Dec. 25, 1642, the great English physicist and mathematician rarely socialized or traveled far from home. He didn’t play sports or a musical instrument, gamble at whist or gambol on a horse. He dismissed poetry as “a kind of ingenious nonsense,” and the one time he attended an opera he fled at the third act. Newton was unmarried, had no known romantic liaisons and may well have died, at the age of 85, with his virginity intact. “I never knew him to take any recreation or pastime,” said his assistant, Humphrey Newton, “thinking all hours lost that were not spent on his studies.”

No, it wasn’t easy being Newton. Not only did he hammer out the universal laws of motion and gravitational attraction, formulating equations that are still used today to plot the trajectories of space rovers bound for Mars; and not only did he discover the spectral properties of light and invent calculus. Sir Isaac had a whole other full-time career, a parallel intellectual passion that he kept largely hidden from view but that rivaled and sometimes surpassed in intensity his devotion to celestial mechanics. Newton was a serious alchemist, who spent night upon dawn for three decades of his life slaving over a stygian furnace in search of the power to transmute one chemical element into another.

Newton’s interest in alchemy has long been known in broad outline, but the scope and details of that moonlighting enterprise are only now becoming clear, as science historians gradually analyze and publish Newton’s extensive writings on alchemy — a million-plus words from the Newtonian archives that had previously been largely ignored.

Speaking last week at the Perimeter Institute for Theoretical Physics in Waterloo, Ontario, William Newman, a professor of the history and philosophy of science at Indiana University in Bloomington, described his studies of Newton’s alchemical oeuvre, and offered insight into the central mystery that often baffles contemporary Newton fans. How could the man who vies in surveys with Albert Einstein for the title of “greatest physicist ever,” the man whom James Gleick has aptly designated “chief architect of the modern world,” have been so swept up in what looks to modern eyes like a medieval delusion? How could the ultimate scientist have been seemingly hornswoggled by a totemic psuedoscience like alchemy, which in its commonest rendering is described as the desire to transform lead into gold? Was Newton mad — perhaps made mad by exposure to mercury, as some have proposed? Was he greedy, or gullible, or stubbornly blind to the truth?

In Dr. Newman’s view, none of the above. Sir Isaac the Alchemist, he said, was no less the fierce and uncompromising scientist than was Sir Isaac, author of the magisterial Principia Mathematica. There were plenty of theoretical and empirical reasons at the time to take the principles of alchemy seriously, to believe that compounds could be broken down into their basic constituents and those constituents then reconfigured into other, more desirable substances.

Miners were pulling up from the ground twisted bundles of copper and silver that were shaped like the stalks of a plant, suggesting that veins of metals and minerals were proliferating underground with almost florid zeal.

Pools found around other mines seemed to have extraordinary properties. Dip an iron bar into the cerulean waters of the vitriol springs of modern-day Slovakia, for example, and the artifact will emerge agleam with copper, as though the dull, dark particles of the original had been elementally reinvented. “It was perfectly reasonable for Isaac Newton to believe in alchemy,” said Dr. Newman. “Most of the experimental scientists of the 17th century did.”

Moreover, while the alchemists of the day may not have mastered the art of transmuting one element into another — an ordeal that we have since learned requires serious equipment like a particle accelerator, or the belly of a star — their work yielded a bounty of valuable spinoffs, including new drugs, brighter paints, stronger soaps and better booze. “Alchemy was synonymous with chemistry,” said Dr. Newman, “and chemistry was much bigger than transmutation.”

For Newton, alchemy may also have proved bigger than chemistry. Dr. Newman argues that Sir Isaac’s alchemical investigations helped yield one of his fundamental breakthroughs in physics: his discovery that white light is a mixture of colored rays, and that a sunbeam prismatically fractured into the familiar rainbow suite called Roy G. Biv can with a lens be resolved to tidy white sunbeam once again. “I would go so far as to say that alchemy was crucial to Newton’s breakthroughs in optics,” said Dr. Newman. “He’s not just passing light through a prism — he’s resynthesizing it.” Consider this a case of “technology transfer,” said Dr. Newman, “from chemistry to physics.”

The conceptual underpinning to the era’s alchemical fixation was the idea of matter as hierarchical and particulate — that tiny, indivisible and semipermanent particles come together to form ever more complex and increasingly porous substances, a notion not so different from the reality revealed by 20th-century molecular biology and quantum physics.

With the right solvents and the perfect reactions, the researchers thought, it should be possible to reduce a substance to its core constituents — its corpuscles, as Newton called them — and then prompt the corpuscles to adopt new configurations and programs. Newton and his peers believed it was possible to prompt metals to grow, or “vegetate,” in a flask. After all, many chemical reactions were known to leave lovely dendritic residues in their wake. Dissolve a pinch of silver and mercury in a solution of nitric acid, drop in a lump of metal amalgam, and soon a spidery, glittering “Tree of Diana” will form on the glass. Or add iron to hydrochloric acid and boil the solution to dryness. Then prepare a powdery silicate mix of sand and potassium carbonate. Put the two together, and you will have a silica garden, in which the ruddy ferric chloride rises and bifurcates, rises and bifurcates, as though it were reaching toward sunlight and bursting into bloom.

Add to this the miners’ finds of tree- and rootlike veins of metals and alchemists understandably concluded that metals must be not only growing underground, but ripening. Hadn’t twined ores of silver and lead been found? Might not the lead be halfway to a mature state of silverdom? Surely there was a way to keep the disinterred metal root balls sprouting in the lab, coaxing their fruit to full succulent ripeness as the noblest of metals — lead into silver, copper to gold?

Well, no. If mineral veins sometimes resemble botanical illustrations, blame it on Earth’s molten nature and fluid mechanics: when seen from above, a branching river also looks like a tree.

Yet the alchemists had their triumphs, inventing brilliant new pigments, perfecting the old — red lead oxide, yellow arsenic sulfide, a little copper and vinegar and you’ve got bright green verdigris. Artists were advised, forget about mixing your own colors: you can get the best from an alchemist. The chemistry lab replaced the monastery garden as a source of new medicines. “If you go to the U.K. today and use the word ‘chemist,’ the assumption is that you’re talking about the pharmacist,” said Dr. Newman. “That tradition goes back to the 17th century.”

Alchemists also became expert at spotting cases of fraud. It was a renowned alchemist who proved that the “miraculous” properties of vitriol springs had nothing to do with true transmutation. Instead, the water’s vitriol, or copper sulfate, would cause iron atoms on the surface of a submerged iron rod to leach into the water, leaving pores that were quickly occupied by copper atoms from the spring.

“There were a lot of charlatans, especially in the noble courts of Europe,” said Dr. Newman. Should an alchemist be found guilty of attempting to deceive the king, the penalty was execution, and in high gilded style. The alchemist would be dressed in a tinsel suit and hanged from a gallows covered in gold-colored foil.

Newton proved himself equally intolerant of chicanery, when, in his waning years, he took a position as Master of the Mint. “In pursuing clippers and counterfeiters, he called on long-nurtured reserves of Puritan anger and righteousness,” writes James Gleick in his biography of Newton.

“He was brutal,” said Mark Ratner, a materials chemist at Northwestern University. “He sentenced people to death for trying to scrape the gold off of coins.” Newton may have been a Merlin, a Zeus, the finest scientist of all time. But make no mistake about it, said Dr. Ratner. “He was not a nice guy.”


Newton's alchemy
Posted by Mercury at 5:26 AM