Zebra spiders and fungus-killing bacterium to visit the ISS 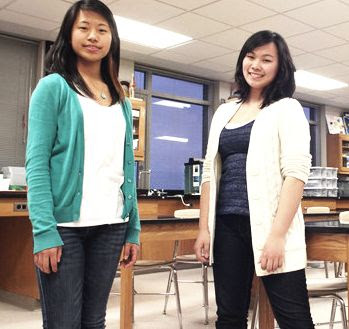 Dorothy Chen and Sara Ma"Space Lab Contest Picks Experiments Featuring Spiders and Bacteria"byKenneth ChangMarch 22nd, 2012The New York Times
A zebra spider spins no webs, but instead catches its prey by leaping onto it. But in space, a zebra spider would zip off in a straight line instead of a trajectory curved by gravity, missing its target.Amr Mohamed, an 18-year-old student from Alexandria, Egypt, wondered if the spider could learn and adjust.“If they can catch their prey in microgravity, it’s going to be evolutionary,” Mr. Mohamed said, “because it’s going to be the first time in history that an animal changes and adapts its hunting way to the zero-gravity environment.”Soon he, and the rest of the world, will find out.Mr. Mohamed’s idea is one of the two global winners of Space Lab, a competition run by YouTube, Google’s video site; Lenovo, the computer manufacturer; and Space Adventures, a space tourism company. Students ages 14 to 18 from around the world were invited to make videos pitching a science experiment to be conducted on the International Space Station.Two 16-year-olds from Troy, Mich., Dorothy Chen and Sara Ma, formed the other winning team, with an experiment that will look at whether a fungus-killing bacterium will become even more effective at killing fungus when it gets back from a trip that will make it temporarily weightless. Scientists already know that salmonella bacteria become more virulent in zero gravity, and the bacterium in their experiment, Bacillus subtilis, contains the same protein that caused that change in salmonella.“The idea, that having your experiment in the space station, is so surreal and so literally out of this world,” said Ms. Chen shortly after the winners were announced on Thursday.As for the zebra spiders, Mr. Mohamed does not think they will figure out how to catch fruit flies in space. These spiders do not spin webs, but they do attach a silk lifeline to themselves before leaping; this will allow them to reel themselves in and try again and again to aim themselves at fruit flies sharing their space station habitat.Both experiments are already being designed and constructed at BioServe Space Technologies, a research center run by the University of Colorado at Boulder, and are scheduled to fly to the space station on a cargo ship launched by the Japanese space agency. Sunita Williams, a NASA astronaut, is to perform the experiments, which will be broadcast online.For their grand prize, Ms. Chen and Ms. Ma will go to Japan for the launching of their experiment. Mr. Mohamed chose the other option: He will go to Star City in Russia for a week of the same training that Russian astronauts undergo.
Posted by Mercury at 3:08 PM