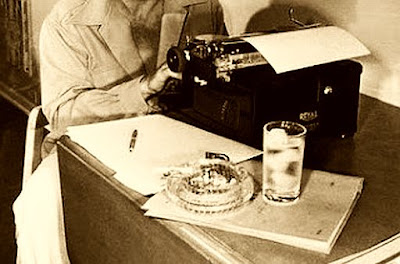 "How Getting Tipsy May Inspire Creativity"A new study finds that men who got moderately drunk on vodka cranberries did better on tests of inspired thinking.by Maia SzalavitzMarch 22nd, 2012Time
From Billie Holliday and Amy Winehouse to Coleridge and Kerouac, artists have long claimed alcohol and other drugs as muses for their creativity. But is there really a connection between intoxication and inspiration?Increasingly, science is confirming that altered states of consciousness — whether induced by drugs, alcohol, sleepiness, travel or anything else that removes us from our usual way of seeing the world — do indeed improve creative thought. The inhibition of what researchers call executive functioning, which includes focus and planning — abilities that decline when we’re under the influence — may be what lets us generate new ideas and innovative solutions, instead of remaining fixed on the task at hand.A recent study published in Consciousness and Cognition explored the effects of moderate drunkenness on people’s creativity, as measured by the commonly used “Remote Associates Test.” The word-association task involves identifying the one word that frequently occurs in tandem with three seemingly unrelated words. For example, the common word linking arm, tar and peach would be pit, which often follows each of the three trigger words.Researchers invited 40 young men who were social drinkers to participate. A control group of 40 men was also assembled, matched to the participants on scores of a test for working memory. Participants abstained from alcohol and other drugs for at least 24 hours before the experiment and avoided food and caffeine for four hours in advance.At the start of the study, the experimental group was given a meal of bagels — how much each man got depended on his body weight, in order to ensure that when the men drank later, they would reach equal levels of intoxication. Then, the participants were asked to watch the film Ratatouille, during which they were given vodka and cranberry drinks, again calibrated to their weight. After about an hour, they men had achieved an average blood alcohol content of 0.075 (just under the legal limit) and then they were given the word-association test.Compared with men who took the test sober after watching the same film, the drunk guys solved more questions and did so more quickly. They correctly solved 58% of the problems, compared with 42% for the sober group, and they came up with the right answers nearly four seconds faster on each question. Being drunk improved performance by about 30%.Moreover, the drunk men solved the problems much more intuitively than the sober ones did, reporting that the answers more frequently “came to them” in a flash, rather than through systematic thinking.The authors suggest that alcohol’s well-known effect in impairing executive function may be helpful for these types of creative problems: “Sometimes a reduced ability to control one’s attention can have positive implications for select cognitive tasks,” they write. They note also that previous studies have found that older people with reductions in attentional control are better at tests that examine creative thought, as are those with brain damage that interferes with attention.The findings raise the question of whether drugs that increase attention and focus — most notably, stimulants like Ritalin and amphetamines that are used to treat ADHD — would have the opposite effect on creative thinking. Very little research has been done on the issue, and what results exist so far have been mixed. One study of children with ADHD who took medication found that the drugs actually boosted their creativity — perhaps by allowing them enough focus to stick with the creative activities they had started. Another showed no effect, while yet a third did find that the drugs lowered performance on some creative tasks. The outcomes may well vary according to individual responses to the medications. For example, some research has found that while stimulants can improve test performance for those who are less intelligent, for the smartest folks, the medications can have the opposite effect.If less executive function is linked to more creativity, this may also help explain why artists, writers and musicians appear to be more vulnerable to addiction. Perhaps creative people are more likely than others to be attracted to drugs in the first place, as a possible source of inspiration. And then, if reduced executive function is responsible in part for their initial talent, this, too, could make them more susceptible to addiction once they start using. Having less executive control before you even take drugs means you’ll have less ability to stop once you start.That would increase addiction risk two ways — by increasing desire to use, and by increasing the risk from use that occurs. And of course, the more high-profile creative types who become addicted, the more it seems that drugs and alcohol must be crucial to creativity. And that itself would attract even more artists to initiate drug use, escalating the cycle.Whatever the real relationship between intoxication, addiction and art, the authors caution that their study findings don’t give people license to get plastered to “uncork the muse.” Co-author Jennifer Wiley, associate professor of psychology at the University of Illinois at Chicago, told the British Psychological Society’s Research Digest: “We tested what happens when people are tipsy — not when people drank to extreme. There could be no argument from these findings that drinking excessively would have the same effects.”A glass of wine or two, however, may occasionally help.
Posted by Mercury at 12:12 PM