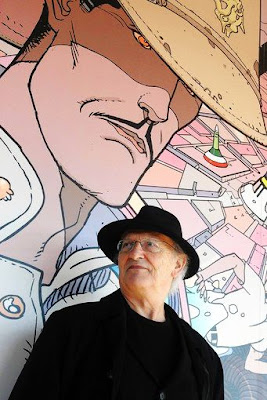 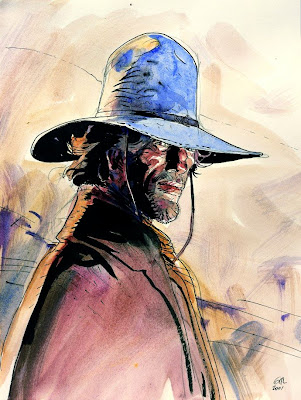 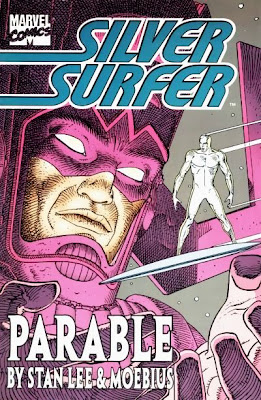 "Jean Giraud, or Moebius, dies at 73; master comics artist"Moebius' signature became shorthand for singular and strange visions in comics. The French artist also contributed to the look of films such as 'Alien' and 'Tron.'by Geoff BoucherMarch 11th, 2012Los Angeles Times
Jean Giraud, an enduring figure in European comics whose fantasy and sci-fi work — which he signed with his alias, Moebius — deeply influenced alien-world imagery throughout pop culture, has died. He was 73.Giraud died Friday night or Saturday morning after a battle with cancer, according to a statement from his publishing house, Dargaud, which went on to say the comics world had lost "one of its greatest masters."In his native France, where for decades comics have attracted an older readership, Giraud is considered his country's most important figure in cartooning. His signature creation is "Les Aventures de Blueberry," the Old West saga that debuted in 1963 and followed a peripatetic U.S. Cavalry lieutenant nicknamed Blueberry. The final edition was published in 2005.Former French Culture Minister Jack Lang told Reuters on Saturday that Giraud's legacy is a singular one. "Moebius has become a comic-book icon," Lang said. "In the '70s and '80s he was the figurehead of this unique art form in France."In America, however, he is best known for his interstellar visions, which reached these shores in the monthly R-rated pages of "Heavy Metal," the English-language version of "Métal Hurlant," a magazine Giraud helped launch in 1975. He made it a brand name with characters such as Arzach, the silent figure who glides above alien canyons astride a great, leathery bird, and the cosmically surreal story of "The Airtight Garage."The signature of Moebius became invested with a mystique and, like Federico Fellini in cinema, became shorthand for singular and strange visions in comics. The artist's famous fans included Fellini, George Lucas, James Cameron, Paulo Coelho, Stan Lee, Hayao Miyazaki and Ridley Scott.Scott brought in the artist to contribute to the look of the 1979 space-horror classic "Alien," and Steven Lisberger, the writer-director of "Tron," sought him out to pin down the digital dreams of that pioneering 1982 Disney movie."It's one thing to be talented and work hard enough to put your spirit and soul in your work, and it's a totally other thing to have a spirit and soul that is so beautiful and wise that it deserves to be put into art," Lisberger said Saturday. Giraud was "a very rare man, a true master, and his life's work is a masterpiece."Giraud would go on to contribute art or design work on such 1980s films as "Willow," "Masters of the Universe" and "The Abyss" and on 1997's "The Fifth Element."Still, he was a bit player in Hollywood and a superstar of the page and canvas. The subtle paradox that tugs at the eye of his audience is that everything portrayed — the landscapes, denizens, technologies and even physics — is totally alien but also completely unified in presentation and rendered with the confident precision of a surveyor who has walked every inch of a property.Another celebrated Moebius fan, Rick Carter, the production designer who won an Oscar for his art direction on the 2009 film "Avatar," said the effect is unsettling."The inspiration I always felt from the art of Moebius was that I believed he truly saw the imagery he depicted and was actually not making it up," Carter said Saturday. "His imagery appears as if it was sketched from a real-life subconscious world/existence."Even as Giraud's productivity narrowed in recent years, his stature in the creative community seemed to grow as young illustrators, digital artists and video game designers looked to his work as a key compass point. In October 2010 the Fondation Cartier Pour L'Art Contemporain in Paris launched a lavish five-month exhibit of Giraud's work that included small, humble sketches and majestic wall-sized pieces.The artist visited Los Angeles while the exhibit was underway and, in an interview with The Times, said he couldn't put a name to the restless nature of his imagination or the persistent disdain for repeating his past accomplishments."I have no explanation, but I am interested in being alive.… Art is the big door, but real life is a lot of small doors that you must pass through to create something new," he said."You don't always need to go far. If you are in the space station Mir and you need to fix something, you go outside, but not too far. If you travel too far you'll die. Outer space is not human, but you can visit. You need to be a little bit out there but you need to stay close to human."Jean Henri Gaston Giraud was born in May 1938 (the month before Superman arrived in a small rocket from another planet in the pages of "Action Comics" No. 1) in the Paris suburb of Nogent-sur-Marne.Although he had little formal training, his cowboy adventure tales were being published in Far West magazine by the time he was 18.In his early 20s he became an apprentice of the Belgian artist Jije, best known for his work on "Spirou et Fantasio" and the western adventure that clearly informed "Blueberry."The long journey from protege to titan left Giraud dizzy at times, and last year he said the adulation was a mystery in and of itself."They said that I changed their life," he told The Times. "'Your work is why I became an artist.' Oh, it makes me happy. But you know at same time I have an internal broom to clean it all up. It can be dangerous to believe it. Someone wrote, 'Moebius is a legendary artist.' A legend — now I am like a unicorn."The artist's survivors include Isabelle Giraud, his wife and business partner. Jean Giraud [Wikipedia]
Posted by Mercury at 2:16 PM