The super human brain and ethics 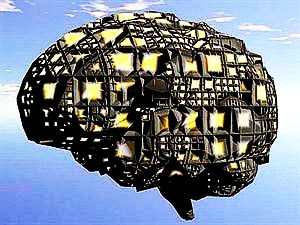 "Super-human brain technology sparks ethics debate"byKate KellandMarch 1st, 2012Reuters
A British ethics group has launched a debate on the ethical dilemmas posed by new technologies that tap into the brain and could bring super-human strength, highly enhanced concentration or thought-controlled weaponry.With the prospect of future conflicts between armies controlling weapons with their minds, the Nuffield Council on Bioethics launched a consultation on Thursday to consider the risks of blurring the lines between humans and machines."Intervening in the brain has always raised both hopes and fears in equal measure. Hopes of curing terrible diseases, and fears about the consequences of trying to enhance human capability beyond what is normally possible," said Thomas Baldwin, a professor of philosophy at Britain's York University who is leading the study."These challenge us to think carefully about fundamental questions to do with the brain: What makes us human? What makes us an individual? And how and why do we think and behave in the way we do?."The Council, an independent body which looks at ethical issues raised by new developments in biology and medicine, wants to focus on three main areas of neurotechnologies that change the brain: brain-computer interfaces (BCIs), neurostimulation techniques such as deep brain stimulation (DBS) or transcranial magnetic stimulation (TMS), and neural stem cell therapy.These technologies are already at various stages of development for use in the treatment of medical conditions including Parkinson's disease, depression and stroke, and experts think they could bring significant benefits, especially for patients with severe brain disease or damage.GROWING FASTBut they also have huge potential outside the health context. In military applications, BCIs are being used to develop weapons or vehicles controlled remotely by brain signals, and there is big commercial scope in the gaming industry with the development of computer games controlled by people's thoughts.Speaking at a briefing to launch the consultation, Baldwin said the estimated total global market for all neurotechnologies - including pharmaceuticals for the treatment of brain disorders - is around $150 billion."Setting pharmaceuticals aside, the value of the market for the devices and technologies we are dealing with is something in the region of $8 billion, and growing fast," he said.Kevin Warwick, a professor of Cybernetics at the University of Reading and a supporter of more neurotechnology research, said some experimental brain technologies had great potential in medicine."From the brain signals, a brain computer interface could translate a person's desire to move ... and then use those signals to operate a wheelchair or other piece of technology," he said. "For someone who has locked-in syndrome, for example, and cannot communicate, a BCI could be life-changing."But he and Baldwin also stressed there are concerns about safety of some experimental techniques that involve implants in the brain, and about the ethics of using such technology in other medicine and other fields."If brain-computer interfaces are used to control military aircraft or weapons from far away, who takes ultimate responsibility for the actions? Could this be blurring the line between man and machine?" Baldwin said.The ethics council's consultation is at www.nuffieldbioethics.org/neurotechnology . The deadline for responses is April 23 and it expects to publish a report with recommendations in 2013.
Posted by Mercury at 9:13 AM