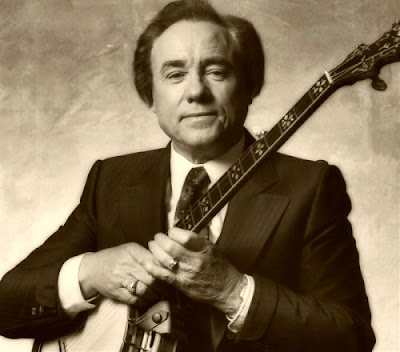 Earl ScruggsJanuary 6th, 1924 to March 28h, 2012"Earl Scruggs, Bluegrass Pioneer, Dies at 88"byChristopher Lehmann-HauptMarch 29th, 2012The New York Times
Earl Scruggs, the bluegrass banjo player whose hard-driving picking style influenced generations of players and helped shape the sound of 20th-century country music with his guitar-playing partner, Lester Flatt, died on Wednesday in a Nashville hospital. He was 88.His son Gary confirmed the death.Mr. Scruggs and Mr. Flatt probably reached their widest audiences with a pair of signature songs: “Foggy Mountain Breakdown,” which they recorded in 1949 with their group the Foggy Mountain Boys, and which was used as the getaway music in the 1967 film “Bonnie and Clyde”; and “The Ballad of Jed Clampett,” the theme song of the 1960s television sitcom “The Beverly Hillbillies.” (Mr. Scruggs and Mr. Flatt also appeared on the show at times.)But he also helped shape the “high, lonesome sound” of Bill Monroe, often called the father of bluegrass, and pioneered the modern banjo sound. His innovative use of three fingers rather than the claw-hammer style elevated the five-string banjo from a part of the rhythm section — or a comedian’s prop — to a lead or solo instrument. What became known as the syncopated Scruggs picking style helped popularize the banjo in almost every genre of music.Mr. Scruggs, who had played banjo since the age of 4, got his big break when he joined Monroe’s band, the Blue Grass Boys, in 1945. The band included Monroe, who sang and played the mandolin; Mr. Flatt on guitar; Howard Watts (a k a Cedric Rainwater) on bass; and Chubby Wise on fiddle.When Mr. Scruggs stepped up to play during an instrumental section, “listeners would physically come out of their seats in excitement,” Richard D. Smith wrote in “Can’t You Hear Me Callin’: The Life of Bill Monroe.”Mr. Scruggs stayed with the Blue Grass Boys for two years as they starred on the “Grand Ole Opry” radio show and recorded classics like “Blue Moon of Kentucky,” “Blue Grass Breakdown” and “Molly and Tenbrooks (The Race Horse Song)” for Columbia Records. He also sang baritone in the group’s gospel quartet.Early in 1948 he and Mr. Flatt, weary of the low pay and exhausting travel, decided to strike out on their own, despite Monroe’s pleas to stay. Angry and hurt, Monroe refused to speak to them for the next 20 years, a feud that became famous in country-music history.Although the two said they had not planned to get together after they quit, they ended up forming a band called the Foggy Mountain Boys, after the Carter Family song “Foggy Mountain Top.” Aided by the former Louise Certain, the group’s manager and booking agent and soon Mr. Scrugg’s wife, they surpassed Monroe in popularity, helped partly by the corporate sponsorship of Martha White mills. (That sponsor persuaded them to join the “Grand Ole Opry.”) In 1954 they appeared in a Broadway show, “Hayride.”In 1959 the group appeared at the first Newport Folk Festival, an offshoot of the Newport Jazz Festival, introducing the Scruggs style to the folk-music revival of those years. Soon young folk musicians were adopting his style, and the Foggy Mountain Boys began to play the college folk-festival circuit. Mr. Scruggs also began to work with his growing sons, Gary, Randy and Steve. And he recorded material by Bob Dylan and other folk-rockers.Mr. Flatt, by contrast, disliked the new music and felt it was alienating the band’s grass-roots fans. In 1969 the two broke up — they had also performed as Flatt & Scruggs — and Mr. Scruggs, with his sons, formed the Earl Scruggs Revue, a mostly acoustic group with drums and electric bass. It broadened his repertory to include rock, and the group played on bills with acts like Steppenwolf and the singer-songwriter James Taylor, sometimes before audiences of 40,000.The group stayed together for the remainder of Mr. Scruggs’s career, performing at Carnegie Hall and, in 1969, at the Moratorium to End the War in Vietnam in Washington. Mr. Flatt died in 1979.Earl Eugene Scruggs was born on Jan. 6, 1924, in Flint Hill, N.C. His father, George Elam Scruggs, a farmer and bookkeeper, played the banjo and fiddle (and died when Earl was 4); his mother, Lula Ruppe Scruggs, played the pump organ in church. Earl took up the banjo and also the guitar.Earl depended on a two-fingered picking style until he was about 10. Then one day he found himself picking a song called “Lonesome Ruben” (or “Ruben’s Train”) using three fingers instead of two — the thumb, index and middle finger. It was a style, indigenous to North Carolina, that he had been trying to master.He learned to emphasize melody by plucking it with his strong thumb in syncopation with harmonic notes picked with his first two fingers. The sound was like thumbtacks plinking rhythmically on a tin roof.As Earl’s mastery of the banjo grew, he began playing at dances and on radio shows with bands, among them Lost John Miller and His Allied Kentuckians. In December 1945, after the Miller group disbanded, Mr. Scruggs quit high school and joined the Blue Grass Boys for $50 a week. His career was on its way.In 1992 Mr. Scruggs was among 13 recipients of a National Medal of Arts, and in 2005 “Foggy Mountain Breakdown” was selected for the Library of Congress’s National Recording Registry.He continued to play into the 21st century. In 2001 he released a CD, “Earl Scruggs and Friends,” his first album in a decade and an extension of the Earl Scruggs Revue. In 12 songs, he collaborated with Elton John, Dwight Yoakam, Travis Tritt, Sting, Melissa Etheridge, Vince Gill, John Fogerty, Don Henley, Johnny Cash and the actor Steve Martin, a banjo player.Mr. Scruggs’s wife, Louise, died in 2006; his son Steve died in 1992. In addition to his sons Gary and Randy, survivors include five grandchildren and five great-grandchildren.At an 80th birthday party for Mr. Scruggs in 2004, the country singer Porter Wagoner said, “Earl was to the five-string banjo what Babe Ruth was to baseball.”“He is the best there ever was,” Mr. Wagoner said, “and the best there ever will be.” Earl Scruggs [Wikipedia]
Foggy Mountain BreakdownFlatt & Scruggs 1965