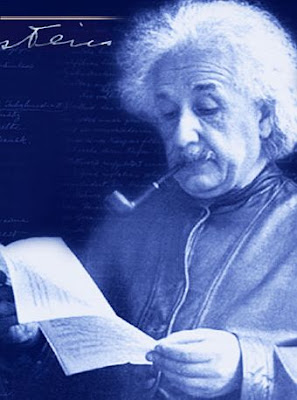 "Original Einstein manuscripts posted online"byDaniel EstrinMarch 19th, 2012Associated Press
Albert Einstein's complete archives — from personal correspondence with half a dozen lovers to notebooks scribbled with his groundbreaking scientific research — are going online for the first time.The Hebrew University of Jerusalem, which owns the German Jewish physicist's papers, is pulling never-before seen items from its climate-controlled safe, photographing them in high resolution and posting them on the Internet — offering the public a nuanced and fuller portrait of the man behind the scientific genius.Only 900 manuscript images, and an incomplete catalog listing just half of the archive's contents, had been posted online since 2003. Now, with a grant from the Polonsky Foundation UK, which previously helped digitize Isaac Newton's papers, all 80,000 items from the Einstein collection have been cataloged and enhanced with cross referencing technology.The updated web portal, unveiled Monday, features the full inventory of the Einstein archives, publicizing for the first time the entirety of what's inside the collection and giving scholars a chance to request access to items they previously never knew existed."Knowledge is not about hiding. It's about openness," said Menachem Ben Sasson, president of the Hebrew University.Einstein, a Nobel Prize-winning physicist whose theory of relativity revolutionized science, was one of the founders of the university. He contributed the original manuscript of his famed theory to the university when it was founded in 1925, four years after he was awarded the Nobel Prize in physics. He bequeathed the rest of his papers — and the rights to the use of his image — to the university upon his death in 1955.The portal now offers a close look at an initial 2,000 documents, or 7,000 pages total, from Einstein's personal and public life up to the year 1921. In the coming years, archivists will slowly upload the remainder of the collection.The online project is part of an initiative with Princeton University and the California Institute of Technology to publish annotated scholarly work on all of Einstein's papers.The Hebrew University's Einstein collection includes 14 notebooks filled with research notes in small cursive handwriting, letters to Einstein's contemporaries on his physics research, and a handwritten explanation of his theory of relativity and its summarizing equation E=MC2 (energy equals mass times the speed of light squared).It also includes lesser-known papers, including a postcard to his ailing mother, private correspondence with his lovers, and a pile of fan mail Einstein received about his wild hairdo."I saw your picture in the paper. I think you ought to have your haircut," one 6-year-old girl wrote in large block print.In another note, a researcher wrote: "I'm making a scientific survey to determine why genius so often tends to long hair."One document made public for the first time denies the commonly held view that Einstein's Jewish identity developed later in his career, as Hitler rose to power.In the aftermath of World War I, in which Germany was defeated by Allied powers, German Jewish scientist Fritz Bauer criticized Einstein's decision to go to the United States to raise funds for the Hebrew University. Bauer accused Einstein of being disloyal to Germany.In response, Einstein wrote: "Despite my declared international mentality, I do still always feel obliged to speak up for my persecuted and morally oppressed fellow clansmen, as far as it is within my powers … this involves an act of loyalty far more than one of disloyalty."The curator of the archives, Roni Grosz, said the letter makes Einstein's priorities clear. Eastern European Jewish refugees in Germany had been denied entry to universities after World War I, and Einstein saw it as an injustice."He couldn't fix it in Germany, so he worked hard to find another solution — for fine young Jews to study in a university in Jerusalem," Grosz said.The curator said the university would publish a copy of Einstein's grades as a young student, hoping it would dispel a popular myth that Einstein did poorly in school. The university is also posting a 20-year-old Einstein's correspondence with scientists, showing how advanced his research already was at that early age.Other parts of the collection expose the scientist's private life, especially a trove of letters to his half dozen lovers, and his interest in a host of social issues, from nuclear disarmament to African-American rights and the Arab-Jewish conflict.In a letter to an Arab newspaper before the establishment of the State of Israel, displayed to the public for the first time since its publication, Einstein outlined his proposal for Mideast peace: An eight-member "secret council" of Arab and Jewish physicians, judges, clergy and labor representatives which would negotiate a settlement to the conflict that divided them.The Hebrew University holds rights to Einstein's image, and prohibits advertisers from inappropriately using his likeness. In 2010, the university sued General Motors Co. for grafting the scientist's head onto the body of a well-toned, shirtless man in an ad in People magazine. The ad had the slogan "Ideas Are Sexy Too."Hanoch Gutfreund, former president of the Hebrew University and now responsible for Albert Einstein's intellectual property, said the collection's online exposure put Einstein's best face forward."More than anyone else, he expressed his views on every agenda of mankind," Gutfreund said. "Now we have a complete and full picture of that person."Archive
Posted by Mercury at 2:50 PM