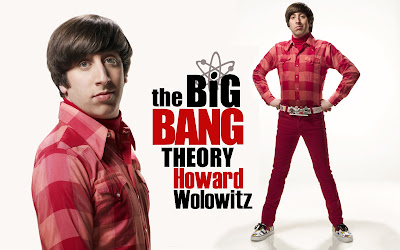 You know Howard Wolowitz? Of course you do...The Big Bang Theory. Howard lives at home with his over-bearing Jewish mother. Sheldon Cooper observes that Howard seems to have "an unresolved Oedipal complex". You decide.
"The Myth of the Mama’s Boy"We never worry about an involved father "masculinizing" his daughter. Why do such fears persist about a feminizing aspect of mothering?byKate Stone Lombardi March 16th, 2012

For generations, mothers have gotten the same old message when it comes to raising sons: beware of keeping him “too close.” A mom who nurtures a deep emotional bond will prevent him from growing up to be a strong, independent man. By refusing to cut those apron strings, she is on track to create the archetypal, effeminate, maladjusted “mama’s boy.” There’s one problem with this theory: it’s just not true.From the Oedipus myth (not to mention the complex Freud created around it) to the movie Psycho, our culture warns us about the dangers of mother-son closeness. No other parent-child combination is so stigmatized. We encourage mothers and daughters, as well as fathers and sons, to stay close throughout their adult lives. And a supportive father is considered essential to a daughter’s self-esteem. A dad can coach his daughter’s lacrosse team, wipe her tears and encourage her loftiest ambitions, all with smiling approval.But a mother who is similarly involved in her son’s life is often accused of coddling, meddling, smothering or acting inappropriately. While we don’t worry about an involved father “masculinizing” his daughter, there is clearly concern about the feminizing influence of Mom. As one woman said to me, “It’s like if I spend too much time with my son, he’ll start running around, begging for directions.” Mothers of sons are supposed to push their boys away, physically and emotionally, in the name of their developing manhood.This double standard is misguided and can be deeply damaging to boys. Certainly we know very young boys benefit from their mother’s love and comfort. A study published in Child Development involving almost 6,000 children found that baby boys who do not form strong attachments to their mothers grow up to be more aggressive and destructive children. And when young sons are encouraged to separate prematurely from their mothers, they become anxious little boys who carry a fear of intimacy and betrayal into their adult years, says Dr. Michael Kimmel, a sociologist who has written extensively about masculinity. After all, the first woman they have loved and depended on has pushed them away.As boys grow older, mothers who stay close to their sons can help combat the worst elements of a culture that cuts off boys’ natural sensitivity and rich emotional life. For years, headlines have proclaimed that boys are in “crisis.” They suffer from being forced to conform to standards of masculinity that still decree the only acceptable emotions are anger and aggression. Boys are also falling behind girls in school, getting lower grades, exhibiting more behavioral problems and receiving more diagnoses of learning disabilities.These are not unrelated problems, and moms can be part of the solution. Nurturing mothers can help their sons develop emotional intelligence, encouraging them to talk about their feelings and recognize those of others. Certainly boys who are better able to articulate their thoughts and who have stronger self-control will perform better in the classroom than boys who retreat into silence or act out. One study of 400 middle-school boys in New York City public schools revealed that boys who were closer to their mothers were less likely to define masculinity as a matter of being tough, stoic and self-reliant. These boys not only had less anxiety and depression than their more stoic peers but also were getting better grades.And contrary to stereotype, boys who can express a broader range of emotions will not become wimps, forever clinging to their mommies, but instead independent guys who will make strong, empathetic spouses and partners, says Dr. William Pollack, a psychology professor at Harvard University. What’s more, these young men will be better equipped to navigate today’s economy, in which communication skills and teamwork are more important for success than brute physical strength or dominance.Moms are tired of being told to back off from their sons for their own good. By keeping sons close, they aren’t creating mama’s boys. Moms are helping their sons reach their full human potential and setting up their boys for happier, more successful lives.
Posted by Mercury at 3:18 PM