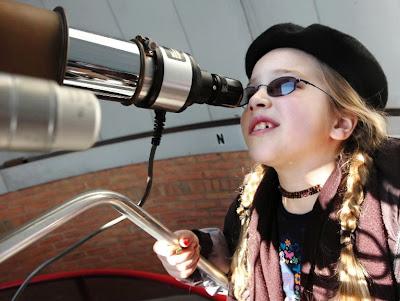 "Despite astronomer objections, digital billboards get Senate OK"byHoward FischerMarch 24th, 2012Capitol Media Services
Brushing aside concerns by astronomers, the state Senate voted Wednesday to legalize existing lighted digital billboards and potentially pave the way for more.The 20-8 tally came over objections from Sen. Olivia Cajero Bedford, D-Tucson, who said the billboards "undermine the $1.2 billion investment in Arizona' of companies and academic groups in their telescopes and research." She said that not only endangers more than 3,300 jobs but threatens the state with the loss of billions of dollars and future grants."If we pass this bill, it signals the world that Arizona is closed to astronomy," she said.But Sen. Sylvia Allen, R-Snowflake, said those concerns are misplaced.She pointed out that nothing in the legislation overrules existing local "dark sky" regulations like those which exist in Tucson and Flagstaff, or force any community to allow any new billboards at all of any type."Our observatories are protected right now," she said, detailing some of those local restrictions. "Those protections are not going to be removed."Cajero Bedford countered that local ordinances are insufficient."Telescopes collect light from great distances," she said. "The glow from Phoenix affects observatories in Tucson."Wednesday's vote gives the final word on HB 2757 to Gov. Jan Brewer. The measure already has been approved by the House.Press aide Matthew Benson would not comment on what his boss thinks of the plan, saying she will review it when it reaches her desk.In a prepared statement, Jeff Hall, director of the Lowell Observatory in Flagstaff, expressed cautious optimism that Brewer will refuse to approve the measure."We know she supports economic development and high-paying jobs in the state, which is exactly what astronomy has brought and continues to bring to Arizona," he said, "We hope she will help us continue to bring major new investors into the state by vetoing the bill."The legislation follows a ruling last year by the state Court of Appeals that billboards with changing messages are not authorized under state law to be located along roads funded at least in part with state and federal dollars. That made the 70 internally illuminated billboards which operate that way, mostly in Maricopa and Pinal counties illegal.Wendy Briggs, lobbyist for Clear Channel Communications, said the industry believes the judges got it wrong. She pointed out that her company and others followed all the proper procedures, including getting the necessary permits.Most immediately, the legislation would end the threat that these signs would have to come down or be converted to fixed messages. But the astronomy community instead sees the measure as an open-ended license for proliferation of this type of billboard.Cajero Bedford said the proposal comes at a particularly inopportune time, with the state trying to land the $130 million Cherenkov Telescope Array in Northern Arizona.She offered a compromise that would allow the 70 existing billboards to stay.New ones would be prohibited within 75 miles of an existing observatory or a site specifically proposed for a project. They would be allowed elsewhere, but only with limits on nighttime light levels that were set at the factory and could not be altered.That proposal was rejected by Sen. John McComish, R-Phoenix. He said a 75-mile dark sone is "basically putting into effect a statewide ban on all electronic signs.'Sen. Al Melvin, R-Tucson, said the industry-crafted legislation "may not be the most perfect bill.""But it does protect the industry of telescopes and observatories throughout the state," he said. Melvin said it is important to approve the law now and then, if necessary, revisit the issue next year.Allen said too much is being made of this particular technology. She said billboards amount to only between 2 and 5 percent of total light pollution."Yes, digital is different," Allen said. But she said operators are doing what they can to prevent extraneous light, even with an "eyebrow" over each bulb.Cajero Bedford countered that her colleagues were giving too much credibility to the arguments of the billboard industry."I would tend to believe the astronomers, the observatory people, as opposed to what the billboard companies are telling us about their lights," she said.
Posted by Mercury at 1:02 PM