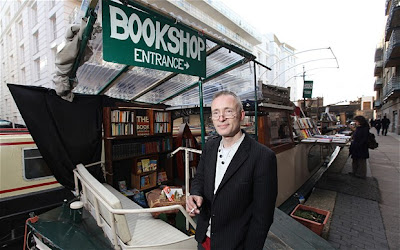 "A bookshop to float your boat"On board London’s only bookshop barge, Anoosh Chakelian discovers a vibrant alternative world of poetry, music and novel browsing. byAnoosh ChakelianMarch 6th, 2012The Telegraph
“It’s because it’s the canal. Put a few moorhens around and people start remembering that they’re human beings,” says Paddy Screech, the co-owner of Word on the Water, the London Book Barge.The capital’s only floating second-hand bookshop – which has been open for nine months, travelling between Camden Lock, Angel, Hackney and Paddington – stops for two weeks at each mooring to sell books donated by the public and by charity bookshops.It is owned by Paddy, “The Doctor”, and his co-partners, John Privett, “The Professor”, and a mysterious Frenchman called “The Captain”.The French Captain owns the boat, Paddy the Doctor keeps the business running at front of shop, including the necessary wood-chopping for the stove, and John the Professor, who runs a stall in Archway Market called Word on the Street, knows the book trade.Rolling a cigarette with what he calls his “boater’s hands”, Paddy explains why he began the business: “What we wanted was to have art and music and culture emitting from this boat all the time. In the summer when we’ve got acoustic musicians on the roof, it’s just lovely, and it even works in the rain!”
Posted by Mercury at 4:01 PM

Email ThisBlogThis!Share to TwitterShare to FacebookShare to Pinterest
Labels: bookstore