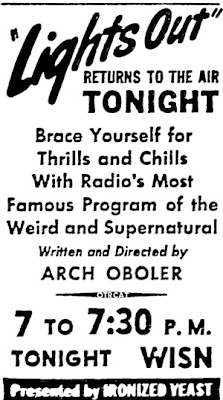 In the fall of 1933, NBC writer Wyllis Cooper conceived the idea of "a midnight mystery serial to catch the attention of the listeners at the witching hour." The idea was to offer listeners a dramatic program late at night, at a time when the competition was mostly airing music. At some point, the serial concept was dropped in favor of an anthology format emphasizing crime thrillers and the supernatural. The first series of shows [each 15 minutes long] ran on a local NBC station, WENR, at midnight Wednesdays, starting in January 1934. By April, the series proved successful enough to expand to a half hour. Lights Out [Wikipedia]
Lights Out"Oxychloride X"January 25th, 1938
Out of frustration from being rejected membership in a fraternity; a gifted laboratory student formulates a super antimatter corrosive substance that eats anything and eventually creating a hole on Earth.Audio presentation
Posted by Mercury at 8:43 AM