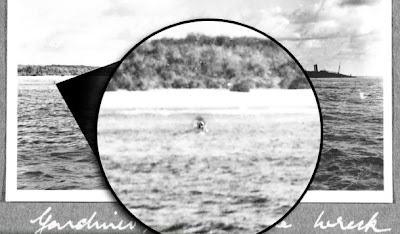 Based on the above photo.
"Renewed Amelia Earhart search sparked by photo clue"byBrian BurnesMarch 21st, 2012The Kansas City Star
This summer, 75 years after the aviator’s plane lost contact with the world, Amelia Earhart’s disappearance could be solved.Or not.What makes this summer’s expedition different from many other failed forays? A new look at an old photograph.And official ballast. Hillary Clinton is aboard, figuratively, this time. As is Robert Ballard, the explorer who located the wreck of the Titanic in 1985.On Tuesday, Secretary of State Clinton, Transportation Secretary Ray LaHood and other officials declared their support for the privately financed expedition to the Pacific Island atoll that some believe Earhart’s Lockheed Electra reached in July 1937.That the team is to be led by tireless Earhart sleuth Ric Gillespie leaves some less excited.“He has been over there 11 times and has brought back nothing but garbage,” added Bill Prymak of Broomfield, Colo., former president of the Amelia Earhart Society, who’s led his own Pacific expeditions.Earlier this week, an unnamed State Department official cautioned “a very healthy dose of skepticism must be in play.”But this round is motivated by new evidence: a photograph taken by a British survey team in October 1937.While the image was not unknown, a new enhanced analysis by State Department experts suggests it could show a landing wheel and strut of an Electra protruding from the water.“Fascinating and compelling,” said Gillespie at the State Department news conference.Supporting Gillespie’s evidence and methods, Ballard said, “Clearly the smoking gun was the analysis of that enhanced image.”He spoke of previously being intimidated by the challenge of learning the fate of the lost aviator. “If you ever want a case of finding a needle in a haystack, this is at the top of the list.”Still, the response in Atchison, Kan. — where Earhart was born was born in 1897 — was restrained.“I do not have faith that this will be any more revealing,” said Louise Foudray, longtime caretaker of the Amelia Earhart Birthplace Museum.“Mr. Gillespie has been over there so many times. We try to keep an open mind, but right at this point I do not have any faith that any more will come of this than anything else has done before.”Others were less diplomatic.“I am very negative about Gillespie; he is just trying to keep it alive because he is capitalizing on the mystery,” said Art Parchen of Overland Park, who long has studied Earhart’s disappearance.Gillespie, executive director of the International Group for Historic Aircraft Recovery of Delaware, acknowledged skepticism. He first visited Nikumaroro — formerly known as Gardner Island — in 1989.A second trip, in 1991, produced a heel for a size 9 shoe and a piece of aircraft aluminum. Presenting the relics at a 1992 press conference, Gillespie suggested the Earhart mystery had been “solved.”Not so fast. Two former Lockheed employees insisted the aluminum could not have come from Earhart’s aircraft. Further, a pair of Earhart shoes in Atchison — size 6 — cast doubt on the recovered heel.In 2010, a possible fragment of finger bone fragment caused a stir, but nothing useful was deduced from it.“I try to be positive about my acquaintances, but he is one guy who I think is off-base,” said Parchen.“He is making a career of chasing a ghost.”Earhart and navigator Fred Noonan disappeared while flying from New Guinea to Howland Island while trying to circle the globe in 1937. Many theories, many far-fetched, about the mystery have circulated.One held that Earhart and Noonan were taken prisoner and killed as spies by the Japanese.Another posited that she survived the war but was given a new identity on Long Island by the federal government.Sometimes reality is less fun, said Parchen.“I think the plane crashed, and she died,” said Parchen.That isn’t stopping Gillespie. On July 2, 75 years to the day after Earhart was last heard from, he will depart Honolulu on a University of Hawaii research vessel to search the waters off a flat reef on Nikumaroro.Robotic subs from Phoenix International, the U.S. Navy’s primary contractor for deep ocean search and recovery, will comb the area. All is to be followed by The Discovery Channel.Clinton said Tuesday that State Department staff members had worked for several years to “intensify our engagement with our friends in the Pacific Island nations.” She introduced Tessie Lambourne, foreign affairs and immigration secretary of the Republic of Kiribati, the boundaries of which include the uninhabited Nikumaroro.Clinton hailed Earhart as an inspiration to Depression-era Americans, who “gave people hope, and she inspired them to dream bigger and bolder.“Today, we meet at a time when the challenges are not so dire despite what you might hear on cable television or talk radio. But these are still difficult days for many Americans...“We can be as optimistic and even audacious as Amelia Earhart,” she said.Atchison holds an annual Amelia Earhart Festival and operates the birthplace museum with its owner, the Ninety-Nines, the International Order of Women Pilots.“If they do find something, of course, we will be very excited about it and want to know more about it,” Foudray said. “But it will probably be the same thing this time.”As Carole Sutton, museum board chairwoman from Chester, Neb., added, “I am not sure I want the mystery to end.”
Posted by Mercury at 1:27 PM