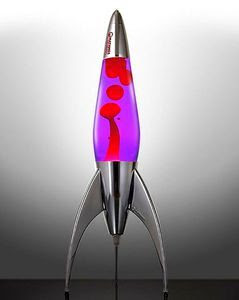 "The psychedelic physics behind the lava lamp’s hypnotic goo"byEsther Inglis-ArkellMarch 3rd, 2012io9
The lava lamp glooped its way into pop culture history with its ascending and descending blobs of wax. Although some lava lamp science is known, there are still a few mysteries that only its makers know for sure. Find out about the knowns and unknowns of the lava lamp.The lava lamp shows the difference between conceptual physics and practical engineering. The principles behind how it works are well known and obvious, but actually getting substances to do what it does is another matter. Although it seems like you should be able to make one yourself, it might well be worth the money (and the embarrassment) to just go out and buy one instead.The first basic principle is keeping the two liquids inside the lamp from mixing. This involves mismatching polarities. Water is a polar molecule, a molecule whose configuration of atoms means that most of the electrons move to one side and the protons stick out the other. It mixes well with other polar molecules. Oil, is non-polar, with even charge everywhere. As a result, the two separate themselves out. A similar separation is needed, of course, or the lava lamp will end up as one homogeneous blob.The psychedelic physics behind the lava lamp's hypnotic goo
But the separation itself is a problem. Oil beads on top of water for pretty much all the time. The two have very different specific gravities. A specific gravity is a measure of how much more or less dense a liquid is than water. Water's specific gravity is always 1.0. Oil separates out cleanly, and it does under all sorts of conditions. If oil and water were in the lava lamp, it would consist of two layers, cleanly separated. The colored wax (it is partly wax) that is in the lava lamp has a specific gravity so close to that of the clear liquid that when it warms, and its molecules jiggle themselves into a less dense configuration, its specific gravity drops below that of the other liquid and it rises up to the top. There it cools (and another engineering challenge is to make the lamp big enough and the heat mild enough that the wax can cool so short a distance above the heat source), and its specific gravity rises higher than that of the other liquid, dropping it back down.And then there's the heating coil at the bottom of the lamp. It's not just there to heat wax, or the lamp would have one central glob of wax rising and falling like an elevator. What keeps the wax together is the same thing that keeps beads of water together; surface tension. The molecules of wax tend to cling to each other more than they cling to anything else, so they'd naturally pull together. The heating coil at the bottom breaks the surface tension, pushing them apart and making ever-shifting patterns of wax roll over in the lamp.Overall, it's a really simple few principles giving rise to a fairly finicky apparatus. The exact chemicals inside the lava lamp are a trade secret, although the clear stuff seems to be precisely salinated water. The lamp also has to juggle the exact heat of the coil, temperature gradient through the water, and the dimensions of the lamp. Think of this, and may your mind be even more blown the next time you sit in the dark and stare at a lamp and listen to Dark Side of the Moon.Lava lamp [Wikipedia]
Posted by Mercury at 4:49 PM