God has left the building[s] 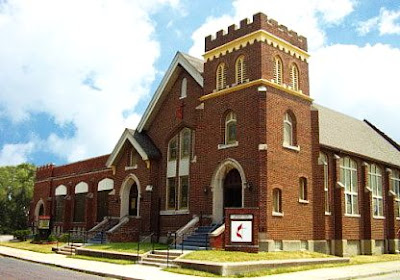 Nothing personal, just business.
"Banks foreclosing on churches in record numbers"by Tim ReidMarch 8th, 2012Reuters
Banks are foreclosing on America's churches in record numbers as lenders increasingly lose patience with religious facilities that have defaulted on their mortgages, according to new data.The surge in church foreclosures represents a new wave of distressed property seizures triggered by the 2008 financial crash, analysts say, with many banks no longer willing to grant struggling religious organizations forbearance.Since 2010, 270 churches have been sold after defaulting on their loans, with 90 percent of those sales coming after a lender-triggered foreclosure, according to the real estate information company CoStar Group.In 2011, 138 churches were sold by banks, an annual record, with no sign that these religious foreclosures are abating, according to CoStar. That compares to just 24 sales in 2008 and only a handful in the decade before.The church foreclosures have hit all denominations across America, black and white, but with small to medium size houses of worship the worst. Most of these institutions have ended up being purchased by other churches.The highest percentage have occurred in some of the states hardest hit by the home foreclosure crisis: California, Georgia, Florida and Michigan."Churches are among the final institutions to get foreclosed upon because banks have not wanted to look like they are being heavy handed with the churches," said Scott Rolfs, managing director of Religious and Education finance at the investment bank Ziegler.Church defaults differ from residential foreclosures. Most of the loans in question are not 30-year mortgages but rather commercial loans that typically mature after just five years when the full balance becomes due immediately.Its common practice for banks to refinance such loans when they come due. But banks have become increasingly reluctant to do that because of pressure from regulators to clean up their balance sheets, said Rolfs."A lot of these loans were given when the properties were evaluated at a certain level in 2005 or 2006," Rolfs said. "Banks have had to reappraise the value of these properties, whether it's a church or a commercial office building. Values have gone down, so the loans cannot continue in the same form."The factors leading to the boom in church foreclosures will sound familiar to many private homeowners evicted from their properties in recent years.During the property boom, many churches took out additional loans to refurbish or enlarge, often with major lenders or with the Evangelical Christian Credit Union, which was particularly aggressive in lending to religious institutions.Then after the financial crash, many churchgoers lost their jobs, donations plunged, and often, so did the value of the church building.CONGREGATIONS IN TROUBLESolid Rock Christian Church near Memphis, Tennessee, took out a $2.9 million loan with the Evangelical Christian Credit Union at the beginning of 2008, to construct a new, 2,000 seat, 34,000 square-foot building to house its growing congregation.In the middle of construction, the economy crashed. The church raided its savings to finish the project, but ended up defaulting on the loan.The ECCU foreclosed and put the church up for auction."We are still fighting this," a church spokesman told Reuters. "We have filed for bankruptcy to stop this foreclosure and to restructure our debt."At the iconic Charles Street African American Episcopal Church in Boston, Massachusetts, churchgoers and clergy accuse the bank of being unwilling to negotiate.The church is being threatened with foreclosure and a March 22 auction by its lender OneUnited bank, America's largest black-owned bank.The bank says the church, which was founded in 1818 and played a major role in the anti-slavery movement, has defaulted on a $1.1 million balloon loan that came due in December 2011.A balloon loan is a long-term loan, often a mortgage, that has a large, or balloon, payment due upon maturity. They often have very low interest payments and require little capital outlay during the life of the loan due to the large end payment.The church is also involved in separate litigation with OneUnited involving a 2006 loan of $3.6 million that financed the refurbishment of two buildings into a community center."We want to refinance and we want to pay. It's doable, we have the means to do it but we can only do it if they actually sit down and talk to us," said the Rev. Gregory G. Groover Snr, the church's pastor.Groover said the church did not default by missing monthly payments, but is in trouble because the loan ballooned."We don't have a million dollars to pay off the loan. I don't know what church does. The idea of auctioning off a church is senseless," he said.In a statement provided to Reuters, OneUntied said it was not its practice to discuss the details of "any discreet customer relationship"."It is not the practice of the Bank to exercise collection remedies including foreclosure in the absence of good cause. We trust the community will not rush to judgment without full knowledge of all the facts," it said.Axel Adams, an Atlanta, Georgia official with the Rainbow PUSH coalition, the civil rights and economic justice organization led by the Rev. Jesse Jackson, said he had seen a "tremendous increase" in churches facing foreclosure."And some pastors have not notified their congregants," Adams said. "They are fearful that if they do, they will lose congregants prematurely."Flat Rock Church in Lithonia, Georgia, which dates back to 1860, took out an $850,000 balloon loan with Sun Trust Bank in 2005 to fund a new 300-seat church.In May 2010 the loan became due. The bank foreclosed and the church is due to be auctioned off next month."The bank has refused to negotiate and to this day I just don't know why," said Binita Miles, the church pastor.A spokesman for Sun Trust said: "We view foreclosure as an action of last resort. We have been working for several years to address the issue with the client in hopes of avoiding foreclosure."There are more than 300,000 churches in the United States."The church foreclosure market isn't anything extraordinary," said Rolfs. "It's simply another byproduct of the credit bubble."
Posted by Mercury at 6:11 AM