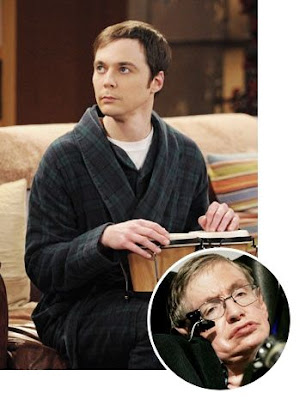 A milestone for the sex sitcom. May Cooper be reduced to ashes.
"'The Big Bang Theory' Enlists Stephen Hawking"He'll guest star on the April 5 episode for a meeting of the minds with Jim Parsons' Sheldon.by Lesley Goldberg March 12th, 2012The Hollywood Reporter
CBS' The Big Bang Theory can check off another guest star perfectly suited to the nerdy comedy.Theoretical physicist and cosmologist Stephen Hawking will guest star on the April 5 episode of the geeky comedy, the network announced Monday.The renowned brainiac has been a frequent target for the series about four lovable science nerds, with the Chuck Lorre/Bill Prady series first making a nod to the guys' Hawking hero worship in the pilot.Subsequent references have included Leonard (Johnny Galecki) impersonating a colleague's Hawking impersonation on the phone and, most notably, during Big Bang's fourth season, Jim Parsons' Sheldon is notoriously tricked into going to the airport in the middle of the night to meet him."When people would ask us who a 'dream guest star' for the show would be, we would always joke and say Stephen Hawking -- knowing that it was a long shot of astronomical proportions," Prady said in a statement announcing the news. "In fact, we’re not exactly sure how we got him. It’s the kind of mystery that could only be understood by, say, a Stephen Hawking."The Hawking casting comes mere weeks after the Thursday night series added dream guest star Leonard Nimoy -- another of Sheldon's famed heroes -- to its ranks for a unique guest gig in which the voice of Spock comes to Sheldon in his dreams.The series also featured astronaut Mike Massimino in a cameo as himself earlier this season.The Big Bang Theory airs Thursdays at 8 p.m. on CBS.
Posted by Mercury at 5:33 PM