Sixty videos to explain sixty symbols of physics and astronomy 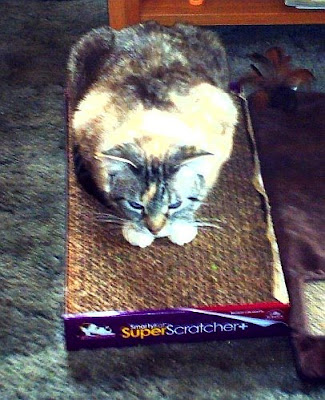 Nope...one of poet Tim's cats Princess [the other being Einstein].
From the University of Nottingham [England] are 60 videos [almost] explaining 60 astronomy and physics symbols.

Tilzy.tv
For many of us, it's been years since we sat in a science or math classroom and explored the material bases of our universe. And then, even if we were engaged by the material being studied, the seemingly esoteric language of symbols posed a daunting barrier to further progress. In other instances, poor instruction may have been behind a former student’s lost interest in mathematics or physical sciences.

Still, I think it's incredibly rare to find a person who isn't instantly fascinated by the wonders of nature when the universe is explained in terms they understand. I grew up watching Mr. Wizard, 3-2-1 Contact and Square One on PBS. Hell, the only DVDs I own besides The Big Lebowski are those in the box set for Carl Sagan’s Cosmos. But poor high school math teachers can do wonders for math confidence, giving birth to legions of writers every day.

Excuses aside, I probably could have made a decent physical scientist and to this day I ingest the latest science news available. And really, with organizations like Seed, TED and Scientific American making it easier and easier for laypeople to become acquainted with the latest in scientific thought, there is absolutely no reason to remain ignorant.

Add to that list the work of journalist Brady Haran, whose multiple projects serve as an invaluable series of video primers on a vast array of must-know science. As filmmaker-in-residence at University of Nottingham's "Science City", Haran has produced the chemistry-based Periodic Table of Videos and the "science behind-the-scenes" Test Tube. His latest project with Nottingham Science City is Sixty Symbols, a series of short video primers on all those symbols that comprise the formulae that even the most seasoned researchers forget.

A simple place to start is c, the symbols that represents the constant of the speed of light. Most of us recognize Einstein's foundation-shaking formula E=mc2 even if we're not sure exactly what it means or how to apply it.

There are no limits to the wonderment, small or large, that the universe provides. I'd bet that people would be less attracted to supernatural nonsense if only they were more attuned to the magnificence and majesty that the natural world holds. In the same manner people would also be less susceptible to pseudoscience, snake-oil and other hokum like creationism or astrology. Humans are curious, imaginative creatures and those faculties develop in the same manner as our muscles. Curiosity and imagination strengthen and expand with knowledge, but are apt to atrophy when they fall into disuse (or are fed with garbage).

Unlike the old episodes of Cosmos, the videos that Brady Haran has put together here are concise and tailored for modern consumption. Even the most ADD-addled mind can watch one of these 5-minute lessons. These are not stuffy, boring lectures and actually most of them are fairly humorous (these are primarily Brits, after all). The best way to teach science concepts is the same way you'd want to teach any other topic: make it fun, accessible and relatable to everyday experience.

For geeks (or dorks or nerds) like myself, sites like Sixty Symbols are a true gift. I'm going to spend the rest of the night watching the rest of the videos and then check back later when they post more. That's right, there are still quite a few in the making (newly updated ones are conveniently marked). Of course nobody's going to stop you from watching these 7 or 8 times and by then you could probably start teaching the material yourself. Hey, college is expensive, so why not let some of the best educate you for free?

I love Cosmos PRECISELY because it is not aimed at our modern short attention span society.

Sagan did not pander to the masses as much as most science shows do this time.

I too was a victim of bad math education.