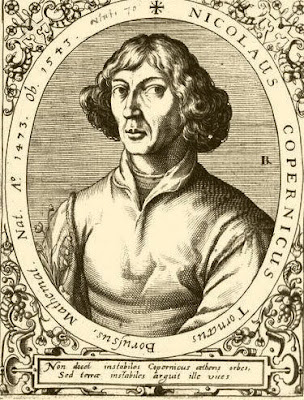 Not a "done deal" yet...merely a suggestion.

"Copernicus nominated for the select club of elemental scientists"

The discoverers of element 112, the newest addition to the periodic table, want it named after the 15th century astronomer who had the audacity to suggest the Earth orbits the sun

guardian.co.uk
The periodic table gained a new element last month. It's currently known as ununbium or simply element 112, but now the scientists who discovered it have proposed a name: copernicium. Sigurd Hofmann and his team at the Center for Heavy Ion Research (GSI) in Germany chose the name to honour 15th century scientist and astronomer Nicolaus Copernicus.

As the first man to realise that the Earth orbits the sun, Copernicus was vilified by the Catholic Church for removing mankind from the centre of creation. His discovery changed the way we looked at the stars and led to the realisation that the universe is a very, very big place. Star-gazers currently celebrating the International Year of Astronomy will agree that copernicium is a fitting legacy.

Don't update your chemistry posters just yet, though. The International Union of Pure and Applied Chemistry won't approve the new name for another six months to allow the scientific community time to discuss any objections to copernicium.

Some Guardian readers may be less than enthusiastic about the new name. When we appealed for suggestions last month, among the 148 comments on the blogpost not a single one of you mentioned Copernicus, although a few other scientist-honouring names were suggested, including my personal favourite, darwinum.

Elements named after scientists are common, as might be expected. If approved, copernicium will join bohrium (element 107) and meitnerium (element 109), for example, which were also discovered by scientists at the GSI and honour the physicists Niels Bohr and Lise Meitner. Albert Einstein, Alfred Nobel and Enrico Fermi can likewise boast elements of their own, namely einsteinium (99), nobelium (102) and fermium (100).

If copernicium doesn't do it for you, though, don't despair. Ununtrium, ununquadium, ununpentium, ununhexium, ununseptium and ununoctium all have (un)unofficial places in the periodic table, and once confirmed will offer plenty of scope for would-be elemental taxonomists.

Read that a couple of days ago. I am trying to understand this quest for an "Island of Stability". What is the significance of this quest? Is it a lot of theoretical sci-fi?