Robert Heinlein...would have been 102 today 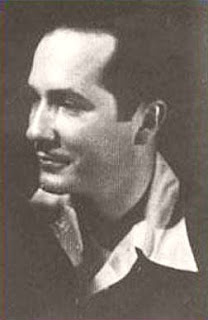 Robert Heinlein
July 7th, 1907 to May 8th, 1988
Robert Heinlein would have been 102 on this date. He was a major contributor to the realm of science fiction and can take an honored place among Isaac Asimov, Ray Bradbury, Philip K. Dick, Frederik Pohl and Theodore Sturgeon. I couldn't find any public domain material save four episodes of X Minus One [April 24th, 1955 to January 9th, 1958] at the bottom of the page.

"Happy Birthday, Robert A. Heinlein, Science Fiction Writer and Author of “Stranger in a Strange Land”"

Dulcinea Media, Inc.
Science fiction Grand Master Robert A. Heinlein inspired many readers with his predictions of technologies to come, his vivid descriptions of outer space, and his often controversial ideas about how we might react to what we find there.

Born on July 7, 1907, in Butler, Missouri, Robert Anson Heinlein took an early interest in science and astronomy. He enrolled in the Naval Academy in 1925, and served on both the Lexington and the USS Roper after graduation. Severe seasickness handicapped him aboard the Roper, and he eventually developed pulmonary tuberculosis. According to Wiliam H. Patterson Jr. of the Heinlein society, Heinlein was left "totally and permanently disabled" from his illness and retired from the Navy in 1934.

Heinlein had an affinity for physics and mathematics, and took classes in both from the University of California. According to The New York Times, Heinlein tried managing a silver mine in Colorado and also ran for public office in the California State Assembly in 1938.

In 1939, Heinlein sold his first science fiction story, "Life-Line," for $70. Taylor Dinerman of The Wall street Journal recorded that Heinlein had hoped to return to military service after Pearl Harbor was attacked, but instead, he worked at the Philadelphia Naval Aircraft Factory with fellow writers L. Sprague de Camp and Isaac Asimov. He wrote adventure stories for boys throughout the late 1940s and 1950s, and in 1958 wrote the controversial "Starship Troopers," which some critics said was too pro-military. Heinlien responded that the book drew attention to those in the military who are "rarely appreciated."

Robert Heinlein was the first writer to introduce science fiction to mainstream magazines like the Saturday Evening Post. One of his most famous novels is "Stranger in a Strange Land," for which Heinlein won a Hugo Award and which became the first science fiction novel to make The New York Times bestseller list. Heinlein received the first Grand Master Award for lifetime achievement from Science Fiction Writers of America in 1975.

The Rest of the Story

By the time Heinlein died on May 8, 1988, he had published more than 60 novels and a multitude of short stories. Years after his death, a key unpublished work was unearthed. Heinlein’s first novel had been rejected by two publishers, so he put the book away and eventually threw out the original manuscript. The novel was considered lost for more than 60 years, until a copy of the work "For Us, the Living" was uncovered in a Seattle garage. The value in this particular writing, according to The New York Times, is "the light it sheds on Heinlein's other books." Robert James, a Heinlein scholar, said Heinlein wasn't writing fiction at the very beginning of his career, but "he was writing what society should be about."

In memory of the author, the Robert A. Heinlein Memorial Award was created to honor those who have aided "the creation of a free, spacefaring civilization." People in numerous fields, such as science, philosophy, politics and writing, are eligible to receive this award. Past recipients include Gene Roddenberry, Dr. Buzz Aldrin and Capt. James Lovell.

July 2007 marked the centennial celebration of Robert Heinlein's birthday. During the events honoring Heinlein's life and work, NASA administrator Mike Griffin made a speech in which he said, "to be interested in science fiction was to be interested in the works of Robert Heinlein." Griffin also went on to credit Heinlein with encouraging the practice of critical thinking. "Anyone can ask why," Griffin said, "Those who make the future are the ones who ask, 'Why not?' Heinlein could make you ask that question."

A tycoon with a dangerous heart condition who'd always dreamed of setting foot on the Moon hires two ex-astronauts to fly him there illegally in a ship he has built in secret.

"The Green Hills of Earth"

Classic story of a space engineer who suffers a tragic accident and ends up tramping about the Solar System singing about the life of spacers and dreaming of returning to Earth once more before he dies.

"The Roads Must Roll"

In the future the country depends on an electro-hydraulic road system which acts as a conveyor belt to transport people and cargo. The system works well, until the engineer's union which maintains the roads stages a strike as a bid to gain power.

Humanity's descendants aboard a space Ark are divided into two factions-- the lower decks occupied by humans, and the upper by mutants. One man dares probe the upper levels and his quest leads him to question not only his society's prejudices, but the ultimate truth of what might lie beyond the Ship.

Robert A. Heinlein
Posted by Mercury at 1:55 PM