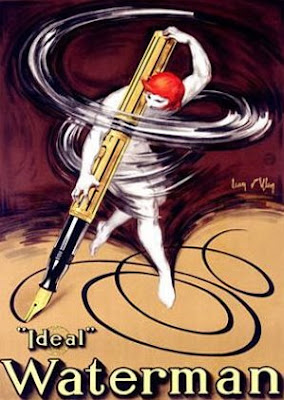 Breaking news in the description of the human psyche...by handwriting analysis?
Graphology (handwriting analysis), long in the same U.S. doghouse with such pseudosciences as astrology, palmistry, phrenology may not be so phony as scientists have thought it.

Emergence. Marseille studied psychology at Heidelberg and Berlin, got his Ph.D. in 1926 for a critical study of graphological theories, later practiced in Berlin and Vienna as consulting psychologist and personnel adviser for public-utility and industrial corporations. He left Austria on the eve of the Nazi invasion. In 1940 Paul Lazarsfeld, public-opinion researcher, retained him to make a handwriting analysis of mail received by several U.S. Senators during the debate on the conscription bill. His educational rating of the letter-writers (later checked by interviewers) attracted the attention of FORTUNE'S Elmo Roper, who is also a director of Spiegel's. At Roper's suggestion, Spiegel's gave Marseille a trial: 20 handwritten order blanks from reliable customers, 20 from known delinquents. Looking solely for indications of honesty or dishonesty, he failed dismally. Next, he was given 200 specimens—100 of them good accounts, 100 bad; and this time he looked, not for crooks, but for inconsistent, unreliable, poorly adjusted people. He spotted them correctly in over 70% of the cases. Spiegel's told him to go ahead.

Routine. Instead of quibbling over the significance of high-crossed t's and un-dotted i's, the Marseille system, basically, studies the consistency or inconsistency of style, the degree of integration revealed in an individual's handwriting; rates the subject accordingly as: 1) very good risk; 2) fairly reliable; 3) dishonest; 4) poor budgeter, probably harassed by bill collectors.

Graphology's most intractable foes, handwriting experts (not to be confused with analysts), who specialize in detecting forgeries, were quick to belittle Marseille's claims last week. More hopeful were the psychologists and personnel consultants who would like to see handwriting analysis established on scientific ground. If taken away from fortune-tellers and given serious study, graphology may yet become a useful handmaiden of psychology, possibly revealing important traits, attitudes, values of the "hidden" personality. Research for medical graphology (which studies handwriting for symptoms of nervous diseases) already indicates that handwriting is more than muscular. Most re-assuring observation: people who lose their upper extremities, then learn to write with mouth or toes, retain in their new mouth-or foot-writing the essential characteristics of their original handwriting.

Statistical analysis may be an indicator not a rule of human characteristic and typecasting is dangerous and misleading. And beyond analysis, the art or use of handwriting is fading...like "real" books? So don't worry about being labeled a serial killer.

"Mourning the Death of Handwriting"

Time
I can't remember how to write a capital Z in cursive. The rest of my letters are shaky and stiff, my words slanted in all directions. It's not for lack of trying. In grade school I was one of those insufferable girls who used pink pencils and dotted their i's with little circles. I experimented with different scripts, and for a brief period I even took the time to make two-story a's, with the fancy overhang used in most fonts (including this magazine's). But everything I wrote, I wrote in print. I am a member of Gen Y, the generation that shunned cursive. And now there is a group coming after me, a boom of tech-savvy children who don't remember life before the Internet and who text-message nearly as much as they talk. They have even less need for good penmanship. We are witnessing the death of handwriting.

People born after 1980 tend to have a distinctive style of handwriting: a little bit sloppy, a little bit childish and almost never in cursive. The knee-jerk explanation is that computers are responsible for our increasingly illegible scrawl, but Steve Graham, a special-education and literacy professor at Vanderbilt University, says that's not the case. The simple fact is that kids haven't learned to write neatly because no one has forced them to. "Writing is just not part of the national agenda anymore," he says....

Cursive started to lose its clout back in the 1920s, when educators theorized that because children learned to read by looking at books printed in manuscript rather than cursive, they should learn to write the same way. By World War II, manuscript, or print writing, was in standard use across the U.S. Today schoolchildren typically learn print in kindergarten, cursive in third grade. But they don't master either one. Over the decades, daily handwriting lessons have decreased from an average of 30 minutes to 15.

Zaner-Bloser, the nation's largest supplier of handwriting manuals, offers coursework through the eighth grade but admits that these days, schools rarely purchase materials beyond the third grade. The company, which is named for two men who ran a penmanship school back when most business documents were handwritten, occasionally modifies its alphabet according to cultural tastes and needs.

Handwriting has never been a static art. The Puritans simplified what they considered hedonistically elaborate letters. Nineteenth century America fell in love with loopy, rhythmic Spencerian script (think Coca-Cola: the soft-drink behemoth's logo is nothing more than a company bookkeeper's handiwork), but the early 20th century favored the stripped-down, practical style touted in 1894's Palmer Guide to Business Writing.

The most recent shift occurred in 1990, when Zaner-Bloser eliminated all superfluous adornments from the so-called Zanerian alphabet. "They were nice and pretty and cosmetic," says Kathleen Wright, the company's national product manager, "but that isn't the purpose of handwriting anymore. The purpose is to get a thought across as quickly as possible." One of the most radical overhauls was to Q, after the U.S. Postal Service complained that people's sloppy handwriting frequently caused its employees to misread the capital letter as the number 2.

I entered third grade in 1990, the year of the great alphabet change. My teacher, Linda Garcia at Central Elementary in Wilmette, Ill., says my class was one of the last to learn the loops and squiggles. "For a while I'd show my kids both ways," she says. "But the new alphabet is easier for them, so now I just use that one."

Garcia, who has been teaching for 32 years, says her children consider cursive a "rite of passage" and are just as excited to learn it as ever. But once they leave her classroom, it's a different story. She doesn't know any teachers in the upper grades who address the issue of handwriting, and she frequently sees her former students reverting to old habits. "They go back to sloppy letters and squished words," she says. "Handwriting is becoming a lost art."

Why? Technology is only part of the reason. A study published in the February issue of the Journal of Educational Psychology found that just 9% of American high school students use an in-class computer more than once a week. The cause of the decline in handwriting may lie not so much in computers as in standardized testing. The Federal Government's landmark 1983 report A Nation at Risk, on the dismal state of public education, ushered in a new era of standardized assessment that has intensified since the passage in 2002 of the No Child Left Behind Act. "In schools today, they're teaching to the tests," says Tamara Thornton, a University of Buffalo professor and the author of a history of American handwriting. "If something isn't on a test, it's viewed as a luxury." Garcia agrees. "It's getting harder and harder to balance what's on the test with the rest of what children need to know," she says. "Reading is on there, but handwriting isn't, so it's not as important." In other words, schools don't care how a child holds her pencil as long as she can read.

Is that such a bad thing? Except for physicians — whose illegible handwriting on charts and prescription pads causes thousands of deaths a year — penmanship has almost no bearing on job performance. And aside from the occasional grocery list or Post-it note, most adults write very little by hand. The Emily Post Institute recommends sending a handwritten thank-you but says it doesn't matter whether the note is in cursive or print, as long as it looks tidy. But with the declining emphasis in schools, neatness is becoming a rarity.

"I worry that cursive will go the way of Latin and that eventually we won't be able to read it," says Garcia. "What if 50 years from now, kids can't read the Declaration of Independence?"

I am not bothered by the fact that I will never have beautiful handwriting. My printing will always be fat and round and look as if it came from a 12-year-old. And let's be honest: the Declaration of Independence is already hard to read. We are living in the age of social networks and frenzied conversation, composing more e-mails, texting more messages and keeping in touch with more people than ever before. Maybe this is the trade-off. We've given up beauty for speed, artistry for efficiency. And yes, maybe we are a little bit lazy.

Cursive's demise is due in part to the kind of circular logic espoused by Alex McCarter, a 15-year-old in New York City. He has such bad handwriting that he is allowed to use a computer on standardized tests. The U.S. Department of Education estimates that only 0.3% of high school students receive this particular accommodation. McCarter's mother tried everything to help him improve his penmanship, including therapy, but the teenager likes his special status. "I kind of want to stay bad at it," he says. These days, that shouldn't be a problem.
Posted by Mercury at 5:43 AM