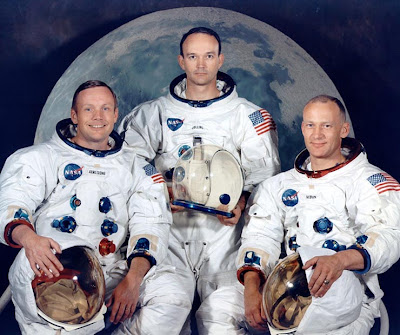 Associated Press
CAPE CANAVERAL, Fla.---- In the 40 years since Apollo 11, some of the key players, most notably Neil Armstrong, have steered clear of the increasingly bright glare of the moonlight cast by the historic lunar landing.

Almost all have written books detailing not only themselves but the glory days of space.

On this anniversary of his "one small step" on July 20, 1969, Armstrong, the commander, remains an enigma, steadfastly declining almost all interviews. He did not chronicle his own life, but agreed to a biography, "First Man," written by a historian and published in 2005.

Command module pilot Michael Collins, who circled the moon on while Armstrong and Buzz Aldrin explored its dusty surface, is just as elusive. He's not sure "recluse," though, is the right word.

"I think of the Brown Recluse, the deadliest of spiders, and I have a suntan, so perhaps," Collins wrote in a statement for NASA to get journalists and others off his case. "Anyway, it's true I've never enjoyed the spotlight, don't know why."

Aldrin, on the other hand, seems to be everywhere, plugging everything from radios to designer handbags, and signing copies of his new book.

He shuns the spotlight but when he does address crowds, he is a thoughtful speaker and exceedingly modest.

"I recognize that I'm portrayed as staying out of the public eye, but from my perspective it doesn't seem that way," Armstrong said in a 2001 interview for NASA's oral history project. "But I recognize that from another perspective, outside, I'm only able to accept less than 1 percent of all the requests that come in, so to them it seems like I'm not doing anything. But I can't change that."

He added: "Looking back, we were really very privileged to live in that thin slice of history where we changed how man looks at himself and what he might become and where he might go. So I'm very thankful that we got to see that and be part of it."

He will turn 79 on Aug. 5. He left NASA in 1971 and returned to Ohio, where he continues to live near Cincinnati. He taught engineering at the University of Cincinnati, then ventured into business.

Buzz Aldrin, the omnipresent lunar module pilot, has a new book out, "Magnificent Desolation." That was his description of the moonscape after he followed Armstrong down the ladder.

The book focuses on his post-lunar life, and his battle with depression and alcoholism.

He says it has been a challenge, since landing on the moon, to "carry on with the rest of your life." There is "this uneasiness and this uncertainty as to what I really ought to be doing."

Now 79, Aldrin lives in the Los Angeles area but is often on the road with wife Lois.

He still looks remarkably fit. In 2002, he punched, right in the face, a much bigger and younger man who was hounding him and trying to get him to swear on a Bible, on camera, that he walked on the moon. That's what he thinks of those who claim the Apollo moon landings were staged in a studio in the Nevada desert. His astronaut buddies still chuckle over it.

Aldrin, the only one on the crew with a doctorate, left NASA and returned to Air Force active duty in 1971. He's written several books, including space fiction, and is the apparent namesake of Buzz Lightyear of "Toy Story" fame.

Michael Collins, the command module pilot who circled the moon, has written several books about space, most notably 1974's "Carrying the Fire." It's considered one of the best insider space books ever, little surprise given Collins' eloquence and wit.

Like Armstrong, Collins, 78, avoided the anniversary limelight. He did, however, release a list of the questions he's frequently asked -- along with his answers -- to mark the occasion.

"Were you happy with the seat you had?" he continued. "Yes, absolutely. It was an honor."

He considers himself neither a hero nor a celebrity, and more than a little grumpy as he ages.

"Heroes abound and should be revered as such, but don't count astronauts among them," he wrote. "We work very hard; we did our jobs to near perfection, but that was what we had hired on to do."

Luck played a big part in his life, Collins noted.

"Usually, you find yourself either too young or too old to do what you really want, but consider: Neil Armstrong was born in 1930, Buzz Aldrin 1930, and Mike Collins 1930. We came along at exactly the right time. We survived hazardous careers and were successful in them. But in my own case at least, it was 10 percent shrewd planning and 90 percent blind luck. Put LUCKY on my tombstone."

As for "any keen insights?" His response: "Oh yeah, a whole bunch, but I'm saving them for the 50th."

Collins left NASA in 1970 and became the first director of the Smithsonian Institution's National Air and Space Museum in Washington. He now splits his time between Boston and Florida's Gulf Coast.
Posted by Mercury at 5:36 AM

i have thought about this for a while and have come to the conclusion.....we should have sent machines