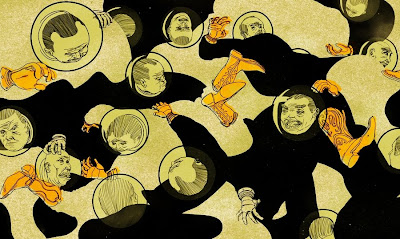 I expected nothing less from "space cowboys".

Reuters
CAPE CANAVERAL, Florida--The U.S. investment in the Apollo space program, which landed men on the moon, paid off handsomely, unlike the $100 billion plowed into the International Space Station, Apollo's pioneering astronauts said on Monday.

"We opened the door to future of exploration by touching down on another body," Apollo 11 astronaut Buzz Aldrin, the second man to set foot on the moon, said at a press conference commemorating the 40th anniversary of the first moon landing.

The United States staged six successful missions to the moon between 1969 and 1972, then developed the space shuttles and later, the space station.

NASA is finishing construction of the station, a $100 billion project of 16 nations, and plans to retire the shuttle fleet next year. After that, the United States plans to pay Russia to ferry crews to the outpost, which orbits 225 miles above Earth.

"We've spent a lot of money up there for almost nothing. It's almost a white elephant," Apollo 13 commander Jim Lovell said. "Until we can really get a return on our investment on that particular project, then it was money wasted."

The United States spent about $25 billion, in 1969 dollars, on the Apollo project. The investment, which consumed about 4 percent of the federal budget, was returned many times over, the astronauts said.

"We now seem to think it's too much to put 0.6 percent into the NASA budget," said Apollo 7 astronaut Walter Cunningham. "That is idiotic in my opinion."

"The investment that we made back in the 1960s was paid back. You got the return on the investment for the next 30 years. It was a driver of technology that really helped make us the leading, driving economic force of the world," he said.

"What are we doing today, what investment are we making today that will ensure that we have that kind of return for the next 30 years? I don't see it out there," he added.

What's lacking, the astronauts say, is an inspiring goal, a motivating force, such as what the objective of landing on the moon did for the Apollo initiative.

"To me, exploration is going someplace that you haven't been before," said Aldrin, who would like to see NASA move on to Mars, rather than leading a return to the moon.

The current plan, developed in the wake of the 2003 Columbia accident, is for NASA to complete the space station, return astronauts to the moon and eventually move on to Mars and other destinations in the solar system.

President Barack Obama, who met with the astronauts at the White House on Monday, said NASA would continue with its "inspirational" mission.

"It's fair to say that the touchstone for excellence in exploration and discovery is always going to be represented by the men of Apollo 11," he said in the Oval Office. "You inspired an entire generation of scientists and engineers that ended up really sparking the innovation, the drive, the entrepreneurship, the creativity back here on Earth."

"The only way to have people glued to their TV sets is to have an accident ... or do something that is really different," Lovell said.

On Monday a pair of spacewalking astronauts spent the day stashing a spare cooling system pump, antenna and other gear outside the station. The equipment is needed to keep the outpost operational after the shuttle fleet is retired.

"I want to see the space station have a return on our investment. I think it can," Lovell said. "We've done a lot more with the Hubble Space Telescope, which I think has been one of the greatest triumphs of the space program."
Posted by Mercury at 5:54 AM