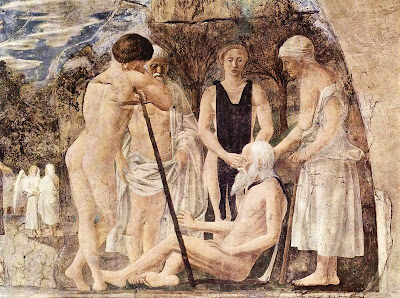 Methuselah
Juan Ponce de León's dream in medications? I guess this quest will never go away. The ethics still remain though.

"Longevity pill on the horizon?"

University of Washington
UW scientists Dr. Matt Kaeberlein, assistant professor of pathology, and Dr. Brian Kennedy, associate professor of biochemistry, study factors that control aging. They were asked by Nature to write a commentary on a paper published in the July 9 issue showing that dietary supplementation with rapamycin increases the life span of mice. They observed that, until recently, compounds that slow the hands of time were in the realm of science fiction, but with this finding may be closer to reality.

"The possibility that such compounds might exist, and might perhaps even be within reach," they wrote, "has gained scientific credibility."

Their News & Views editorial, "Ageing: A Mid-Life Longevity Drug?" noted that the study, co-led by Dr. David Harrison at the Jackson Laboratories in Maine, Dr. Richard Miller at the University of Michigan, and Dr. Randy Strong at the University of Texas Health Sciences Center at San Antonio, used a specially formulated, time-release rapamycin supplement in their laboratory mouse chow. Interestingly, the mice were not exposed to rapamycin in the diet until they were middle-aged, or, as the study reported, "roughly the equivalent of a 60-year-old person." Even so, the drug had a profound effect on lifespan.

Rapamycin was originally discovered in soil samples on Easter Island (Rapa Nui), famous for its towering, long-faced, stone Moai statues. Rapamycin already has a clinical role in reducing rejection of transplanted organs, in treating advanced kidney cancer, and in preventing narrowing of the heart's arteries after corrective surgery.

The study of rapamycin's longevity effects was part of the National Institute on Aging Interventions Testing Program. It accepts nominations for compounds from members of the scientific community, and selects the most promising to undergo parallel testing at three different institutions. Several compounds have been tested, but rapamycin is the first to significantly increase lifespan at all three centers in both male and female mice.

Rapamycin, which Kaeberlein, Kennedy and Dr. Stanley Fields, professor of genome sciences, had previously shown increases life span in yeast, is know to inhibit an enzyme called TOR. TOR activity is regulated by nutrient availability. Prior work by these UW scientists indicated that reducing TOR activity is central to how dietary restriction slows aging in yeast. Dietary restriction has long been known to slow aging in mice and to protect animals against age-related disorders like cancer, obesity, and heart disease. In the commentary, the authors suggest that the possibility that rapamycin is mimicking the effects of dietary restriction in mice merits further study.

The commentators also warn that healthy people shouldn't take rapamycin to slow aging because it can suppress the immune system. However, they don't rule out the possibility that rapamycin -- or more sophisticated interventions to reduce TOR activity -- might someday prove useful against age-related diseases. They also speculate that drug strategies might be discovered in the relatively near future to provide similar disease-fighting and longevity benefits without unwanted side effects.

The authors concluded: "Although extending human lifespan with a pill remains the purview of science fiction for now, the results of the study by Harrison and his colleagues provide reason for optimism that, even during middle age, there's still time to change the road you're on."