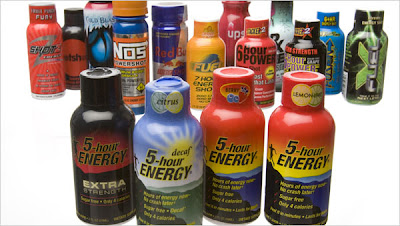 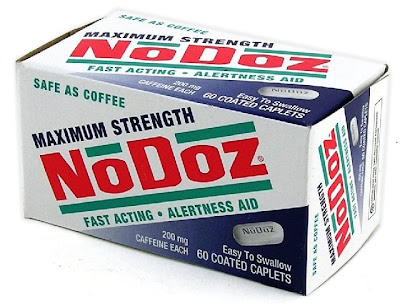 This is nothing new. Back in my day it was NoDoz and similar products in tablet form. They did work but in the end--we all crashed. Natural sleep usually won out. I am sure some will indulge for, shall we say recreational purposes, for caffeine is on the low end of the speed spectrum. But what bothers me is the fact that the doses are quite expensive and habitual use may cause physical and psychological issues. College kids--OK; truck drivers and construction workers--maybe not OK. I'll stick with my four cup coffee maker and Folger's Brazilian blend.

The New York Times
COLLEGE PARK, Md. — The power drink of the moment costs 20 times as much per ounce as Coca-Cola, comes in a tiny bottle and tastes so bad that most people hold their noses and down it in a single gulp.

Despite all that, sales of "energy shots" are soaring in the middle of a recession. The two-ounce drinks, which give people a concentrated dose of caffeine, B vitamins and amino acids, were all but unheard-of four years ago. Today they are the hottest drink category in the country, with sales expected to almost double this year from last, to about $700 million.

The shots are meant for people who want a jolt of caffeine without having to drink a big cup of coffee or one of the 16-ounce energy drinks that have become ubiquitous. They go down fast, more like medicine than a beverage. That is part of the appeal to their most devoted consumers: students cramming for exams or partying into the night, construction workers looking for a lift and drivers trying to stay awake.

Near the University of Maryland the other day, students thought nothing of paying $3 or more for a shot. That is $1.50 an ounce; at that price, a 20-ounce bottle of Coca-Cola would sell for $30.

"It helps me stay up all night when I have work to do," said Matt Sporre, 20, a sophomore chemical engineering major who said he drank shots three or four nights a week when school was in session. "Those things are going to be the death of my generation," he added. "Too much caffeine."

Mr. Sporre and several others students said the shots worked well in combination with Adderall, a prescription drug for attention deficit disorder that is popular on college campuses. The Adderall helps them focus, they said, and the shot keeps them awake.

Several students said they sometimes downed an energy shot before going out drinking. Others said the shots helped them stay awake during long drives home from school. Two members of the university’s wrestling team said some of their teammates drank the shots before matches to get an energy lift.

A 7-Eleven store on Knox Road, just off the Maryland campus in College Park, has become one of the top sellers of energy shots among the 5,700 United States stores in the 7-Eleven chain. The store's owner, Million Mekonen, said that sales spiked during finals in May, when the store sold close to 400 shots in a week.

But students are not the only users. Steve Cisko, 26, a construction worker renovating a dormitory, stopped in at the 7-Eleven and bought a shot made by AriZona Beverage for $3.99.

"I do demolition; it wears you out," he said. "Sometimes I'll take two at a time in the afternoon. Every guy I work with uses them."

Sales of the shots are rising even as sales of traditional energy drinks like Red Bull have flattened out. Bill Pecoriello, chief executive of Consumer Edge Research, estimated that shot sales could reach $700 million this year, nearly double last year's $370 million, not counting sales by Wal-Mart Stores. The estimate was based on sales data collected by Information Resources, a market research firm.

The market is dominated by a tiny company in suburban Detroit called Living Essentials, which began test sales in late 2004 of a product called 5-Hour Energy, packaged in small plastic bottles. Today, 5-Hour Energy accounts for about 80 percent of the rapidly expanding market, according to Mr. Pecoriello.

The company's unlikely success — it has only one other product, an antihangover pill called Chaser — has forced the big beverage makers to play catch-up. Last month, Red Bull introduced a two-ounce shot, and Dr Pepper Snapple began test-marketing a three-ounce version of its Venom energy drink, called Venom Bite. Coca-Cola introduced a shot last year based on its NOS energy drink.

Living Essentials has spent heavily on advertising to build the market and hold its position against newcomers. It expects to spend $60 million this year on television advertising for 5-Hour Energy. It has also gone after several of its competitors in court, challenging labels or product names it said were too close to its own.

The most vigorous legal battle pits Living Essentials against a Texas company called Custom Nutrition Laboratories and includes accusations of betrayal, stolen secrets and other skullduggery.

Now both companies claim ownership of the product’s secret recipe, although only Living Essentials continues to produce it. Last month a federal magistrate judge ordered the two sides to try to mediate their dispute.

"We invented the product," said Baxter W. Banowsky, a lawyer in Dallas for Custom Nutrition. "Whatever profits they've made from the sale of the product encompassing our formula, they should be turned over to us."

Carl F. Sperber, a spokesman for Living Essentials, said the company would not comment on the litigation, which involves cases in state and federal courts in Texas.

Unlike older energy drinks, 5-Hour Energy and most other shots do not contain sugar. Their crucial ingredient is caffeine. But Living Essentials and many of its competitors will not reveal exactly how much of it is in the products, saying only that it is about as much caffeine as in a cup of coffee. The caffeine in coffee can vary widely, from about 80 to 175 milligrams in an eight-ounce cup.

Living Essentials makes broad claims for 5-Hour Energy, saying that it is "packed with B vitamins for energy and amino acids for alertness and focus."

Nutritionists were skeptical of such claims, however.

Marion Nestle, a nutrition professor at New York University, said that while some of the nutrients in 5-Hour Energy were known to play a role in the body's metabolism, most people got enough of those nutrients in their regular diet and that ingesting elevated amounts had not been shown to have any beneficial effect.

"It sounds like a great placebo to me," she said. "You can gulp this down and you feel like you're doing something. And I’ll bet you ask people and they say they feel better. It's got caffeine — why not?"

One thing is certain: people are not buying the shots for the taste.

Joe Gere, a New Jersey entrepreneur who produces a shot called Xfuel, said there was not enough water in a two-ounce shot to dilute the bitter taste of the caffeine and nutrients. But shot makers concede that a medicinal flavor and the small, pill-bottle size are all part of a shot's appeal.

"Five-Hour Energy's not supposed to taste fantastic," said Mr. Sperber, the Living Essentials spokesman. "This is supposed to be a functional product, not something for flavor or something for refreshment."
Posted by Mercury at 4:18 AM

i use them all the time....old addict trick....find something that works well with your drugs...lol...in fact have a new to try tomorrow.....mine is Pepsi Max....cheap and loaded with caffeine

Kind of like the cough syrup when we were kids? I'LL PASS.