Death of an "atom smasher" 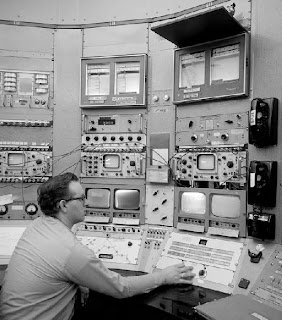 Wired Science
BERKELEY, California — What was once the world's biggest atom smasher will soon be nothing more than a collection of old photos and the dust beneath the next big science machine.

Lawrence Berkeley National Laboratory’s Bevatron, built by the Atomic Energy Commission for $9 million in the early '50s, is slowly being demolished in the hills overlooking San Francisco Bay. In a few years, all traces of it will be gone.

The Bevatron was a marvel, that, when compared to the rest of the human world drew ridiculous comparisons. Popular Science called it a "10,000-Ton Cracker for Invisible Nuts" and rapturously listed its dimensions. For boys of all ages, the Bevatron's stats were the 36-24-36 of physics.

The Bevatron occupied 125,000 square feet of land at the center of Lawrence Berkeley National Laboratory. It was once the crown jewel of the lab, of the National Lab system and of the particle physics world.

Read the rest of the article and view the many photographs


Columbia's cyclotron--gone
Posted by Mercury at 7:03 AM