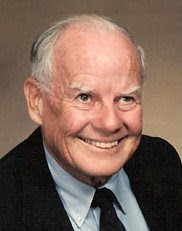 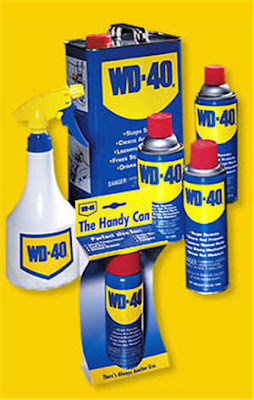 One can rank WD-40 next to Silly Putty when it comes to marketing a product. Silly Putty was an accident but WD-40 was a scientific intent. And I am sure we all have used this product. Can you imagine if Billy Mays had the selling rights? For me WD-40 was great in protecting my tools from rusting but then so was an oil rag and it nearly ruined my old Royal upright typewriter...made the keys stick.

The New York Times
John S. Barry, an executive who masterminded the spread of WD-40, the petroleum-based lubricant and protectant created for the space program, into millions of American households, died on July 3 in the La Jolla neighborhood of San Diego. He was 84.

The cause was pulmonary fibrosis, a lung disease, said Garry Ridge, president and chief executive of the WD-40 Company.

The company says surveys show that WD-40, the slippery stuff in the blue and yellow aerosol can, can be found in as many as 80 percent of American homes and that it has at least 2,000 uses, most discovered by users themselves. These include silencing squeaky hinges, removing road tar from automobiles and protecting tools from rust.

Mr. Barry was not part of the Rocket Chemical Company in 1953, when its staff of three set out to develop a line of rust-prevention solvents and degreasers for the aerospace industry in a small lab in San Diego. It took them 40 attempts to work out the water displacement formula. The name WD-40 stands for "water displacement, formulation successful in 40th attempt."

Convair, a unit of General Dynamics, first used WD-40 to protect the outer skin of the Atlas missile from rust and corrosion. The product worked so well that employees sneaked WD-40 cans out of the plant to use at home. Norm Larsen, the Rocket Chemical technician who invented WD-40, soon came up with the idea of selling it to the general public.

WD-40 hit store shelves in San Diego in 1958. In 1961, employees came in on a Saturday to produce the first truckload shipment to meet disaster needs of victims of Hurricane Carla on the Gulf Coast. WD-40 was used to recondition flood-damaged vehicles.

Sales continued to increase, but it was the arrival of Mr. Barry as president and chief executive in 1969 that jolted the company to dominance in its unusual niche market. He immediately changed the name of Rocket Chemical to the WD-40 Company, on the indisputable theory that it did not make rockets.

Mr. Barry was fiercely dedicated to protecting the secret formula of WD-40, not to mention its trademarks and distinctive container. The company never patented WD-40, in order to avoid having to disclose the ingredients publicly. Its name became synonymous with the product, like Kleenex.

Mr. Barry acknowledged in interviews with Forbes magazine in 1980 and 1988 that other companies, including giants like 3M and DuPont, made products that closely resembled WD-40.

Mr. Barry brought marketing coherence and discipline to the company. He spruced up the packaging and increased the advertising budget, but most of all he pushed for distribution. He emphasized free samples, including the 10,000 the company sent every month to soldiers in the Vietnam War to keep their weapons dry.

He kept tight control of the product. When Sears wanted to package WD-40 under its own label, Mr. Barry said no. When another big chain wanted the sort of price concessions to which it was accustomed, he refused.

He pushed to get WD-40 into supermarkets, where people buy on impulse. He also began an aggressive effort to sell WD-40 in foreign countries.

"We may appear to be a manufacturing company," Mr. Barry said to Forbes, "but in fact we are a marketing company."

John Steven Barry was born in Minneapolis on Aug. 31, 1924. He earned a degree in mechanical engineering from the University of Minnesota, then enlisted the United States Navy in a program for officer candidates, under which he studied at Harvard and Columbia.

He then earned a master's degree in business from the Massachusetts Institute of Technology and went to work for 3M. He was soon recalled by the Navy to serve in the Korean War.

He returned to 3M and worked for it and other companies until he succeeded his father-in-law, Cy Irving, as president of what would soon become the WD-40 Company. After resigning the company presidency, Mr. Barry stayed on as chairman until 2000.

Mr. Barry is survived by his wife of 56 years, the former Marian Irving; his sons, Randy and Steve; his daughter, Deborah Faneros; and four grandchildren.

People's enthusiasm for sending in ideas for using WD-40 mushroomed under Mr. Barry. The uses included preventing squirrels from climbing into a birdhouse; lubricating tuba valves; cleaning ostrich eggs for craft purposes; and freeing a tongue stuck to cold metal.

A bus driver in Asia used WD-40 to remove a python that had coiled itself around the undercarriage of his bus.
Posted by Mercury at 5:04 AM