Endeavour is struck by debris 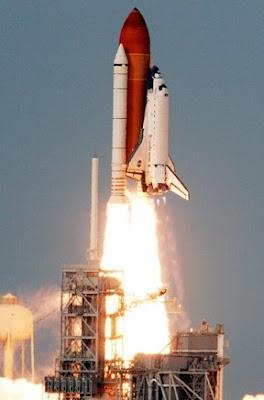 July 15th, 2009
Still more evidence of the perils of man in space...need I say more. Serious or not...the whole program needs to be reevaluated.

The New York Times
KENNEDY SPACE CENTER, Fla. — As the space shuttle Endeavour lifted off into orbit Wednesday evening, several pieces of debris fell off the external fuel tank and at least one hit the orbiter.

Astronauts in space and engineers on the ground will be spending the next few days examining and analyzing the damage to see if it might pose a danger to the Endeavour on re-entry.

The shuttle Columbia disintegrated in 2003, killing the seven astronauts aboard, because of damage to its wing caused by falling foam during liftoff.

The Endeavour's launch countdown proceeded without major glitches and the weather finally cooperated, with the skies clear after rain showers early in the afternoon.

The mission had been delayed five times — by hydrogen leaks, schedule conflicts, lightning strikes and a couple of rain delays.

That is one short of NASA's record for the number of delays. Two previous missions, one in 1986 and one in 1995, were delayed six times before launching on the seventh attempt.

"Persistence pays off," Peter Nickolenko, the launch director, said to the crew a few minutes before launch. "Good luck and Godspeed."

A camera on the external tank captured about a dozen instances of debris falling off the external tank. At least one, coming off about one minute, 46 seconds after launch, hit the orbiter, leaving three marks on the heat-resistant tiles on the orbiter's underside.

"We don't consider those an issue for us," William H. Gerstenmaier, the associate administrator for space operations, said at a news conference after launch. The white marks were probably just damage to the coating, not deep gouges, he said. "The issues will be in the back in the vehicle," Mr. Gerstenmaier said.

The shuttle crew will use a camera at the end of the robotic arm to examine the leading edges of the wings, and then as the orbiter approaches the space station, it will do a flip to allow the station astronauts to get a good look at the underside.

The mission, scheduled to last 16 days, includes five spacewalks dedicated to the construction of the International Space Station.

Engineers are monitoring one of the Endeavour’s three fuel cells, which generate electricity by combining hydrogen and oxygen.

Water is a byproduct, and one of the cells does not seem to be removing the water as efficiently as usual.

Tests "showed we're plenty fine on margin," said Michael P. Moses, the launch integration manager. "I don't expect the fuel cell problem to be any kind of problem at all."

The commander of the Endeavour mission is Mark L. Polansky, and the pilot is Douglas G. Hurley. Also flying on the Endeavour are Christopher J. Cassidy, Timothy L. Kopra, Thomas H. Marshburn and David A. Wolf, all of NASA, and Julie Payette of the Canadian Space Agency.

Mr. Kopra will remain on the International Space Station as a flight engineer, while Koichi Wakata of the Japanese Space Agency, who has been in orbit since March, will return to Earth on the Endeavour.

During liftoff, this crew marked a space exploration milestone. Before this flight, 498 people have been in space, beginning with Yuri Gagarin in 1961. Mr. Hurley, in the pilot's seat, became No. 499, as the Endeavour reached 100 kilometers of altitude, the arbitrary boundary of outer space. Because of his seating position, Mr. Cassidy was the 500th. Mr. Marshburn and Mr. Kopra are also first-time fliers, bringing the total to 502.

The Endeavour is bringing up the final pieces to complete the station's Japanese laboratory. The "front porch" of the laboratory is to hold experimental samples exposed to the extremes of outer space.
Posted by Mercury at 5:55 PM

Are they doing anything to celebrate the 40th anniversary of Apollo 11?

Well, I actually meant this new Space Shuttle mission, but that's okay, thanks.

Who knows. Perhaps once they dock with the ISS and begin cavorting, they may have something planned as a celebratory gesture. Otherwise, this mission has no connection to Apollo 11.