Periodic table and the arts 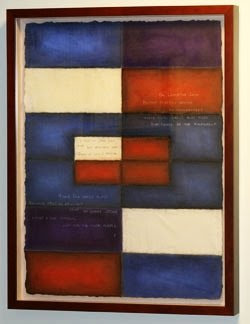 Langley Spurloc
Probably the most famous scientific chart and may even beat E=mc2 is once again being subject to the arts: Paintings and poetry.

Chemical & Engineering News
It's coming on four years since C&EN first wrote about the collaboration of former organic chemist turned multimedia artist Langley Spurlock and former ad writer turned poet John M. Tarrat. These longtime friends and artists in the Washington, D.C., area got it into their heads a few years back that they would recast the entire periodic table of chemical elements with the bold, interpretive license that makes artists so amusing and so valuable to society (C&EN, Oct. 3, 2005, page 60). [SEE BELOW] They have been making progress.

Back in the fall of 2005, Spurlock and Tarrat unveiled at the Studio Gallery in Washington their art-and-poetry hybrids for 17 main-group elements, as well as the 15 elements of the lanthanide series. The American Chemical Society, which publishes C&EN, provided some modest backing for the show and for the production of a companion CD. Spurlock and Tarrat considered that show to be their first installment on the complete artwork. Titled "Secrets of the Elements," the project ultimately will portray all of the naturally occurring and atom-accelerator-made elements on that iconic periodic table that readers of C&EN know and love. The two artists are now at about the halfway mark in the project. This affection for the elements, Spurlock and Tarrat noted recently in a café conversation with C&EN, is not universally shared by the general public, and they would like to change that.

When it comes to ACS's chief executive officer, Madeleine Jacobs, no arm twisting is required. She likes the series so much that she bought three elements: bromine, which hangs outside her office in Washington; thorium, which hangs in her living room; and antimony, her "all-time favorite," which also hangs in her home. "I love their work because I am a chemist at heart," Jacobs says of Spurlock and Tarrat's collaboration.

The overall response of the nearly 400 people who viewed the first show, most of them nonchemists, provide validation to the artists. "Based on responses—people tended to stay in the gallery for extended periods of time to view and learn—we became convinced that we weren't delusional about the show's value," Spurlock says.

The stories of the elements and their discoveries have been told and retold enough times to make library shelves buckle, but Spurlock and Tarrat have managed to offer a new take and a new voice on the matter.

Like the elements themselves, the pieces display an astounding diversity. Not one to lock himself into a single medium, Spurlock summons techniques that include painting, engraving, image transfer, collage, assemblage, photography, and encaustic sculpture; materials that include charcoal, paper, beeswax, acrylics, sand, gypsum board, pigments, wood, aluminum, galvanized steel, and silk; and a motivation to call upon whatever means will help him create the visual message that reflects the personality of the element that a piece is depicting.

In each case, Tarrat composes some variation of haiku or other short form of poetry, the words of which then become both a visual and textual component of the artwork. "We wanted to avoid the image-and-caption format," Tarrat tells C&EN. "So the words are part of the artwork."

For element 90, thorium, a geothermal heat-generating radioactive element named after the Norse god of thunder, Tarrat writes: "Thorium reveals/what lies hidden at the core/a magma ocean of hot rocks hammered by elves/from the darkness of matter." For the man-made, flash-in-the-pan element 118, ununoctium, Tarrat's element poem, titled "Jackflash," goes like this: "An element I/am a noble gas they say/Ununoctium/here there come gone in a flash/the whole three atoms of me."

Last October, the two had a follow-on exhibit of their project, again at the Studio Gallery. Called "Secrets of the Elements 2: The Unfinished Universe," the show displayed many of the 50 or so pieces that Spurlock and Tarrat had completed. Studio Gallery's director, Marina Reiter, promoted the show as "the second chapter of an ongoing collaboration in which chemist-artist Langley Spurlock and poet John Martin Tarrat tell a story as old as hydrogen."

Tarrat says he's amazed by how much he has learned and how much he has enjoyed the project. "There was nothing I wanted to do less than spend the rest of my life in a chemistry lesson," he recalls thinking when Spurlock first approached him with the idea. "But I did not want to be rude," Tarrat says, and he agreed to coinvent a new periodic table with Spurlock.

The first element the two worked into a piece was promethium, named after the mythic Greek character Prometheus, who stole fire from the gods, thereby providing mankind with a transformative, double-edged tool and attracting the gods' ire: Prometheus ended up chained to a rock where an eagle would peck at his liver for eternity. On the blue background of the piece are bright splotches made, Spurlock says, by letting fireflies walk on photopaper. In an unfamiliar but strong and attractive font, in all caps, are Tarrat's words that combine gravity with levity: "Unearthly metal/blue-green nightlight of heaven/Promethium steals/Restores to Andromeda/his liver eagle peckled."

"Fusion of Image and Verse"

Multimedia and haiku celebration of the elements premiers in Washington, D.C.

On Oct. 5, Spurlock and Tarrat will unveil their art and poetry representing 20 elements to the public in Washington, D.C. Eventually, they hope to complete works for all 118.

The artist and poet view their project as not just picture and caption, but integrated entities with a life and voice: "true science for the senses." One sculpture will sit on the floor; other pieces will hang from the walls. Bromine, which can be red, blue, or purple, ended up as three separate pieces. The collaborators describe the result of their work as a lens through which to view and understand the universe.

Their goal is to be inspiring and accessible. "The audience certainly is chemists," Spurlock says, "because I hear that a lot of chemists are like me in that they are specialists in the field and may not be aware of the broad range of elements." He hopes the exhibit will give them another chance to learn. The collaborators also want to draw the general, educated public and spark student interest.

"The funny thing about these people is that you start to explain this project to them, and they get it," Spurlock adds. "Not only do they get it, but they don't glaze over, and they start asking questions." He thinks that nontechnical viewers will feel more comfortable with this presentation of the elements because it goes beyond the scientific behavior to encompass the history of the element, origin of the name, and in some cases, mythology.

The names of the elements, for example, are derived in large part from ancient languages such as Latin, Greek, and Sanskrit. Or the names "celebrate earthly beings and heavenly bodies, smells, and colors-and some very, very odd behaviors," Tarrat says. At the show, each element will have its own "business card"-a colorful card with poetry on one side and a little more information about the element on the other.

Spurlock spent several years each as a researcher, professor, and federal administrator while doing art for shows in his spare time. Shortly after taking early retirement from the Chemical Manufacturers Association (now the American Chemistry Council), he wanted to delve into art based on science.

"The elements were kind of a natural focal point because there are lots of them, and frankly, as an organic chemist, I knew about seven of them: carbon, hydrogen, oxygen, nitrogen, sulfur, bromine, and chlorine," he says. "The rest was kind of an interesting part of the past when I took general chemistry."

Around the same time that the idea came to fruition, Spurlock became reacquainted by chance with British-born Tarrat at a party. They had met for the first time in the 1980s. Tarrat, too, had taken early retirement, in his case from TimeLife, to pursue a nonfiction book. As an advertising copywriter, he found "success is getting your attention and holding it with, say, a dozen words." At first, Tarrat hesitated over Spurlock's invitation to create haiku for each element. "Chemistry was always something I avoided almost as much as physics, but I was so flattered by the invitation." Although the duo realized a creative rapport early in the process, they stumbled against creative roadblocks and each other once in a while. Humor turned out to be a wonderful aid.

The first element they tackled was promethium because its origins and history easily adapted to storytelling. Ironically, Tarrat notes, the elements they thought would be easy to do are not done yet. So which comes first: the words or the pictures? How do they decide what media to use? Spurlock says they decided there was "no reason why we have to be consistent."

After systematically brainstorming themes for each element, including reading information in C&EN's 80th anniversary issue on the periodic table..., they decided to let inspiration lead the way to the final project. Spurlock notes that he has had to learn how to incorporate the lettering into designs and to collaborate with other artists in media he was not familiar with. "I get some of these professionals to execute what I design, and then I do the finish," he says.

Langley Spurlock
Posted by Mercury at 5:19 AM