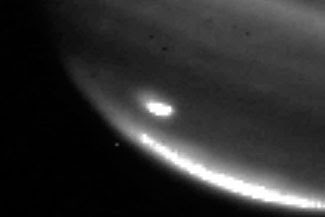 An event like this should humble the human species and represent a reminder that life is fragile and subject to the laws of physics.

The list of cosmic objects that could hit Earth is growing. Scientists study satellite 'tractors' and nuclear weapons as ways to divert asteroids headed our way.

The Christian Science Monitor
When an object smacked into Jupiter over the weekend, giving astronomers their best cosmic-collision show since the comet Shoemaker-Levy 9 in 1994, the giant gas ball of a planet took the poke like the Pillsbury Dough Boy.

For all its scientific interest, however, the collision also serves as a stark reminder that the solar system remains a shooting gallery – with Earth, as well as Jupiter, on the wrong side of the firing line.

The object's signature on Jupiter's cloud tops initially was discovered by Australian amateur astronomer Anthony Wesley as he gathered digital images of the giant planet through his 14.5-inch telescope. After alerting other astronomers to what appeared to be a "scar" in the cloud tops similar to those generated by the pieces of Shoemaker-Levy 9, NASA scientists trained a 3-meter (9.8-foot) infrared telescope on the planet and got a good look at the scar.

"It could be the impact of a comet," according to Glenn Orton, a scientist at NASA's Jet Propulsion Laboratory (JPL) in Pasadena, Calif., in a statement yesterday. "But we don't know for sure yet."

When it comes to objects Earthlings should keep an eye on, the catalog scientists have amassed is swelling.

Since 1995, astronomers associated with 10 search projects have discovered more than 6,200 near-Earth asteroids of all sizes, according to data from JPL. Some 784 are at least a kilometer (0.62 miles) across or larger. Just over 1,000 of the total have been deemed "potentially hazardous" – those that pass Earth at a distance of less than 4.7 million miles.

And while the biggest ones have the potential to inflict the most damage, scientists are gaining a new appreciation of the punch even small ones can deliver.

Two and a half years ago, scientists at Sandia National Laboratories in Albuquerque, N.M., conducted advanced supercomputer simulations of the June 1908 event over Siberia that flattened and scorched trees over a region 30 miles across. Estimates put the explosive clout of the air burst from either a meteor or comet fragment at between 10 and 20 megatons.

The good news: Calculations on Sandia's supercomputer, in 3-D, push that explosive yield down to between three and five megatons. The bad news: The calculations also indicated that the asteroid or comet fragment was much smaller than previously estimated. There are more small asteroids hurtling around us than large ones.

Sometimes they can seem to come out of nowhere.

Last October, astronomers detected an asteroid an estimated two to five meters across. Some 21 hours later, it entered the atmosphere over northern Sudan sprinkling the Nubian desert with meteorites. The object's blast was estimated at roughly 1,000 tons of TNT.

For asteroid specialists, this was a live-fire test of protocols they'd developed to alert astronomers to monitor the object to refine orbital and impact-location estimates – and to alert national authorities that a direct hit was on the way.

The incident "underscored the successful evolution of the Near-Earth Object Program's discovery and orbit-prediction process," wrote JPL scientists Steve Chesley, Paul Chodas, and Don Yeomans in a post-event report on the incident.

The goal, of course, is to spot these objects and produce highly refined orbit estimates in time to take defensive action, if necessary.

In a lengthy analysis of options that earned him a newly-minted PhD in aeronautical engineering from the University of Glasgow, Joan Pau Sanchez Cuartielles sorts through several approaches ranging from detonating a small nuclear bomb near an asteroid to using a modest-sized satellite as a kind of tractor that tugs the asteroid into a less dangerous orbit, connected to the asteroid by their mutual gravity.

The stand-off nuclear option (with an explosive yield tailored to the mass and density of the asteroid) turned out to be the most effective, although politically troublesome. The gravity tug could be effective with long lead times, or if the goal is to nudge an asteroid just enough to ensure it avoids a gravitational sweet spot, or keyhole, that would put it on a collision course with Earth decades into the future.
Posted by Mercury at 5:23 AM