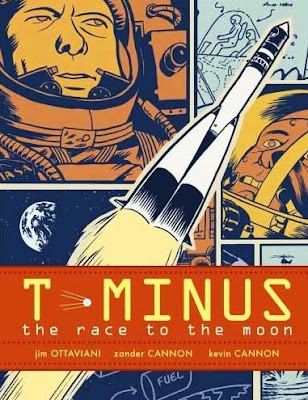 T-Minus: The Race to the Moon

The New York Times
The early space race was really a chase, with the United States trailing its superpower rival — the So­-viet Union — badly. The Soviets took a strong lead by tossing Sputnik 1 into Earth orbit in 1957 and smacking the moon in the face with the Luna 2 probe in 1959. Although the United States launched its first Earth satellite in 1958, its less powerful rockets had a tendency to detonate on the launch pad like short-fused bombs or break up after takeoff and sizzle like Fourth of July fireworks, or veer off course.

"T-Minus: The Race to the Moon," a graphic novel written by Jim Ottaviani, tells the story of America’s come-from-behind victory in the space race's main event — a manned moon landing. Ottaviani takes minimal liberties with the actual events to compress the great race into 124 pages: he deftly reimagines and expands the roles played by a few real-life aerospace engineers and contractors and imagines plausible dialogue for places where the historical record is ­incomplete.

The illustrations by Kevin Cannon and Zander Cannon (no relation) capture both the inky vastness of space and the glory of the big flying machines, but the book's primary subject is human emotions, not rockets or the heavens. Again and again, "T-Minus" — rocketeer lingo for time until takeoff — relies on close-ups to dramatize the life work of rocket visionaries from both nations' space programs, like Robert Goddard, Wernher von Braun and Sergei Korolev. It's about time the people who designed and built the spacecraft got top billing over the flyboys.

The gap between the two programs seemed to widen in 1967 after Gus Grissom and his two crew mates died in a fire during a launch-pad practice session of their Apollo 1 capsule. NASA, which ran the space program, suspended Apollo flights while it made the craft safer, and President John F. Kennedy's goal of landing on the moon by the end of the 1960s appeared unreachable. But then the Soviets stumbled. Korolev, a top rocket designer, died unexpectedly during surgery in 1966, and the Soviet cosmonaut Vladimir Komarov was killed during the emergency landing of the Soyuz 1. These events helped to sidetrack the Soviet program and create an opening for the Americans.

A series of successful Apollo missions in the late 1960s restored confidence at NASA and provided the steppingstones for an American moon landing. Just before Christmas 1968, in a preview of what was to come, the re-engineered Apollo 8 left Earth’s gravity and orbited the moon. "T-Minus" treats this flight to as many pages as the moon landing mission itself. In March 1969, Apollo 9 practiced docking with the lunar landing vehicle in Earth orbit; two months later Apollo 10 did the same in moon orbit; and on July 20, 1969 — 40 years ago — Apollo 11’s Neil Armstrong and Buzz Aldrin walked on the moon at Tranquillity Base while Michael Collins orbited above in the mother ship that would ferry them back home.

"T-Minus" captures the optimism and courage of both countries' space pioneers, making it an ideal entry point for new readers intrigued by the topic. Space know-it-alls will learn something, too. Who knew that the Apollo’s Saturn V launcher was delivered from Huntsville, Ala., to its Florida launch pad by barge?

This is a well-researched book. In its constellation of useful facts, dates and figures, I found just one error: it wrongly states that John Glenn's Friendship 7 orbited the Earth in 1961. As the authors know, Glenn's flight came in 1962.
Posted by Mercury at 7:55 AM

Email ThisBlogThis!Share to TwitterShare to FacebookShare to Pinterest
Labels: "T-Minus: The Race to the Moon", Jim Ottaviani, space race