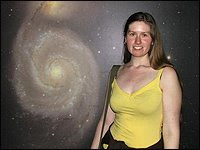 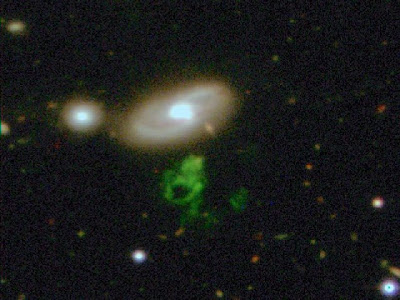 Another example of the value of amateur scientists.

NPR
A Dutch primary school teacher has accidentally discovered what some are calling a cosmic space "ghost" — a strange, greenish, gaseous object with a hole in the middle that may represent a new type of astronomical phenomena.

The teacher, Hanny van Arkel, stumbled upon the cosmic object in 2007 while doing volunteer work for Galaxy Zoo, a Web site that enlists the public's help in identifying galaxies. Van Arkel, 25, says she got involved with Galaxy Zoo because she's a fan of Brian May, the guitarist from the rock band Queen, who also volunteers.

The Zoo sought out volunteers because it had a backlog of celestial images but almost no computers that could process the images. Van Arkel was one of 150,000 volunteers who assisted in classifying more than 1 million galaxies over the past year.

During one of her assignments, the armchair astronomer says she saw something that "looked like a regular galaxy but much bluer." Van Arkel tells Scott Simon that she had no idea her discovery was so important until she spoke with Galaxy Zoo's scientists, affectionately called Zoo Keepers.

The cosmic object has been nicknamed "Hanny's Voorwerp." The greenish Voorwerp does not contain any stars and is made entirely of very hot gas. It is illuminated by remnant light from a nearby galaxy.

"At first we thought it was a distant galaxy, but we realized there were no stars in it so that it must be a cloud of gas," Dr. Chris Lintott of Oxford University, who helped launch Galaxy Zoo, says in a press release.

He says astronomers think it may be light from a quasar, "the bright, stormy center of a distant galaxy powered by a supermassive black hole."

"The quasar itself is no longer visible to us, but its light continues to travel through space and the Voorwerp is a massive 'light echo' produced as this light strikes the gas," Lintott says in the statement.

And she says she'll keep searching the skies.

"It's not that I think that next week I will discover something else, but there's Galaxy Zoo 2 coming, so they still need us around and I will surely be involved," Van Arkel says.


Amateur scientists
Posted by Mercury at 5:43 AM

Abstract: The Galaxy Zoo citizen science website invites anyone with an Internet connection to participate in research by classifying galaxies from the Sloan Digital Sky Survey. As of April 2009, more than 200,000 volunteers had made more than 100 million galaxy classifications.

In this paper, we present results of a pilot study into the motivations and demographics of Galaxy Zoo volunteers, and define a technique to determine motivations from free responses that can be used in larger multiple-choice surveys with similar populations. Our categories form the basis for a future survey, with the goal of determining the prevalence of each motivation.