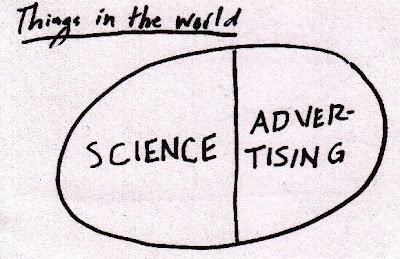 We see this everywhere--scientists are revered in their opinion on just about everything. But is it ethical?

"The corporate takeover of 'reason' and 'science'"

RINF.COM: THE BREAKING NEWS ALTERNATIVE
Those who say that they favour science and rationality can end up supporting the opposite. Science and rationality retain a very significant force in public debate and is thus worth exploiting by vested interests. The strategic use of science is a well used part of the armoury of the public relations industry. Indeed it is true to say that the founding of the PR and lobbying industries were based on attempts to pervert rationality and science in the interests of vested interests. The very earliest PR practitioners such as Freud’s nephew Edward Bernays, were adept at this. Bernays use of psychology was famously put to use in promoting cigarette smoking among women by styling them ‘torches of freedom’ and associating them with women’s equality and liberation.

Bernays was amongst the first to make a profession out of what he called the 'conscious' and 'intelligent manipulation' of the beliefs and behaviour of the public. Those who 'manipulate this unseen mechanism' of society were, he wrote, an 'invisible government which is the true ruling power of our country.' 1

Today the PR industry is still based on the same philosophy. The promotion of 'science-i-ness' is an ever present talisman. It has two cardinal principles. The first - seen increasingly following the neoliberal turn of the late 1970s – is that where science or truth will undermine corporate interests, the science or truth must be changed. The second principle is to disguise the source of information where useful. When a message is likely to be disbelieved or treated with scepticism when said openly by a corporation or politician, the words must be put in the mouth of someone more believable and apparently disinterested. This is the famous third party technique and has led to a whole swathe of scientists taking corporate money to promote corporate friendly science.

Because science is still such a resource it is imperative for powerful interests to try and co-opt, undermine, distort, influence or buy 'science'. This is now so widespread that the issue is openly debated in the scientific journals and there is a small but growing number of studies examining the question of the potential bias introduced by corporate funding. 2 From the 50 year battle to protect the tobacco industry to today’s strategic use of science in climate change denial, and to muddy the waters as obesity and binge drinking become crisis issues, scientists have been recruited as a resource. For example they receive research grants, are paid as consultants or have their names added to academic journal articles ghost written by PR operatives. Some scientists are even kept on retainers by corporations or lobby groups and can be wheeled out to order.

The third party technique fits nicely into the co-option strategy. Scientists whose research budgets are nicely swelled by corporate money can often be surprisingly willing recruits to speak on behalf of industry. A study of toxic industrial contaminants in farmed Salmon published in Science in 2004, was greeted with a chorus of condemnation in the press. Many of the voices were described as academic scientists. In fact almost all had financial links to the industry undisclosed in the press. The study itself was well grounded. 3 Nonetheless the industry campaign to remove the stain of poisoned Salmon from the public mind was largely successful.

In the US and UK the creation of 'front groups' is common. These are organisations usually including a science-like term in their title such as 'foundation' 'institute' or 'research'. In the UK the food industry has been able to sabotage healthy eating initiatives since the 1970s by – among other things - funding the apparently independent British Nutrition Foundation which is able to place representatives on a myriad of government committees. 4 The International Life Science Institute sounds a bit scientific. In fact it is a food industry lobby group funded by hundreds of the biggest food, pharma and chemical companies and was for years more or less directed by the Coca Cola company. It was able to infiltrate the WHO process on dietary sugars by covertly funding some of the scientists involved. 5 In January 2006 the WHO decided that ILSI ‘can no longer take part in WHO activities setting microbiological or chemical standards for food and water’, as a result of complaints about its lobbying tactics. 6

The PR industry is at the forefront of creating and managing front groups today. The Scientific Alliance turned out to be run from the offices of Foresight Communications a PR firm in central London and to be funded by Scottish quarry owner Robert Durward. The Social Issues Research Centre 'fosters the image of an ultraconcerned public spirited group' and of 'a heavy-weight research body'.7 It is also run by a PR/marketing company from the same address. That company - MCM Research - used to announce on its website its approach to open and truthful communications: 'Do your PR initiatives sometimes look too much like PR initiatives? MCM conducts social/psychological research on the positive aspects of your business… The results do not read like PR literature'. 8

Of course the corporations can do little else than lie and attempt to co-opt science. They require to extract maximum surplus from both labour and natural resources to be part of the global market. Their problem is that these qualities of corporate operations are not very attractive to the overwhelming majority of the population of the globe. As a result corporations and their PR agents must try to undermine or co-opt science. The only defence is transparency, enhanced ethics standards and public funding of research.