Shroud of Turin to be questioned once again 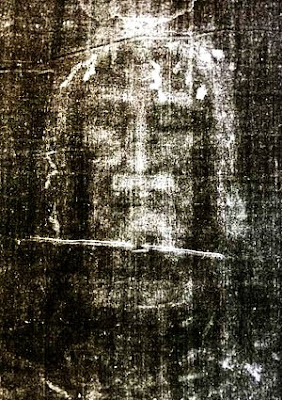 The world must be feeling insecure again with the release of British UFO data, Bigfoot, and now once again the Shroud of Turin.

A Colorado couple researching the shroud dispute radiocarbon dating of the alleged burial cloth of Jesus, and Oxford has agreed to help them reexamine the findings.

The Los Angeles Times
The tie that binds John and Rebecca Jackson is about 4 feet by 14 feet, woven of herringbone twill linen. It once led to their romance; years later, it still dominates their thoughts and fills their conversations.

It brought Rebecca, an Orthodox Jew, to the Catholic Church; it led John to suspend himself from an 8-foot-tall cross to study how blood might have stained the cloth. Together, the two have committed to memory every crease, scorch mark and unexplained stain in their years-long pursuit of the mystery:

Is the Shroud of Turin -- which allegedly bears the image of a crucifixion victim -- the burial cloth of Jesus?

In 1988, science seemed to put that question to rest.

Radiocarbon dating by three separate laboratories showed that the shroud originated in the Middle Ages, leaving the "shroud crowd" reeling. Shroud skeptics responded, "We told you so." The Catholic Church admitted that it could not be authentic. Many scientists backed away.

But John Jackson, one of the shroud's most prominent researchers, was among those who insisted that the results made no sense. Too much else about the shroud, they said, including characteristics of the cloth and details in the image, suggested that it was much older.

Twenty years later, Jackson, 62, is getting his chance to challenge the radiocarbon dating. Oxford University, which participated in the original radiocarbon testing, has agreed to work with him in reconsidering the age of the shroud.

If the challenge is successful, Jackson hopes to be allowed to reexamine the shroud, which is owned by the Vatican and stored in a protective chamber in the Cathedral of St. John the Baptist in Turin, Italy.

Jackson, a physicist who teaches at the University of Colorado, hypothesizes that contamination of the cloth by elevated levels of carbon monoxide skewed the 1988 carbon-14 dating by 1,300 years.

"It's the radiocarbon date that to our minds is like a square peg in a round hole. It's not fitting properly, and the question is why," he said.

On that point, Christopher Ramsey, head of the Oxford Radiocarbon Accelerator Unit, seems to agree.

"There is a lot of other evidence that suggests to many that the shroud is older than the radiocarbon dates allow, and so further research is certainly needed," says a statement on his website. "Only by doing this will people be able to arrive at a coherent history of the shroud which takes into account and explains all of the available scientific and historical information."

Steven Schafersman, a geologist who maintains a website skeptical about the shroud, dismisses the effort as one that's bound to fail.

"He's had other ideas, but they've all been shot down, and this one will be shot down too," he said of Jackson. "Ordinary people know this is just a relic."

But others are challenging the radiocarbon date.

At a conference sponsored by the Shroud Science Group at Ohio State University this weekend, the Los Alamos National Laboratory presented findings that the 1988 test results were flawed because the samples tested came from a portion of cloth that may have been added to the shroud during medieval repairs.

The shroud's historical record dates back to 1349, when a French knight wrote to the pope of his possession of a cloth he described as the burial shroud of Christ. In 1978, a team of scientists led by Jackson conducted a series of tests on the shroud, including X-rays and chemical analyses. They concluded that the shroud was not painted, dyed or stained and that the blood stains were real. But those findings did little to quell the controversy surrounding the shroud.

Many believe that Jesus imprinted his image on his burial cloth during his resurrection, and others think that the shroud is the authentic burial cloth but that the image was formed by natural processes. Skeptics maintain that the shroud is a forgery created by a medieval artist seeking to display it to relic-hungry pilgrims. The debate often is bitter; each side accuses the other of twisting facts and ignoring evidence that doesn't fit its view.

In this world, Jackson has long been a central figure.

A former professor at the Air Force Academy and scientist at the Air Force Weapons Laboratory, Jackson holds a doctorate in physics from the U.S. Naval Postgraduate School. Born and raised in Denver, he also is a devout Catholic who has been transfixed by the shroud since he first saw its image at age 13.

"If you love Christ, why wouldn't you want to explore the possibility that you have an artifact of his material existence on Earth?" he said, adding that his faith isn't incompatible with his scientific training: "How I think about the shroud comes from the shroud. It's not, 'Gee, I'm a Christian, so I'll force it to be what I want it to be.' That's not scientific logic."

Whereas Jackson has focused single-mindedly on the shroud for 35 years, his wife is a relative newcomer.

Raised in Brooklyn, N.Y., Rebecca Jackson, now 60, was 34 when she impulsively decided to enlist in the Army and ended up at Ft. Carson, near Colorado Springs, as a cook. She converted to Christianity, a religion she said began to appeal to her as a teenager.

In 1990, she was watching a documentary on the shroud when it occurred to her that the image of the man's face looked like her grandfather's. She tracked down Jackson, who had appeared in the film and also lived in Colorado Springs, to talk about her reaction. Their shared interest in the shroud led to a relationship between the soft-spoken academic and the effusive woman, and her religious conversion followed. Together, they give speeches worldwide and run the Turin Shroud Center of Colorado, with their research funded mostly by donations.

Twice a week, John Jackson works with a team of volunteer researchers in his Colorado Springs laboratory. Stretched across one wall is a life-size photo of the shroud; on a table is the Styrofoam figure of a man, dubbed Roger, an approximation of Jesus' body in his tomb. Jackson has conducted research on the shroud's crease marks, image formation and how blood flows from a crucified body, which he studied by suspending his own body from a cross.

Keith Propp, 55, has worked with Jackson for the last 23 years. "It's like we're on an archaeological expedition that's not finished. I'm not sure we'll ever be truly finished," he said. "A lot of the pleasure is in the journey itself."

These days, the journey focuses on the radiocarbon issue -- working to prepare samples for evaluation at Oxford.

"If we get to the point where we believe we have a viable hypothesis that works in the lab, then we have scientific grounds to go to Turin and say, 'Here's what we think has happened to the shroud. These are the effects we need to look for. Can we please have access?' " said Jackson, who does not subscribe to the theory that the tested sample was different than the rest of the shroud.

Though Ramsey, of Oxford, agreed to collaborate, he has said that he doesn't believe contamination would have had much effect. So far, Jackson's initial tests have shown no significant reaction. But the team has yet to reproduce the specific storage conditions of the shroud, Ramsey noted.

Because his laboratory is small, with only one reaction chamber in which to prepare the samples, Jackson said, it could take many months to complete the experiment.

But to a man who has already spent 35 years on the subject, that may not be so long. "We'll do what we have to do to get the information we need," he said.

Birth of a very popular mythology

SETI--ultimate loneliness?
Posted by Mercury at 7:23 AM