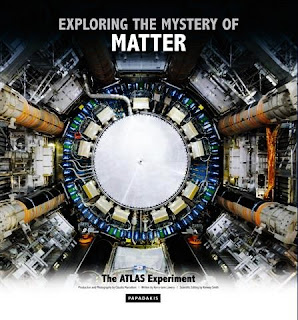 Symmetry
Exploring the Mystery of Matter started as an internal photodocumentary of the ATLAS experiment but is now in the hands of a London publisher. Heavy with illustrations and photographs, it may be a handy tool for high-energy physicists, says coordinator, creative director, and photographer Claudia Marcelloni: "If you’re a particle physicist, and you're at a party and someone says, 'So what do you do?' you show them this book and that explains it."

ATLAS is an enormous detector experiment at the Large Hadron Collider, scheduled to start operating this fall on the Swiss-French border. Among other things, it will examine dark matter candidates and search for the elusive Higgs particle. The 168-page book does include a lot of facts (a proton in the LHC will make 11,245 circumnavigations of the collider ring per second!) and provides a plethora of illustrations and photographs (one chapter titled "Tunnel Vision" has some extraordinary shots of the tunnels being excavated and pieces of the accelerator being put together). But what makes it a coffee-table book, rather than an information resource or a textbook, is that "the book is not about teaching the science," Marcelloni told me. "It’s meant to educate people about the collaborators–these brilliant minds that are doing amazing experiments in a very creative fashion."

ATLAS hired Marcelloni to document the construction of the experiment and the 2200 physicists from 37 nations collaborating on it. Kerry-Jane Lowery, a writer from Geneva, provided the text. The book was meant for the scientists to take home and perhaps share with friends. But a year into the project, Marcelloni and her team realized it might also appeal to the general public. "We started showing the completed chapters to our friends, and the [ATLAS] collaborators were showing it to their friends, and people were getting interested and asking questions and saying, 'We want to see it when it's done.' I think in general physics is not a very popular topic. People can't relate to it. But I know people can relate to photography; they can relate to images."

At first, she says, the collaborators were a little confused. "Physicists aren't used to being part of something like this. Here were two girls, who were not a part of the collaboration, running around saying things like 'So how does it feel to be a part of this?' They were surprised," she recalls, laughing. But soon the scientists were thrilled, she says: "We got so much help from the collaboration; we got at least two or three people to read every piece of text and then I got ten or more people to look at the pictures."

Offering the book to the general public has led Marcelloni and her team of writers, designers, three physicists, and an engineer to strike a new balance. "We still want the collaborators to enjoy it, but we don’t want it to go over the heads of the public," she says. 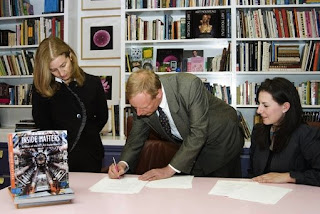 It has been almost two years in the making, but the ATLAS book – pet project of CERN photographer Claudia Marcelloni De Oliveira – is almost ready. Currently at the printers, and expected to be available for purchase by October 4th 2008, the 168-page book uses photographs from Claudia and other contributors to tell the technical and human stories behind the construction and installation of the ATLAS detector.

The project began with the intention of producing a keepsake for members of the collaboration, but it soon became clear that the book could have a much wider appeal. "We were going to print it ourselves," explains Claudia, "but as it started evolving, people started saying we really should try to publish."

With encouragement from Markus Nordberg, she began making enquiries about how to find a publisher. After approaching the head of the CERN library, Jens Vigen, for advice on where to start, she discovered that Joanne Yeomans, a colleague of his, was just about to set off for the largest book fair in the world, held annually in October in Frankfurt, Germany.

"I made a quick advert about the book for her to take with her, but she was looking for a strange niche of publisher," Claudia remembers. "It’s not an art book, and yet it’s not a science book; it's an artistic book about science."

It was a stroke of luck then that Joanne came across Papadakis – a publishing house based in Newbury, England, that actively seeks works which marry strong aesthetic appeal with rigorous-but-readable scientific content. Not only that, but the family who run the business had more than a passing interest in CERN themselves, as daughter Alexandra Papadakis explains: "My father was a physicist before he became a publisher, and when I was a child he used to tell me about these amazing experiments going on underneath the mountains in Geneva … As soon as I heard they were looking for a publisher, I pounced on it."

"We sent an email while we were still there in Frankfurt," she adds enthusiastically, "saying that it was be a book we would love to be associated with."

CERN put out a tender for the contract, and Claudia contacted almost 50 publishers with details of the project. "The bigger publishing houses were concerned about potential sales, because the book will have such a niche market," she explains. "We had a lot more interest from the smaller publishers, but again, they all have their own niche markets, and Papadakis really stood out for us."

Papadakis and her late father were invited to CERN in November, where they talked in more detail about the book project with Markus, and were taken on a tour of the cavern by Peter Jenni. "I couldn't believe the wiring," she says. "I trained as an architect, and I think to build something that's so visually beautiful – the symmetry, the colour, the scale – is incredibly exciting. Let alone what it’s there to do!"

Over the last month, the text has been finalised and proofread, and the pictures checked and colour corrected to ensure that all the images on a given page have the same tone. Currently, a colour proof is being printed up to allow Claudia to make a final check on the image reproduction ahead of the book being forwarded to the printers in Hong Kong for mass production.

A portion of the first print run will be heading to Geneva in early October, and will be available for collaborators to purchase from the ATLAS Secretariat, the CERN shop, or through their own institutes. The remaining copies will be taken on by Papadakis' agents and distributors, who are active in most areas of the globe, and marketed to science organisations, educational institutions, libraries, and other interested parties.

The book will measure 245 by 255 millimetres, and will be hard-backed with a dust jacket. The initial printing will be done only in English, but a French version may be considered in the future. And for those of you who contributed your suggestions for a name for the book at the Open Day back in April, the wait is over: the official title of this slice of ATLAS history will be: Exploring the Mystery of Matter: The ATLAS Experiment.

The book will be officially launched on October 4th, at the party being held to celebrate the completion of the detector, but ATLAS members can pre-order their copies now, at reduced cost, through atlasbook.ch.

The ATLAS book production team are: Claudia Marcelloni De Oliveira as creative director and photographer; Kerry-Jane Lowery as writer; Neal Hartman as copy-editor; Kenway Smith as Senior Scientific editor; Manuela Cirilli and Heinz Pernegger as assistant editors; and Andre-Pierre Olivier and Fabienne Marcastel as designers.
Posted by Mercury at 4:37 AM