No to Yucca Mountain repository 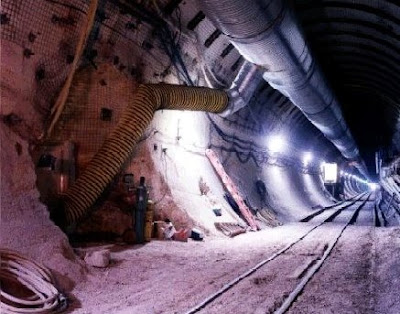 Chemical & Engineering News
The cost of the proposed Yucca Mountain nuclear waste repository in Nevada has grown to a projected $96.2 billion over its lifetime, according to a revised estimate released by the Department of Energy on Aug. 5.

Taking inflation into account, the price tag increased by 67% over DOE's 2001 estimate of $57.5 billion. The total system life cycle cost estimate, updated to 2007 dollars, includes the cost to research, construct, and operate the Yucca Mountain facility for 150 years, from the beginning of the program in 1983 through closure and decommissioning in 2133.

"This increased cost estimate is reasonable given inflation and the expected increase in the amount of spent nuclear fuel from existing reactors with license renewals," says Ward Sproat, director of DOE's Office of Civilian Radioactive Waste.

The updated estimate reflects a 30% increase in the amount of commercial spent nuclear fuel to be disposed of in the repository, from a 2000 estimate of 83,800 metric tons to a 2007 estimate of 109,300 metric tons, according to DOE.

The increased volume would extend the transportation period by 16 years and the emplacement period by 25 years. The larger amount of spent nuclear fuel is a result of existing and anticipated license renewals at operating nuclear power plants throughout the U.S., DOE says.
Posted by Mercury at 5:09 PM