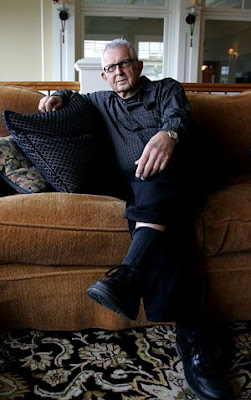 Perhaps in time his name and association with fuel cells will be more popular.

Geoff Ballard, the Canadian entrepreneur who transformed pollution-free fuel cells from an exotic power source used in the space program to an everyday engine used in industry, buses and, perhaps soon, in cars, died Aug. 2 at Lions Gate Hospital in Vancouver from complications of liver disease. He was 75.

In 1999, Time magazine named Ballard a "Hero of the Planet" for his efforts to reduce pollution in cities by getting fuel cells into cars -- an effort that has borne little fruit yet, but that is receiving renewed emphasis because of the rising price of gasoline.

Ballard's name "will forever be associated with this company's fuel-cell products, which are being deployed as an energy source for applications in a growing number of important global markets," said John Sheridan, president and chief executive of Ballard Power Systems.

A geophysicist by training, Ballard spent the first years of his career working for the U.S. Army, specializing initially in microwave communications and later in ice physics. In the latter role, he studied ways to hide fuel tanks for U.S. bombers in Greenland's ice fields.

When the energy crisis hit the United States in 1974, Ballard was chosen to lead the newly created Federal Energy Conservation Research program.

Stymied by Congress' refusal to provide what he considered adequate funding, he quit and set out on his own, buying a decrepit Arizona motel for $2,000 and turning it into a research laboratory. He initially tried to create a lithium battery that could be used instead of an internal-combustion motor in cars, but that effort led him into bankruptcy.

The company moved to Vancouver when it got a contract to provide a lithium battery for a submarine owned by Canadian industrialist John Horton, who agreed to provide funding for the company.

In 1983, Ballard teamed up with engineer Paul Howard and electrochemist Keith Prater to try to develop fuel cells, getting seed money from the Canadian military.

Conceptually, fuel cells are simple. Hydrogen and oxygen are combined in the presence of a catalyst to produce electricity, with the only waste product being water.

The concept for the technology was developed in the 1830s by British scientist Sir William Grove, but implementation had been slow and fuel cells proved to be either bulky and inefficient or very expensive.

The three entrepreneurs worked tirelessly to improve the efficiency of existing fuel cells and reduce their size and cost.

A breakthrough moment for the company came in summer 1989 while Ballard was relaxing in a spa at the Hollyburn Country Club in Vancouver with a British Columbia official. Ballard convinced the official that his company could produce a municipal bus that would run on hydrogen and emit only water vapor.

"Can you get me a green photo op?" Ballard later recalled the official asking him.

Four years later, officers of Ballard Power gathered with Canadian officials to ceremonially sip water collected from the tailpipe of the $4.2-million bus.

Eventually, Daimler AG and Ford Motor Co. bought into Ballard, investing more than $750 million in development of the technology. This year, Ballard sold the company's automotive fuel-cell division to the two auto manufacturers for nearly $100 million.

One of the most promising projects to come out of the research was a fleet of 60 fuel-cell-powered buses that have been operating for six years in Germany, Japan, Singapore and the United States. The buses produce no emissions and are 30% more fuel-efficient than diesel buses.

Ballard Power has chosen to concentrate its efforts on fuel cells for use indoors -- such as in forklifts -- where emissions are a bigger problem and a pricier power source is feasible.

Ballard himself, meanwhile, recognized that fuel-cell cars could never be viable unless a distribution system could be established for hydrogen. In 1999, he started General Hydrogen to explore ways to manufacture and market the fuel. That company was bought last year by Plug Power Inc. for $10 million.

Given current technologies, fuel cells are not yet an optimum solution. Hydrogen is generally manufactured by an electrolysis process powered by burning fossil fuels. The net effect of implementing fuel-cell cars would thus be a transfer of emissions from cities to remote power plants -- not necessarily a bad idea, Ballard argued.

To overcome the pollution problem, Ballard in his later years argued that nuclear energy should be used to generate hydrogen.

An estimated 200 fuel-cell-powered cars running on hydrogen are now operating on California roads, and car companies hope to increase that number in the next few years. But major problems remain, including the high cost of the technology and the lack of an infrastructure for delivering hydrogen to consumers.

At least three stations that offer hydrogen to commercial customers are operating in Los Angeles, and Royal Dutch Shell recently upgraded a service station in West L.A. to provide hydrogen to consumers.

Geoffrey E. H. Ballard was born Oct. 16, 1932, in Niagara Falls, Canada. He studied at Queen's University in Kingston, Canada, then received his doctorate in earth sciences from Washington University in St. Louis.

He fully retired two years ago because of health problems.

Ballard is survived by his wife of 52 years, Shelagh; and three sons, Curtis, Mark and Edward.
Posted by Mercury at 5:30 PM

Lithium Ion batteries are very expensive at $12,000 to $15,000 each per car according to informed sources. Does this make Daimler and Ford investments in Ballard's automotive division more realistic?

Like everything else, the manufacturing costs will decline...remember the very first VCRs--$100s.