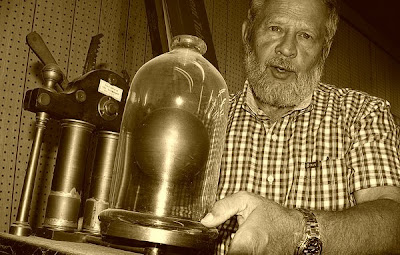 Richard Zitto is seen holding a rare two-cylinder vacuum pump from the 1850s, made by the Benjamin Pike Company, which produced physics apparatus in New York City. Zitto is in talks with the Smithsonian Institution to possibly put the antique vacuum pump in the national museum’s collection.
A collector, Richard Zitto, of scientific apparatus will now offer items to the Smithsonian Institute. Many instruments are rare and exhibit a craftsman's skills and a sense of aesthetics.

Salem News
Retired physics instructor Richard Zitto stores much of his antique physics apparatus collection in a two-story barn, in a cozy home office with an Albert Einstein action figure on the wall, and in a garage so cramped and cluttered it's hard to walk through.

Inside that garage last week, Zitto lifted up something that, to untrained eyes, resembles a dusty hunk of junk. It's actually a rare vacuum pump - in working condition - that dates from before the Civil War.

And it soon may be on display at the Smithsonian Institute in Washington, D.C.

Zitto will meet with representatives of the national museum in October so Smithsonian officials can decide if they would like to include in their collection two of Zitto's antiques - one is the two-cylinder vacuum pump, the other an electro-static generator, both made in the 1850s by the Benjamin Pike Company.

Zitto hopes the Smithsonian might to take more than just the two pieces from his large collection of vacuums, voltmeters, amp meters, sonometers, and other physics demonstration equipment. If the collection gets passed down a generation, his two grown daughters certainly won't know what to do with it.

"Our kids tell us that he better have directions for taking care of it when he croaks - when he passes away - because they'll have no idea what to do with it," said Zitto's wife, Pam.

Zitto began amassing his large collection of physics-related antiques in 1969, he said, just one year after he began his first teaching job, at Kenton Junior High School, in Kenton, Ohio. A new high school had been built and the district purchased all new physics equipment.

"I just started just to salvage stuff," Zitto said. "I was afraid it was going to be thrown away. Some of the instruments were really beautiful. I didn't want to see them trashed."

The antiques, often very sturdy and with detailed brass and woodwork, are simply better than new physics teaching instruments, Zitto said. New instruments may be more precise, but only slightly. The old ones get the job done just as well.

Zitto later taught physics at Boardman High School from 1976 to 1999 and at Youngstown State University from 1981 until December 2007. His classes often utilized the antiques in his collection.

In 1978, Zitto, along with six other local physics teachers, founded the Physics Olympics at YSU. At its zenith, 32 area high schools schools participated, competing in areas such as the mousetrap racer, the egg drop and the bridge break, Zitto said. He has been involved every year since its beginnings, he said.

Zitto also helped start the Youngstown Area Physics Alliance, for which he served as co-director for 18 years.

In July, The American Association of Physics Teachers awarded Zitto a Distinguished Service Citation at its summer meeting in Edmonton, Alberta, Canada.

He also keeps busy by serving on Columbiana's parks and cemetery and library boards. He's been on the library board for 20 years and helped steward the building and later additions to the library.

He's also working to turn his barn into a museum space for his collection.

That credo also applies to his physics antiques. All of the instruments are in working order, or will be, once he gets the chance to fix them.

Catalogue of Electrical and Galvanic Apparatus

Laboratory Supplies and Chemicals for Chemists and Bacteriologists [A. Daigger & Company]


Link to sample instruments and a list of apparatus museums:

Physics instruments of days passed
Posted by Mercury at 7:51 AM