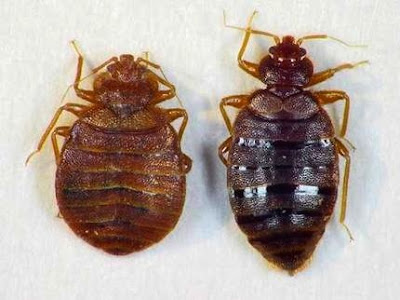 Prospects of college life include the "jitters", professors, social life, grades, high costs of books and for those living on campus...BEDBUGS.

USA TODAY
Just as they've made an itchy, scratchy comeback in hotel rooms, bedbugs increasingly are appearing in dorm rooms, say college officials and pest-control experts, who are busy devising ways to eradicate the bloodsuckers.

Bedbugs are everywhere, he says. "They're finding these things in public transit, in movie theaters, in cruise ships, in all the hospitality accommodations."

PERSONAL ACCOUNT: How a USA TODAY reporter handled them

Blame an increase in international travel, bigger bedbug populations worldwide, new protocols that discourage widespread spraying and possibly even tougher bugs that are resistant to pesticides.

The size of an apple seed, the nocturnal six-leggers hitchhike on luggage, old furniture and clothing and can live up to a year without a blood meal. So a dorm room left empty over the summer poses but a brief nutritional challenge.

Among those fighting the bugs:

• Ohio State University has seen "several incidents" over the past 15 months, spokeswoman Ruth Gerstner says, including an outbreak in May 2007 in three rooms of a high-rise dorm. Workers treated 114 rooms.

• At the University of Florida's 4,000 dorm rooms and 980 apartments, "bad" infestations are limited to a couple of times a year, says Wayne Walker, who supervises dorm pest control. The school treats the problem with extreme heat, steam cleaning and pesticides.

• Greg Baumann of the National Pest Management Association says he has heard from "quite a few" members called to campuses. Like hotel rooms, dorms are the ideal bedbug habitat: small and crowded, with "quite a bit of humanity per square foot."

Unlike cockroaches, bedbugs aren't an indicator of bad housekeeping, says Richard Cooper, co-author of Bedbug Handbook: The Complete Guide to Bedbugs and Their Control. "The bug doesn't discriminate on social status. Blood's blood."

Texas A&M has spent $37,000 in the past year to fly in bedbug-sniffing dogs. This fall, Mizer plans to call in a Minnesota outfit called Temp-Air, whose eradicator heats the room overnight to 130 degrees, killing the bedbugs but leaving students' belongings unharmed. His other secret weapon: eternal vigilance. "When we get a report, we get the pest-control staff, and we respond. These bugs can take over quickly."
Posted by Mercury at 4:32 AM