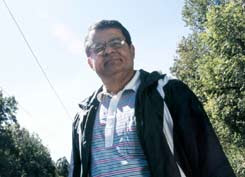 Chemical & Engineering News
Rusi P. Taleyarkhan, the Purdue University nuclear engineer who achieved notoriety for his controversial claims to have achieved "tabletop" nuclear fusion by sonoluminescence, has been stripped of his named professorship in the wake of an academic committee's conclusion that he committed research misconduct.

Taleyarkhan, who was Arden Bement Jr. Professor of Nuclear Engineering, will remain on the Purdue faculty but with the title of Special Graduate Faculty.

In July, an academic committee determined that Taleyarkhan had been heavily involved in a supposedly independent replication of his work, which they concluded was research misconduct (C&EN, July 28, page 14).

"In my judgment as Purdues chief academic officer, it is inappropriate for a faculty member who has been found guilty of research misconduct to hold the title of a named university professor," Purdue Provost William R. Woodson said in a statement to Taleyarkhan on Aug. 27.

Taleyarkhan also will not be allowed to serve as a major professor for graduate students for the next three years, Purdue officials announced.

In 2002, while he was a scientist at Oak Ridge National Laboratory, Taleyarkhan performed experiments in which he bombarded deuterated acetone with high-energy sound waves, causing bubbles to form, expand, and implode with great energy (Science 2002, 295, 1868). Taleyarkhan claimed he had observed characteristic radioactive particles that suggested deuterons had fused in the implosion. The possibility that Taleyarkhan had discovered this long-sought-after, almost limitless energy source became an international sensation.

But many scientists were skeptical, and after several labs failed to replicate Taleyarkhan's difficult experiments, criticism of his work grew more vocal.

Taleyarkhan appealed the July decision, but his request was denied by the university's appeals committee. The case will be reviewed at the end of three years to determine whether Taleyarkhan will be reinstated as a full professor, Purdue officials said.

Purdue University in the US has announced how it will reprimand Rusi Taleyarkhan after an internal committee ruled in July that he is guilty of scientific misconduct.

Taleyarkhan, a nuclear engineer who claimed the discovery of "bubble fusion" in 2002, will lose his title of Al Bement Jr Professor of Nuclear Engineering and will not be able to be thesis adviser to graduate students for at least three years.

In July the university concluded that he had cited a paper by researchers in his own lab as if it were an independent confirmation of his alleged discovery of bubble fusion.

"In considering the sanctions to impose, I have been guided by the principle that the sanctions should address and be proportional to the specific findings of the research misconduct," Purdue provost Randy Woodson wrote in a letter to Taleyarkhan that outlined the disciplinary actions.

Woodson added that the university will review Taleyarkhan's conduct after three years, to determine whether he can apply for reinstatement as a full faculty member.

Taleyarkhan believes that the decision is unreasonable. "The sanctions are unfair and egregious in their severity," he told physicsworld.com. He pointed out that a previous Purdue committee had exonerated him of misconduct charges in 2006, and that the latest committee absolved him of most charges of research misconduct.

The university started its latest investigation, involving "new allegations" of falsifying the research record, he said, "following political pressure from Congress motivated by articles in Nature." Overall, he continued, "the university system has failed miserably and taken the expedient way out."

What will happen next? Taleyarkhan, who has initiated a civil lawsuit against the university, does not entirely discount further legal action. "As a faculty member and a US citizen," he said, "I have a right to appeal the findings along with seeking redress from the courts of the United States for the extensive damage caused to me and several others."

His lawyer, Indianapolis attorney John Lewis, said that "given the way Purdue administrators have handled this matter, Dr. Taleyarkhan has many options in the judicial system." However, Lewis continued, "after years of fighting and being overwhelmingly successful against his detractors, he may not want a further part in this aspect. Rather he may choose to focus on his teaching and research."

Taleyarkhan argues that the affair has not damaged the credibility of his research. "The matter . . . will not affect bubble fusion research," he declared, "as the final two allegations have nothing to do with the science which, as a consequence of this overall ordeal has been further vetted and strengthened in terms of its credibility."

The controversy began in 2002 when Taleyarkhan, who was then working at the Oak Ridge National Laboratory in Tennessee, co-authored a paper in Science in which he reported firing a barrage of ultrasound waves into a liquid mixture of benzene and acetone (Science 295 1868). He claimed that bubbles of gas, which emit flashes of light when the sound waves force them to expand and collapse, could reach such high temperatures and pressures that during this process fusion reactions are initiated.

Several groups, however, failed to replicate the research, while two other Purdue engineers — Lefteri Tsoukalas and Tatjana Jevremovic — complained that Taleyarkhan had tried to prevent them publishing their negative results. An internal investigation last year cleared Taleyarkhan of that charge, but when critics argued that the panel had not taken their views into account, Purdue began a second investigation. Although the committee completed its work in April 2008, Purdue did not issue the report until July when the Office of Naval Research, which funded Taleyarkhan's research, had accepted it.