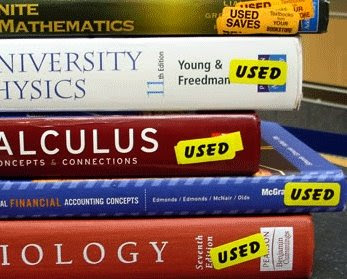 Well, it is a start. Despite the expense of the books and the fact that something is being done to assist students with the texts, it is still cool to have a real book at hand.

The Los Angeles Times
The annual college textbook rush starts this month, a time of reckoning for many students who will struggle to cover eye-popping costs of $128, $156, even $198 a volume.

Caltech economics professor R. Preston McAfee finds it annoying that students and faculty haven't looked harder for alternatives to the exorbitant prices. McAfee wrote a well-regarded open-source economics textbook and gave it away -- online. But although the text, released in 2007, has been adopted at several prestigious colleges, including Harvard and Claremont-McKenna, it has yet to make a dent in the wider textbook market.

"I was disappointed in the uptake," McAfee said recently at an outdoor campus cafe. "But I couldn't continue assigning idiotic books that are starting to break $200."

McAfee is one of a band of would-be reformers who are trying to beat the high cost -- and, they say, the dumbing down -- of college textbooks by writing or promoting open-source, no-cost digital texts.

Thus far, their quest has been largely quixotic, but that could be changing. Public colleges and universities in California this past year backed several initiatives to promote online course materials, and publishers and entrepreneurs are stepping up release of electronic textbooks, which typically sell at reduced prices.

McAfee is a leader in his academic field, a featured speaker at the Yahoo Big Thinkers India conference in March. Tall and genial, he dresses in khakis, a polo shirt and geeky river sandals. A coauthor of the best-selling book "Freakonomics," Steven D. Levitt, has described him as brilliant. What McAfee is not is anti-capitalist.

"I'm a right-wing economist, so they can't call me a communist," McAfee said.

Yet he turned down $100,000 to turn over his open-source textbook "Introduction to Economic Analysis" to a commercial publisher.

"What makes us rich as a society is what we know and what we can do," he said. "Anything that stands in the way of the dissemination of knowledge is a real problem."

McAfee said he wrote his open-source book because the traditional textbook market is broken. Textbook and college supply prices nearly tripled between 1986 and 2004, an audit by the federal Government Accountability Office found in 2005. With costs continuing to climb, it would be "reasonable to conclude that [individual student] expenditures can easily approach $700 to $1,000 today even after supplies are subtracted," the congressional Advisory Committee on Student Financial Assistance said in a 2007 report.

"Publishers have broken an implicit contract with academics, in which we gave our time and they weren't too greedy," McAfee wrote on the web page for his book. McAfee said many publishers, going for the lowest common denominator, were making some books too simple.

Representatives of the textbook industry say they have invested in new products because instructors have demanded it.

"Do you think all these PhDs are so lazy, so stupid they buy junk?" asked Bruce Hildebrand, the Assn. of American Publishers' executive director for higher education. "God bless anybody who has got the energy and commitment to put three, four, five years of labor in on a book and then give it away."

Just mention textbook prices to university students and the response is outrage and a willingness to switch to online readings.

"I spent definitely over a grand on textbooks last year, and I did buy [used] off Amazon.com," said Matt Shiu, 18, a business economics major at UC Irvine.

"I'd rather do my reading on the computer," said engineering major Weheb Waheb, 20.

But sales of all electronic college materials -- CD-ROMs, e-books and online courses -- represented only $241 million of $3.5 billion in U.S. sales by major publishers in 2007, despite the fact that they typically sell at a discount, according to the Assn. of American Publishers. Free and open-source digital texts left too small a footprint to measure, experts said.

"For all its popularity in the press and on blogs, [online textbooks are] all very marginal now," said Frank Lyman, executive vice president of CourseSmart, a commercial e-book company.

Open educational resources is an amorphous category for publishers, but basically it includes e-textbooks, courses, videos, taped lectures, tests, software and other materials released online free to the public without restriction on use.

Universities for more than a decade have experimented with open-source educational sites and online libraries as a way to spread knowledge more equitably. Some seek to change the nature of the textbook by offering "chunks" of instruction that professors can mix and match to create their own content "collections."

Other open-source textbook projects have a subversive edge. Founders or advocates refer to themselves as "co-conspirators," profess a do-it-yourself ethic and declare an intent to overthrow the textbook industry.

Wikibooks, a collection of textbooks "anyone can edit," is based on the popular Wikipedia model, which invites users to make and correct entries.

In one inmates-take-over-the-asylum scenario, Old Dominion College in Virginia had students compete to write chapters in a wikibook on the "Social and Cultural Foundations of American Education." Students voted for their favorites, and faculty chose the best versions.

California State University is developing what it calls the Digital Marketplace, a website for selecting, comparing, sharing, approving and distributing both open-source and commercial online educational materials.

One of the biggest pushes for open educational resources has come from California community colleges, where students devoted nearly 60% of their education spending in 2007-08 to textbooks, according to a California State Auditor's report released last week.

The Foothill-De Anza Community College District in the Silicon Valley has teamed with the state's other two-year colleges to encourage faculty to create, use and select digital textbooks. The California Community Colleges Board of Governors voted in May to back open educational resources.

"One of the most heartbreaking things you can see is a student in the bookstore with a course catalog in one hand looking at the book prices to see what courses he can afford to take," said Hal Plotkin, a Foothill-De Anza trustee who was instrumental in the drive.

Several experts said a strong shift by California's public universities to open-source textbooks could be the jolt that brings them into wider use.

But the open-book movement will face competition from commercial e-book publishers, including CourseSmart, which this fall will begin offering digital versions of 4,300 widely adopted textbooks at half the price of print editions. Flat World Knowledge, a new company, plans to subsidize free digital titles starting next year, with sales of other materials and printed editions.

Diane Harley, principal researcher at the Center for Studies in Higher Education at UC Berkeley, said professors weren't going to embrace digital course materials unless they were high quality and tailored to their often unique scholarship.

"Faculty are independent, they love their fields, and they hand-craft their courses," she said.

McAfee has high hopes for an enhanced version of his book that FlatWorld Knowledge plans to release this year.

"A whole bunch of people don't have access to knowledge. The knowledge in college textbooks, thousands of people hold that knowledge, those skills," he said. "And there's no reason for a small amount of money they couldn't produce books that are pretty good, and provided for free."